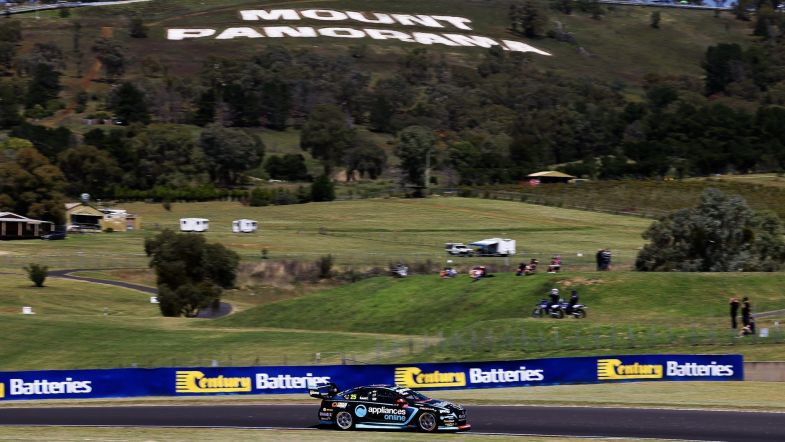 A clean-sweep of Friday’s practice sessions for the 2021 Supercars season opener at Mount Panorama has put Chaz Mostert in good stead for his first race win in over a year, the Walkinshaw Andretti United driver going quickest in both hour-long sessions.

The 2014 Bathurst 1000 winner was winless last year in his first year with WAU but showed improvements throughout the year, culminating in a podium finish at the final round but went close to replicating the pole time from last year’s Bathurst 1000.

From a half-second margin to second place in the opening session to just being up by one-hundredth of a second in the day’s closer, Mostert finishes the day with his name in P1 after two hours of practice.

The hour-long opening practice session for the year was marred only by one incident, Erebus Motorsport driver Will Brown finding both the inside and outside walls at the Dipper which brought the #9 car to a halt and the red flag out.

Higher temperatures than the last Bathurst hit-out in October led to a low-grip track surface which failed to net quick times until the closing minutes of the session where Chaz Mostert bolted to first place with a 2:05.2056 in the #25 Walkinshaw Andretti United Commodore, going half a second faster than the next car.

Reigning Bathurst 1000 polesitter Cam Waters slotted behind his former Tickford Racing team-mate in second, being the fastest Ford Mustang despite ending up half a second down on Mostert and just over two-tenths ahead of third-placed WAU driver Bryce Fullwood.

Though he led most of the session, Shane van Gisbergen’s best time only netted the defending Bathurst 1000 winner 12th on the timesheets, eight spots behind Triple Eight team-mate Jamie Whincup with Andre Heimgarter taking the honours of the quickest Kiwi for Kelly Grove Racing, just behind Whincup in fifth.

Brad Jones Racing had a tough start to the second practice session with both the #14 of Todd Hazelwood and the #96 of Macauley Jones suffering issues within moments of each other. While Hazelwood’s car had a power steering issue coming out of Hell Corner to start his lap, Jones ran out of brakes into The Chase soon after, ending up buried in the sand trap which triggered a red flag.

Though track temperatures kept rising throughout the afternoon, Scott Pye dipped below the 2:06 marker for Team 18 before the halfway mark though was soon eclipsed by Mostert who went even faster than his practice one effort, a 2:05.1039 going close to the first 2:04’s of the weekend.

With 15 minutes left on the clock, Mostert’s time still stood at the top but fresh Dunlop tyres started to be bolted on to the competition, looking to do their qualifying simulation runs for tomorrow’s 20 minute sessions.

Waters soon lit up the timing screens with only five minutes to run, setting session best sectors all round to do a 2:04.7928 but his rivals were quick to chase with van Gisbergen on track for a personal best until he ran off at The Chase.

Mostert lowered the bar in the first sector but despite dropping time in the middle sector he was able to go back to the top of the standings with a 2:04.7817, a time which no one could better before the end of the session, completing a clean-sweep of Friday for the WAU driver.

Pye ended up third after heading up a portion of the session while the Blanchard Racing Team car of Tim Slade posted up the fourth-best time, a strong result for Slade who spent 2020 on the sidelines after losing a full-time drive at the end of 2019.

Qualifying for tomorrow’s opening race of the season starts at 0905 local time, followed by a Top Ten Shootout at 1110 which leads to race one, going green at 1400.