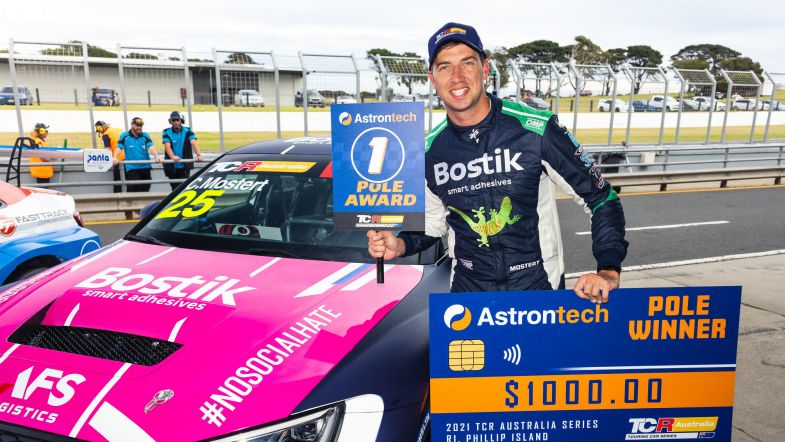 Chaz Mostert was able to build on the pace he showed in Friday practice at Phillip Island to secure his first TCR Australia pole ahead of the second round of the season.

With rain in the air, qualifying kicked off with the opening ten minute session being used to determine who would make it through to the top ten shootout.

Nathan Morcom would lead the way in his Hyundai i30 N TCR but it was a close run thing as Chaz Mostert – who had topped opening practice on Friday – ended up less than a tenth of a second behind in his Audi, with the similar RS 3 LMS of Luke King going third – albeit three tenths of a second off the fastest time.

Tony D’Alberto in his Honda was fourth quickest, with Lee Holdsworth in the first of the Alfa Romeos being the final driver to manage a lap within half a second of the pace.

The second phase of the session saw King set the early pace before Holdsworth moved into P1, but Mostert’s Audi then became the first car to break the 1m 36s mark in the Audi; breaking the TCR qualifying lap record to go onto provisional pole.

Mostert then improved again on the following lap to establish an advantage of nearly three tenths of a second over team-mate King, with Holdsworth’s Alfa Romeo the only other car within half a second of the benchmark time.

Despite the best efforts of the rest of the field, Mostert’s time would prove to be unbeatable as the Supercars regular clinched top spot on the grid from King and Holdsworth, with Michael Caruso surviving a sideways moment going into turn ten to make it an all Alfa Romeo second row.

“We tuned the car a bit for the second session and it was great – I’m pleased to get pole,” he said. “I was a bit nervous going into Q2 but it’s great to give the guys top spot. With the possibility of rain, it’s best to be at the front.”

Ben Bargwanna secured fifth spot in his Peugeot, with John Martin leading the Honda challenge in sixth. Morcom would be unable to repeat his Q1 performance as he ended up seventh in the Hyundai, with the top ten rounded out by Aaron Cameron, Josh Buchan and D’Alberto.

There were some notable names outside the top ten however, with Dylan O’Keeffe the best placed driver not to make it through to the shootout in his Renault Megane; his time being less than half a second behind Caruso would manage in Q1.

“We knew the Renault would be a challenge and we some work to do,” O’Keeffe said. “We were okay in practice and hoped for top five so I’m not sure what happened. We missed the mark a bit and I’m hoping for a wet race.”

Fellow Renault racer James Moffat was also also left scratching his head down in 15th spot on the 20 car grid, but that was still ahead of Jordan Cox, with the championship leader finding himself in 16th spot and with work to do in the three races.

“We’ve just got no pace,” the GRM driver reflected. “We tried to maximise the tyres and the car felt good, but we aren’t quick. We have to try and find something for the races.”