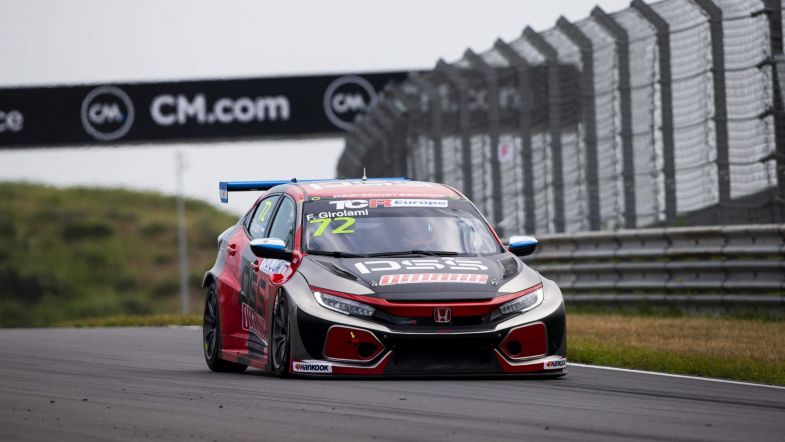 The session, already delayed in starting due to barrier repairs caused by an earlier support bill championship, was hit by rain throughout and only got worse, forcing the organisers to call a premature halt to proceedings.

Until that point, Girolami had been the quickest driver having posted a time of 1:45.325, nearly two-tenths of a second quicker than FP1 pacesetter Tom Coronel.

Indeed, Comtoyou Racing’s Coronel had been at the top of the standings for a few minutes at the start of the session, which was headed early on by the Brutal Fish Racing Honda Civic Type-R of Jack Young.

Young was the first driver to set a fully representative lap time amid damp track conditions, on a 1:45.520, a full six-tenths of a second quicker than Janík Motorsport’s Mat’o Homola.

Coronel then went fastest by just two-hundredths of a second from Young, while his team-mate Dušan Borković, who was second in FP1, improved to third.

Having shown strong pace in the opening session, Girolami took his Honda Civic Type-R TCR to the top of the pile with a 1:45.478, again just two-hundredths quicker than Coronel.

Unlike the opening session, improvements were few and far between as the damp circuit conditions made things slippery and unpredictable.

Girolami found some extra speed in his PSS Racing Civic to go fractionally quicker than Coronel, before extending his margin to nearly two-tenths of a second with his second flying lap of the session.

The Argentinian then held onto his place at the top of the standings for the remainder of the scheduled 30-minute session.

Behind Young was Borković and Homola, with Sébastien Loeb Racing’s Niels Langeveld again the top Hyundai in sixth.

Klim Gavrilov was seventh quickest, proving that Audi’s weight loss for this weekend has given them the much-needed pace boost following a difficult opening two rounds of the season.

He headed another Audi RS 3 LMS of Nicolas Baert, while the top 10 was rounded out by a pair of Hondas, with Brutal Fish Racing’s Isidro Callejas ninth ahead of PSS Racing’s Viktor Davidovski.

Attentions now switch towards qualifying which is scheduled to take place on Saturday at 11:00 CEST.