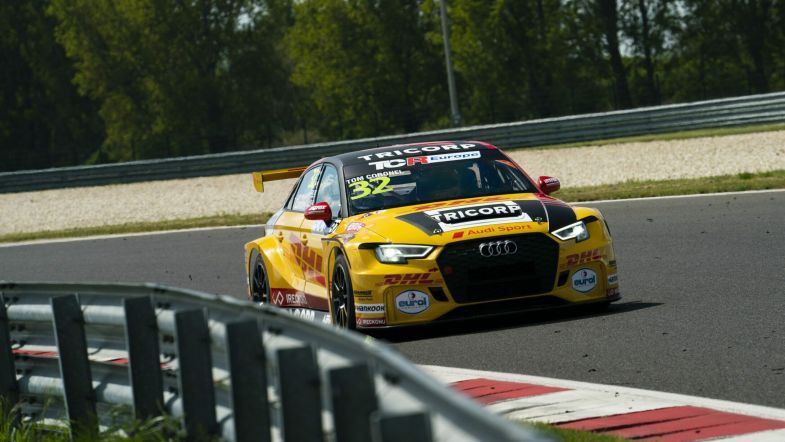 Competing on home soil, Coronel set a best time of 1m45.476 to finish just over a tenth-and-a-half clear of Borković in a session which was ended prematurely due to oil being dropped at Turns 11 and 12 late on.

The Audi drivers came into the weekend with a significant weight break following a difficult opening two rounds of the season so far, and made that advantage pay off as the brand largely dominated the 30-minute session.

Coronel’s team-mate Nicolas Baert was the early pacesetter in the third Comtoyou Racing Audi RS 3 LMS, posting a time of 1m46.663, some two-tenths quicker than the initial leader Mat’o Homola in his Hyundai i30 N TCR.

Sébastien Loeb Racing’s Niels Langeveld then hit the top of the standings, going half a second faster than Baert, but Coronel set the overall best time in the second sector of the lap by a quarter of a second to go fastest soon after.

Coronel’s time was never beaten after that and, despite a lull where improvements were few and far between, Borković shot up to second in the closing stages before the red flag to demonstrate a real turn in fortune for the Audis this weekend.

Also showing pace in third was the PSS Racing Honda Civic Type-R TCR of Franco Girolami, who ended up just a tenth of a second adrift of Borković, while Langeveld was the best Hyundai Elantra N in fourth.

Janík Motorsport’s Homola and the VRC-Team Audi of Klim Gavrilov rounded out the top 10.

Title contenders Mehdi Bennani (Sébastien Loeb Racing Hyundai) and Team Clairet Sport’s Jimmy Clairet endured something of a quiet session, finishing 14th and 15th respectively. Both drivers have weight compensation added to their cars for this weekend, but struggled to challenge the top 10 in opening practice.

Next up for TCR Europe is the second practice session which is scheduled to take place at 16:40 CEST.