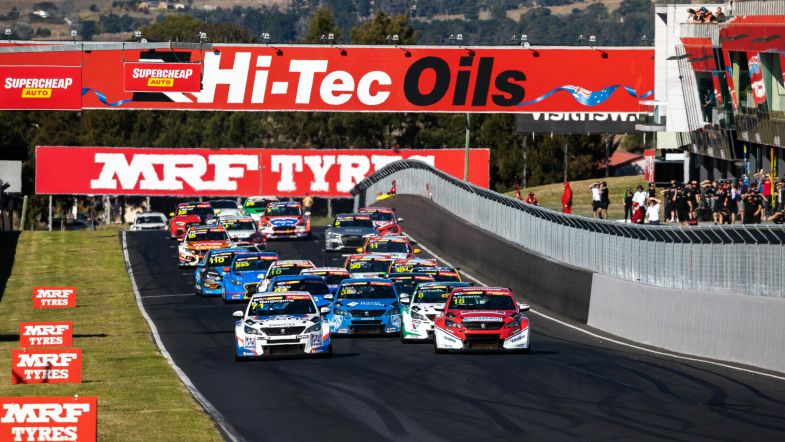 Aaron Cameron completed a superb lights-to-flag drive to lead a Peugeot one-two-three in the opening TCR Australia race of the weekend at Bathurst.

Team GRM’s Cameron recovered from an early challenge from Ben Bargwanna at the first corner to open up a healthy 2.863 margin and was never headed.

Schaeffler GRM driver Dylan O’Keefe finished a distant third, while title contender Jordan Cox suffered a blow to his hopes of reclaiming the series lead as a mechanical issue forced his retirement on the fifth lap of 10.

From pole in Race 1, Cameron initially appeared to bog down off the line, leaving the Peugeot 308TCR vulnerable to Bargwanna as the field negotiated the first corner.

Bargwanna kept his foot in around the corner and the pair momentarily went side-by-side down Mountain Straight, with Cameron prevailing before turn two.

Jumping a place on the grid at the start was the Swiftyx 308TCR of Cox, who had originally qualified second, but was demoted to fifth after an infringement earlier in the day.

But Cox’s chances were quickly derailed after an overheating issue forced him to stop the car at the half-distance marker.

Cox had been looking good to move back into the lead of the standings with Wall Racing’s Tony D’Alberto down in ninth following a lively battle with MPC Team Audi’s Will Brown and the HMO Customer Racing Hyundai i30 N TCR of Bailey Sweeny.

The Peugeot’s retirement was the only blemish on an otherwise perfect start to the weekend for the brand, with Cameron coming home 2.863s clear of Bargwanna at the flag.

Brown finished just off the podium in fourth, having progressed from eighth on the grid in his Audi RS 3 LMS, while James Moffat put a disappointing opening two rounds to bed with a strong fifth in his LMCT+ Racing GRM Renault Mégane.

Sitting in for Fabian Coulthard – who tested positive for COVID-19 pre-weekend – at Wall Racing, Tim Slade finished a well-deserved sixth place on his first outing in the series.

D’Alberto was seventh ahead of Josh Buchan and HMO Customer Racing team-mate Sweeny.

The race was another disaster for AWC MPC Racing’s Jay Hanson, who failed to finish in the spare Audi RS 3 LMS TCR, having switched from his original car following a crash in practice.