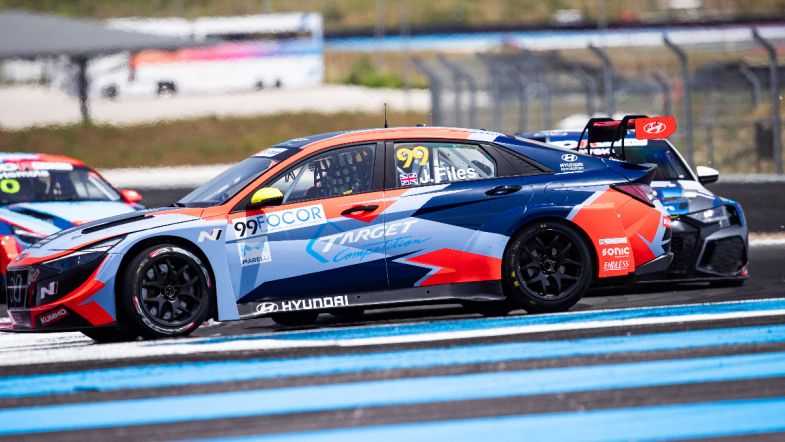 Target Competition’s Josh Files was pleased to get an eighth place out of a tricky TCR Europe Race 1 at Paul Ricard, as his Hyundai Elantra N TCR was inflicted by electrical gremlins.

Files qualified third, four tenths of a second off the pace of poleman Tom Coronel, but dropped down to 11th at the start as an issue struck as he moved off the line. He was able to regain several places, but was then clouted by Isidro Callejas and had to carry damage through the rest of the race.

Files revealed to TouringCarTimes the extent of his issues, in addition to 40 kilograms of success ballast he was carrying thanks to his podium in the season opener at Portimão.

“At the moment we don’t know, because we found a problem, I had no turbo pressure,” Files said when asked what the issue was that caused him to have a slow start.

“So we’ve been struggling a little bit this weekend with some electrical gremlins and we think this is another one, so the guys are working really hard with Hyundai to work out what’s going on. I’m sure they’ll fix it for tomorrow.

“I’m sure they’ll work it out, but, yeah, unfortunate because with the weight that I have, to do this qualifying performance was really incredible, and then to be stuffed in the start by an electrical issue is never nice. And from there you’re in the back, and I made some moves to regain some positions, and then I got destroyed in the last corner by another car that was making an opportunistic move on the car behind but misjudged it.”

The clash with a diving Callejas caused “quite a lot” of damage to the underside of Files’ car, and “the boot floor has been pushed up and it’s quite badly bent” too.

“But in the end, we still managed to race well, move forwards, eighth is not the greatest result considering, but given all the small issues we had it’s not the worst either.”

He will start eighth on the reversed grid for Race 2 on Sunday, and he is now third in the points behind Comtoyou Racing’s Audi RS 3 LMS-driving pair Franco Girolami and Coronel, the latter who won Race 1 despite smoking tyres. Files said tyre overheating was no issue for him in the Hyundai.

“No [overheating], we have a good set-up. For us, if we had the power of the Audi, we would destroy them, but we don’t. So until we do, we’re going to be where we are.

“It’s too early to even look at this [title battle]. We’re just here to try to win races, and then at the end of the year everything sorts itself out.”

Coronel said that once he was informed on the radio that Files had been slow off the line and therefore was not going to battle him for the win, his reaction was “that was a pity because I thought that was going to be a tough one”.