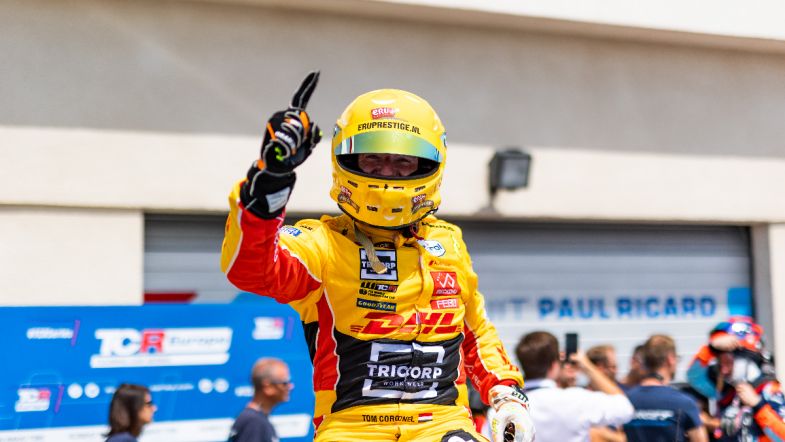 Comtoyou Racing’s Tom Coronel praised the driveability of his Audi RS 3 LMS en route to victory in TCR Europe Race 1 at Paul Ricard, despite burning his tyres during the race.

Coronel started on pole and led every lap to become team-mate Franco Girolami’s closest title rival after the first three races of the season.

“In the first corner I was looking for [Josh] Files; so I was a little bit confused and I thought ‘you know, I have to push the first few laps’, then I started to smell also the tyre and see a little bit of smoke, so ‘oo, oo’,” Coronel said of the start of the race soon after getting out of his car to celebrate victory.

“But it was a good control. I had a very, very easy car, a very easy car. Complete good feeling with the car and it was fully in control.

“It’s always great if your inputs is getting some outputs, because we always have a great effort in the winter time, also with my partners and my sponsors, and of course I’m never at home so this also sometimes gives some difficulties. But we took the one. Winner takes it all.”

He then promised to do the Coronel jump on his return to the TCR podium, and did just that for the photographers present.

Coronel was similarly as enthused about his and the car’s performance after qualifying, telling TouringCarTimes he did “one of the best laps of my life” to take pole.