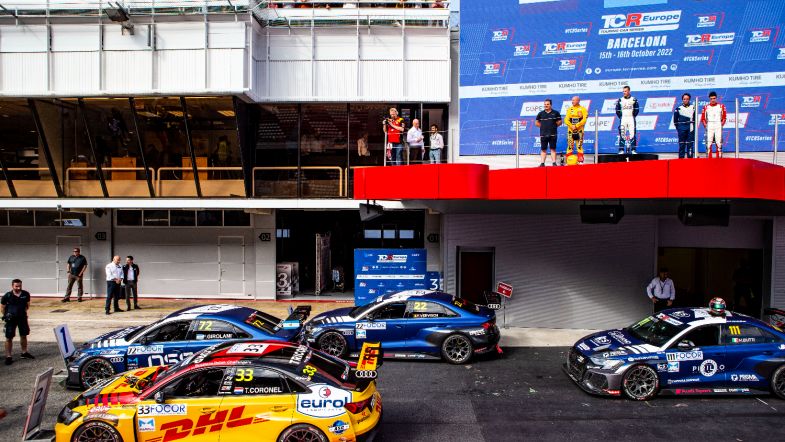 Comtoyou Racing has released a statement in response to the one issued by TCR Europe rival Target Competition, which accused the Belgian team of alleged data theft.

Target’s statement on Sunday morning detailed how on Friday it ‘learned about the theft of a season’s worth of onboard videos, including winter testing by a competitor team’, and said an ‘engineer of the competitor Comtoyou Racing stole a Target Competition hard drive’.

Following that statement, and after the final race of the season, members of the two teams met in the Barcelona paddock and some strong words from Comtoyou team manager François Verbist were sent Target’s way.

TouringCarTimes spoke to both teams in the afternoon, as well as paddock witnesses of the heated encounter, with Comtoyou team principal Jean-Michel Baert claiming that ‘officially I am not aware there is a statement, so I don’t have any comments’.

Later in the day however, Comtoyou issued its own statement to deny the allegations made.

“We read this Sunday at 1pm the statement published on Instagram by Target srl, competitor of the TCR Europe 2022. This statement was also relayed by TouringCarTimes at 4pm.

“In no case did Comtoyou Racing steal data or videos from the competitor, and in no case did we refuse a meeting to talk about it. These statements are purely and simply false and defamatory.

“We formally dispute the allegations contained in this communication and we request the publications be immediately removed and that an official denial be immediately published by the competitor. We demand that these points be respected, otherwise we will file a complaint with the authorities within 24 hours for slander and defamation.”

Comtoyou’s weekend was otherwise full of celebrations as it won the teams’ championship to put alongside the successes of Franco Girolami, Viktor Davidovski and Marco Butti, who won the overall, the Diamond Trophy and the rookie classification this season.