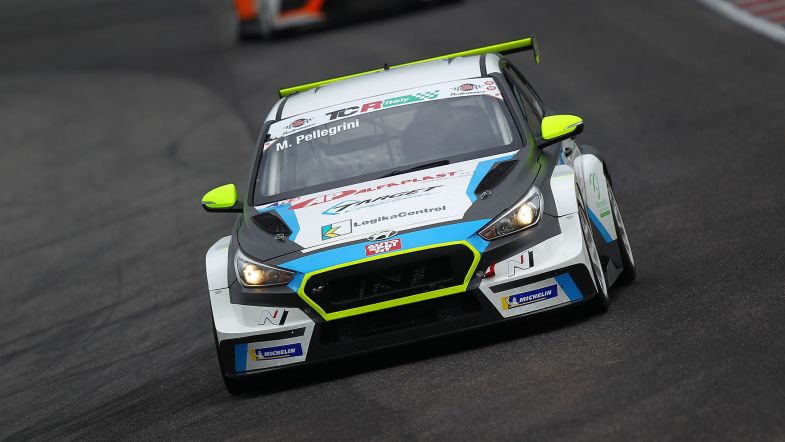 Marco Pellegrini takes his first win of the season at Misano

Target Competition’s Marco Pellegrini at the wheel of a Hyundai i30 N TCR made the most of an incident-packed opening race to take his first win of the TCR Italy season ahead of Enrico Bettera and Eric Scalvini at Misano.

At the start, Audi driver Bettera took the lead of the race followed by Scalvini and Max Mugelli, although Jacopo Guidetti’s Audi RS 3 LMS was unable to get off the starting line and retired on the main straight.

Andrea Argenti, at the wheel of an Opel Astra TCR, spun off the track at Turn 10 on lap seven, with the safety car coming into action and closing the pack together.

The race was restarted on lap nine, with Pellegrini attacking Scalvini for third place. At the front, Tavano put pressure on Bettera, taking the lead on lap ten as Pellegrini took third place from Scalvini. Behind, series newcomer Igor Stefanovski gained ground at the wheel of his Cupra TCR, closing the gap to Scalvini.

Pellegrini climbed up to second place on lap 11, as Felix Wimmer and Mugelli made contact, with the Italian ending his race in the gravel trap.

Tavano, however, stopped with a mechanical problem on lap 12, leaving Pellegrini in the lead and fending off Bettera’s attacks in the closing stages to take his first win of the season, despite sliding wide at Turn 14.

Scalvini took the last step of the podium, ahead of Stefanovski and Matteo Bergonzini, with a Cupra TCR. Wimmer was sixth ahead of team-mate Peter Gross.