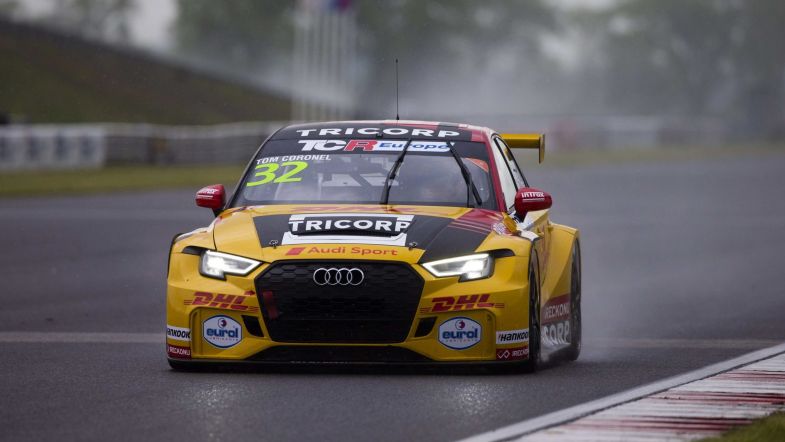 Tom Coronel not reading much into practice pace despite “good feeling”

Friday’s second practice pacesetter Tom Coronel says there is still a long way to go in the opening TCR Europe Series weekend of the season at the Slovakia Ring, despite feeling confident with his Comtoyou Racing Audi RS 3 LMS.

The Dutchman, who has a strong track record at the 5.9km circuit over the years, was the fastest driver in a rain-affected FP2 despite not planning to run at all in the half an hour session.

Rain is not expected to play a part in the remainder of the weekend, with Coronel downplaying his rapid times in the afternoon.

“I have a good feeling with the car. I always do well here in Slovakia, I’m quite strong. Out of the seven WTCR and WTCC races we have done here, I won three times.

“So, I don’t know, somehow it’s really good for my feeling and very technical, a good mixture between high-speed and low-speed. So, at the moment, I’m confident but we have to be here on Sunday.”

Although Coronel believes practice performance will not have a bearing on the rest of the weekend’s form book, the Comtoyou Racing driver says he is happy with the overall balance of his Audi ahead of Saturday’s qualifying.

“This result is very good for the confidence,” Coronel added.

“At first, we weren’t even thinking about driving [in FP2] and then two minutes before the session, my engineer said to me that he would like to try some things with the tyre pressures.

“So, I went out and directly had a good feeling with the car so I pushed it. Then we changed a few things with the tyre pressures and that made another step.”

Coronel admitted to “playing” with the car during the second practice knowing that the weather forecast is expected to be dry for the two races. But his dry pace was also evident and good enough for third fastest and just under half a second slower than Volcano Motorsport’s Mikel Azcona.