Racing is said to drive the technology for road cars forward. Most of the cars used the best in quality tyres and high speed performing engines, which is one of the most thrilling factors of the race. Sometimes it drives the development of special models. TouringCarTimes has put together an article series which features the road cars of touring car racing. The article series begins with the Alfa Romeo 155 Silverstone. A car that won the British Touring Car Championship 1994 in the hands of Gabriele Tarquini.

This car was the actual reason for the biggest rule change in the history of the Super Touring rules.

Alfa Romeo joined the BTCC in 1994 with drivers Gabriele Tarquini and Giampiero Simoni. The success was immediate, Tarquini won the title and Simoni finished fifth. But the car spawned a lot controversy.

Alfa Romeo had won the Italian championship before joining BTCC. To prepare for the very tough competition of BTCC, Alfa Romeo developed a special version of the car: The Alfa Romeo 155 Silverstone.

The road car version had to be produced in 2 500 examples to be allowed to compete in the BTCC. Despite the huge cost for Alfa Romeo, all 2 500 cars were produced. 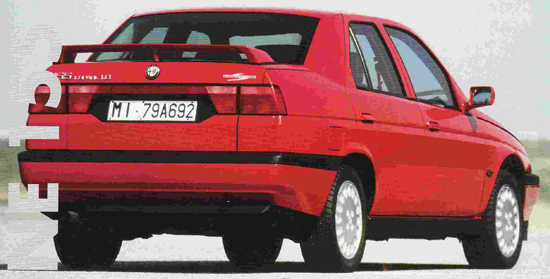 The aerodynamical advantage for the road cars were insignificant, but for the race cars the advantage was very significant.

As Alfa Romeo won the first five races, the other BTCC manufacturers were quick to protest.

The controversy culminated during the seventh race of the season at Oulton Park. Alfa Romeo was told by the BTCC organisers to run with the spoilers retracted. But the Italian manufacturer had none of it, claimed that their cars were within the rules and left the track in protest. 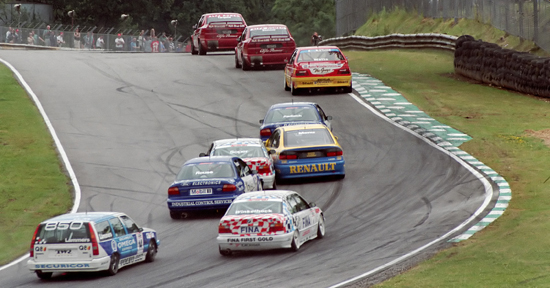 Alfa Romeo accepted the rule change and returned to the following round with the rear spoiler retracted but the front spoiler still extended. While the others got closer to the Alfa’s after the rule change, Tarquini kept winning races and had a big point gap. Tarquini won the title in style.

Due to the controversy sparked by this model, the Super Touring rules were changed for the following season. Wings became compulsory for all competitors in a standard form and the road car models had to be produced in 25 000 examples.

But it was not only the wings that were special with the Alfa Romeo 155 Silverstone.

The cars were build by Alfa Corse in Turin where the chassis was specially prepared to be as light and strong as possible. Unnecessary brackets and mountings were removed and special welding was made. The end result was a chassis that was twice as stiff as the road car and 40 kilos lighter than the minimum weight limit.

The race engine was different. It was based on another inline four cylinder engine that had been used by Fiat in rallying.

The head of the engine was taken from the 155 Q4 turbo-model, but rotated 180 degrees. The rotation of the head allowed for better cooling of the engine and a lower base of weight.

As with all Super Touring specification engines the re build intervals were small. The engines had to be rebuild every 700 km, a process taking a total of 80 hours to complete.

While the 155 Silverstone-edition brought Tarquini a superior victory in 1994, the story was another the year after. The team struggled to follow the performance jump during the winter for the 1995 season compared to the other teams. 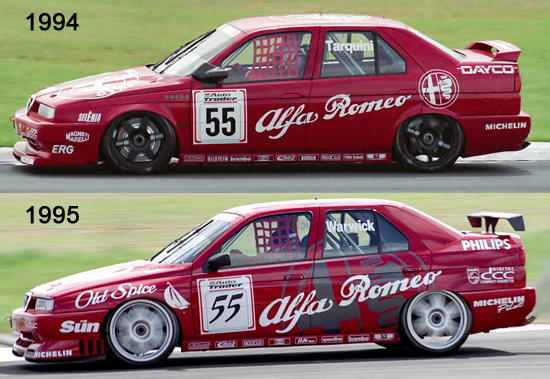 Team Prodive took over the development of the cars and previous Formula One driver Dereck Warwick joined the squad.

While the 155 was out paced in BTCC, it continued to take victories in other championships like Italy, France and Spain before being replaced by the newer 156-model in 1998.

The Road cars of Touring Car Racing next week: The Volvo 240 Turbo Evo. Volvo were right in the middle of the Group A racing era with the 240-model. Supposedly 500 Volvo 240 Turbo Evo cars were built, but how many did actually see the light of day? And what was so special about them?

Find out next sunday!