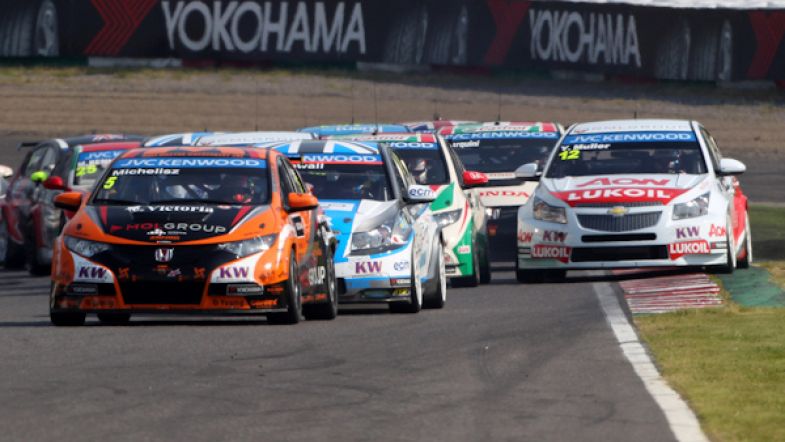 The championship will see all new 2014 specification Super 2000 cars come to the fore in the Championship. The new regulations have been brought forward a year early to expedite the entry of Citroën into the championship, which will see three manufacturer backed teams on the grid in 2014.

Citroën have already confirmed their intentions to run three cars full-time in 2014, with nine-time WRC champion Sébastien Loeb joined by four-time WTCC champion Yvan Muller at the French team. The team are testing a number of hopefuls for a third car, which they say they will not announce until early in 2014, one of which is known to be Argentinian José María López, a winner at his home race in the unfavoured BMW 320 TC of Wiechers-Sport back in August.

The team has also stated their intention to enter an additional car at selected rounds for Robert Kubica, should the Polish driver continue to work with Citroën next year in their World Rally Championship programme, as the former Formula 1 driver is known to be in talks with other teams about the WRC next season as well.

Honda have yet to announce their driver line-up for the two works cars they plan to enter. Or who will run their independent entries next year. The Japanese manufacturer plans to build four new Civics to the new regulations, with two cars operated by JAS and two cars entered privately.

Gabriele Tarquini and Tiago Monteiro are expected to retain their drives with the works team, whilst Zengõ Motorsport are expected to field at least one of the privateer entries for Norbert Michelisz, and perhaps a second for Gabor Weber, who competed in the first half of 2012 with the team. Moroccan Mehdi Bennani has also been linked to the fourth car, with Proteam potentially remaining in the championship and making the switch from BMW.

Lada have said they will enter two Grantas, with James Thompson in the middle of a three-year deal with the Russian marque, and it’s expected that he will be joined by a Russian driver, with Mikhail Kozlovskiy possibly staying on. The manufacturer is known to be being pressured by some of the WTCC’s independent teams to develop additional cars for sale, with the RML option likely to be too costly for some of the smaller team’s budgets.

RML will be building a number of cars for privateer teams, and as yet has not confirmed if it intends to enter cars themselves next season. The Wellingborough-based team, which has won the last four drivers’ titles with Yvan Muller and Rob Huff with the Chevrolet Cruze, this year as a privateer entry, will develop new Chevrolet Cruzes, which will require approval but not financial support from the US manufacturer to compete in the WTCC.

It is understood that six cars will be the minimum number of cars the British team will build, with two already confirmed to be raced by Silverstone-based bamboo-engineering next season, who’ve run with RML-built Chevrolets since their formation in mid-2009 in the British Touring Car Championship.

This will see a minimum of 15 cars, one short of series promoter Marcello Lotti’s target of 16 before he introduced only new regulations for the 2014 season.

There’s also one final manufacturer and team which may make a surprise entry to the Championship, though at this juncture it may end up being a late entry due to the development time needed.

SEAT have already confirmed that they won’t be building new cars for 2014, with the León Cup Racer, debuted at Salzburg, being targeted towards single-make platforms such as new Supercopa/Eurocup type series.

This leaves what is being dubbed in the paddock as ‘Class B’, which will be made up of the current Super 2000 (2011-spec) cars with 1.6 litre turbocharged engines. An upgrade package to minimise (but not balance out) the gap between the newer specification cars has been suggested by the FIA Touring Car Committee, but this will primarily be an engine upgrade, which BMW has already confirmed they will not be providing which will relegate the BMW 320 TC to either noncompetitive or not even eligible for the Championship, depending on the Committee’s final decision for the class.

A number of teams and drivers have already stressed their disinterest in competing in a second class where their car will be markedly slower compared to the front-running drivers, and so it is deemed this category will be relatively undersubscribed compared to ‘Class A’, with just a handful of drivers competing to bring up the numbers.

The same approach was taken in 2011 by the WTCC when the 1.6 litre turbo engine was introduced. Although Chevrolet was initially the only manufacturer on board with the concept, the take up was greater than expected, with BMW providing a new engine to customer teams and the privateer SEAT team of SUNRED Engineering developing their own unit to replace the SEAT TDI engine, which saw no full time entry in the class for the whole season, and the class crown won by Fabio Fabiani, who was effectively unchallenged after Aleksei Dudukalo upgraded his SEAT to the SUNRED 1.6 engine mid-season.

Other recent examples in championships with Super 2000 categories have seen similarly small ‘Class Bs’, such as the 2012 Scandinavian Touring Car Championship season – which allowed turbocharged S2000 cars conforming to S2000/Next Generation Touring Car hybrids (as per the 2011 BTCC) or the new 2011 WTCC 1.6 turbo machines competing against normally aspirated cars in the Semcon Cup. This saw only three cars entered for the full year in the Semcon Cup. This season, the BTCC has also allowed S2000 cars to compete for the Jack Sears Trophy alongside its NGTC-specification cars, but has seen as few as two cars entered in some races, with the majority of the grid now running the new NGTC cars.

Who will enter with these older cars in the 2014 WTCC is as yet unclear, with the majority of the current teams understood to be focussing on acquiring the newer spec cars or switching to other championships. Possible casualties are likely to include Liqui Moly Team Engstler and Münnich Motorsport, whilst some teams could graduate to run in the class from other formulae, or acquire the cars to compete in the FIA European Touring Car Cup, which will allow the S2000 2011 spec cars from next season.