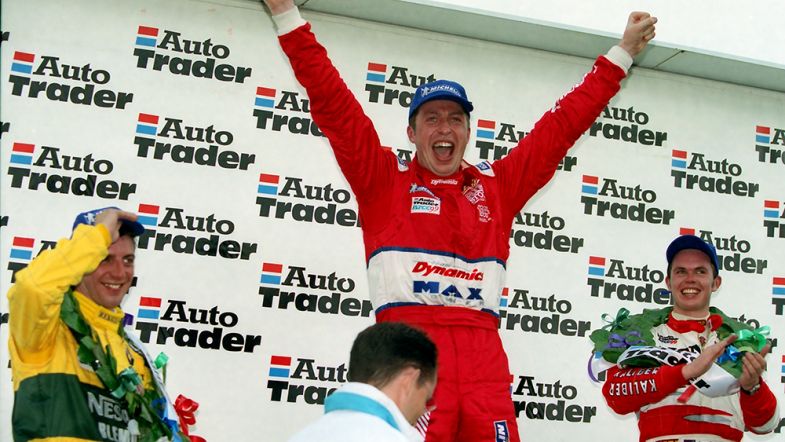 A triple BTCC champion and still a series front-runner as he hits 50, Matt Neal doesn’t need much introduction to touring car fans. But for many years, he was the fly in the ointment that embodied the independent spirit which still flows through the veins of the UK’s biggest racing series today.

It was with this in mind that TouringCarTimes caught up with the affable Midlander to look back on a seminal moment in his career, and a time when the Independent front-runner took giant-killing in the BTCC to another level.

The result at Donington Park in 1999 is one of the most famous in the BTCC’s history, but what went before it is perhaps less well-known.

Neal missed out on independent glory in 1998 despite finishing 13th in the overall championship, with Norwegian Tommy Rustad’s better finishing record netting him the title. Just weeks after the season finished, Neal finished a stunning second at the Bathurst 1000 (which, incidentally, would have been his pick of race had winner Rickard Rydell not selected it first!) and headed home for what turned out to be a career-defining winter.

An offer of test alongside Rydell in the title-winning Volvo S40 quickly turned into the offer of a race seat from TWR. But Neal turned it down to stick with Team Dynamics, a decision which helped pave the way for one of the most memorable moments of the Super Touring era.

“There was a tyre war then, with Michelin, Dunlop, Yokohama and Pirelli. It was all about getting hold of the right tyres. Nissan used to give us a decent car, but you were never allowed the factory tyres,” said Neal.

“After we came back from Bathurst, they changed the regulations so everyone got the same tyres. I remember thinking the car was just unreal on those things.

“I’d done some pre-season testing, and had the opportunity to get in the Volvo with Rickard.

“I had three days to decide whether I was going to jump. After I decided to stay with Dynamics, I remember telling Andy King at TWR that I couldn’t believe I was going to say no.

“In hindsight, it was one of the best things I ever did.” 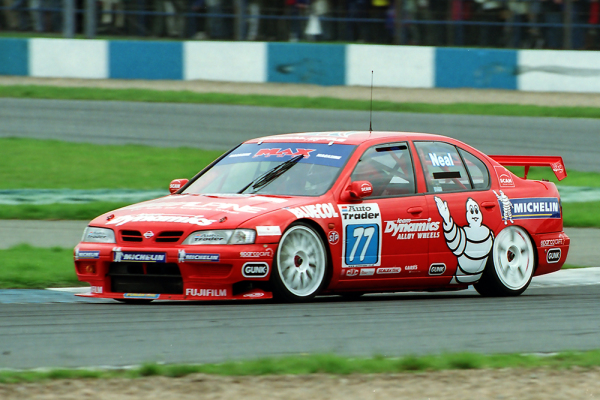 Arriving at the first weekend of the season, the carrot of the £250,000 cheque for the first outright Independent win was still being dangled by series supremo Alan Gow.

And Neal raised plenty of eyebrows in qualifying, securing a front row spot alongside pole-sitter James Thompson in the Honda Accord for the sprint race, before bagging pole for the feature.

The sprint didn’t quite go to plan, after a bad start left Neal stuck behind factory Nissan driver David Leslie – with team protocol meaning he wouldn’t attempt a pass unless he could make a clean move stick.

This meant all eggs went in the feature race basket in a bid to bag the £250,000, and after a good start, everything was going to plan. As well as his speed, Neal was confident his tyre choice would put him in a good position against Thompson’s Honda.

“I got into the lead and it was all looking hunky-dory,” said Neal. You had a choice of soft, medium or hard tyres and you would end up running a combination on the car – some would be stronger in left-hand corners and others in right-hand corners.

“We always knew that Thommo was going on the softer tyres, and we were on the harder tyres.”

But then came the moment which left everyone with their hearts in their mouths, as Neal stalled the car at his compulsory pitstop. He managed to fire the car back up, but the lead was gone. 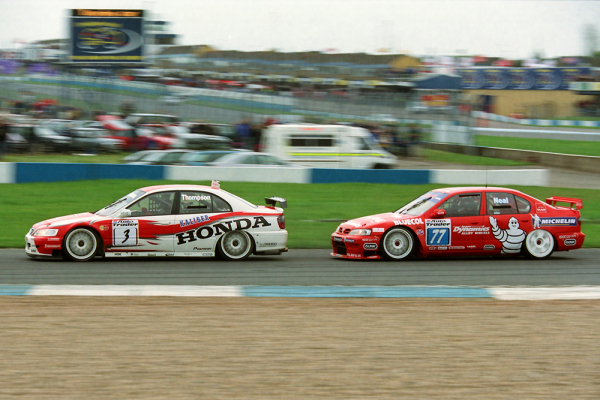 “I f***ed up the pitstop, stalled and went down to fifth, and there was an element of panic in my stomach, but I knew I still had time to come back,” said Neal.

“There was an element of luck, as that car was a b*****d to start when the engine was hot. I hit the starter button not expecting it to start, and it fired straight up.”

The battle back to the front then began in earnest, as Neal methodically picked off the cars in front of him, before passing Thompson for the lead at the Old Hairpin to the tune of huge cheers from the packed crowd.

“I nearly messed it up passing Rickard down the Craners, and when I put a move on Jimmy we both got sideways. That Super Touring Honda was never slow in a straight line, but I knew I still had time,” said Neal.

“Those cars were incredibly noisy. You couldn’t hear anything in the car. You used to get out at the end of the weekend and your ears would hurt.

“But when I passed Thommo, you could hear the roar in the car. It made the hairs stand up on the back of my neck. It was surreal.”

Co-commentator John Watson called it “complete automotive superiority” at the time, and few would disagree. The driver, car and tyres were all operating as one, and Neal rolled it home to beat Thompson by five seconds.

The image of Neal receiving the giant cheque from Gow is one of the most endearing of the era. And even that had a back story, as Neal explained.

“There was good prize money in those days, and Alan Gow always signed the cheques. Dave Richards was chair of TOCA at that time, and that was the first cheque he counter-signed!,” said Neal. 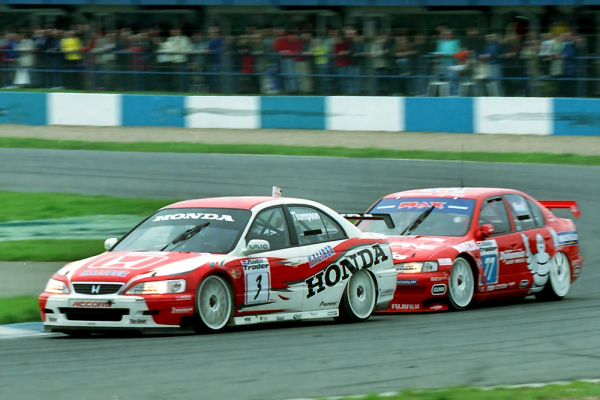 He may have been in the BTCC for several years previously, but the Donington win catapulted Neal into the spotlight like never before – an effect which still has ripples 15 years on.

Neal said: “People started coming up to me in the street, which was new to me.

“And people still come up to me and say ‘I was there’ or ‘I was a kid watching it on the TV’. It was the drama of the underdog leading the race, messing it up and then fighting back.

“Nigel Mansell was one of my heroes because he would always fight and scrap, and I wanted to do that.”

While his initial success tailed off a little as the factory teams ramped up their development, Neal nevertheless did enough to finish ninth overall in 1999, taking further podiums at Thruxton, Brands Hatch and Oulton Park.

He also romped away with the Independents’ title, with his tally of 353 points nearly double that of his nearest challenger, Mark Blair in the Vauxhall Vectra.

After the turn of the century, the roles were reversed for Neal, as Team Dynamics became a leading force in a championship no longer dominated by manufacturer teams.

As champion in 2005, 2006 and 2011, Neal was now there to be shot at as a de facto frontrunner, with the next generation of Independents looking to unseat him. Unsurprisingly, he has plenty of kind words for 2013 champion Andrew Jordan.

“I became the hunted! But I loved it. I always looked forward to those high-pressure races,” said Neal.

“People look at the relationship between me and my Dad and it’s the same as Andy and Mike Jordan. They just wanted to beat the factory cars, same as us, which was why when Andy won the championship, I was the first person to congratulate him.” 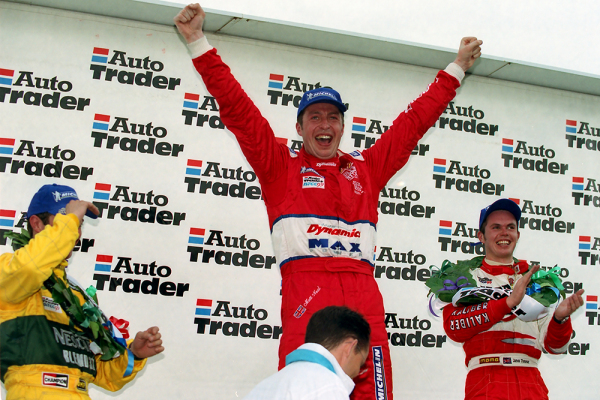