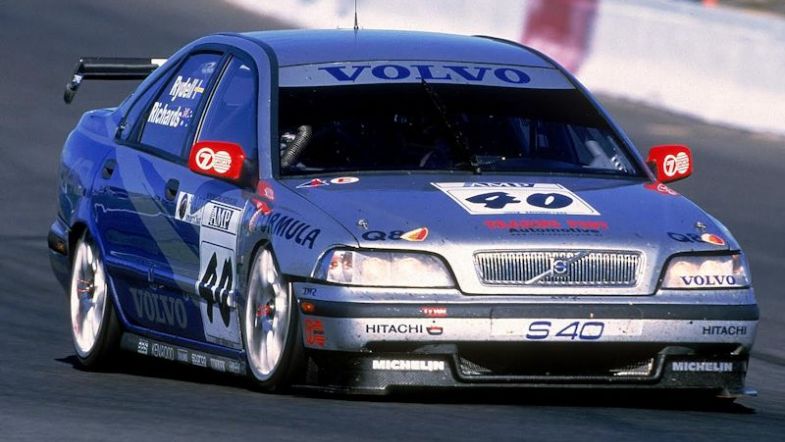 In the latest of our famous races series, we talk to 1998 British Touring Car champion Rickard Rydell about the year in which he won “The Great Race”, the AMP Bathurst 1000km in October 1998, the year of his BTCC title, sharing a Tom Walkinshaw Racing Volvo S40 with Jim Richards in the most famous touring car race in the world.

Rydell, whose career spans stints in the BTCC during its Super Touring heyday, the Scandinavian Touring Car Championship when it was at its prime just three years ago, as well as the World Touring Car Championship, which he returns to this season at the wheel of a Honda Civic, remembers his two drives at Mount Panorama most fondly, in particular his second run at Mount Panorama in 1998, where he won the race ahead of the Team Dynamics Nissan Primera of Steven Richards and Matt Neal.

“There are many races you think of when you look back, like when you win the championship it’s always great,” said Rydell to TouringCarTimes. “Even winning the Swedish championship in 2011 was a really great race for me, but I think it’s Bathurst 1998 which always comes to my mind for many different reasons.

“First of all, Bathurst is No.1 on my list of all tracks ever that I’ve driven on. I did a VLN race (in 2014) at the Nürburgring Nordschleife, and that is also a fantastic track, but if I had to put a list of my favourite tracks, Bathurst would come out on top.

“Just going there with a road car before the race and looking down from the top of the Dipper and looking back at the track it’s just amazing to think we’re going to race here. It’s everything between a street circuit and a normal circuit, with long straights, all different kinds of corners.”

Rydell had just won the BTCC in perhaps the most competitive season in the Super Touring era. While Alain Menu had won the championship the previous year in the Williams Renault Laguna, that car was considered the best car to have that year, and in the following year Laurent Aiello would run away with the championship in the RML-developed Nissan Primera. In 1998, the cars were much closer, with TWR’s Volvo S40 closely matched by the Nissan, and Prodrive’s Honda and the Lagunas of Jason Plato and Alain Menu.

Heading to the last Super Touring Bathurst 1000 however, with the V8 Supercars Championship in its infancy and hosting its own Bathurst 1000 race just over a month later, Rydell was optimistic of his chances.

“As it was for Super Touring cars and because I had won the BTCC I thought we had a really good chance there,” said Rydell.

“I was also racing with Jim Richards who is a legend in Australia and a really, really nice guy as well. In practice everything went well, and I remember qualifying particularly because of the one-lap shootout, and I was on pole by about 1.5 seconds, and I think it was one of my best ever qualifying laps, which went out with a Murray Walker commentary, so that was something special.”

While 1.5 seconds would cover the top 15 cars in the 2014 event’s qualifying session, the gap seemed pretty destructive after qualifying back in 1998, but fortunately for the viewers, a close race was still in prospect, as the Team Dynamics Nissan of Neal and Rydell’s team-mate’s son would prove to be a very real threat.

“In the race though, we weren’t that much faster,” he added. “All year I’d been competing against the Nissan, which was really quick, and near the end there was a safety car and the Nissan was just behind, but we managed to win the race just ahead of them. It was a long race and a good fight all throughout the race.”

During the final laps, Rydell was hounded by Neal’s Nissan Primera, with traffic playing a key role with the top BTCC-specification cars often coming across much slowers cars which managed to hold up both drivers. Rydell would cross the line after 161 laps, and 6 hours and 54 minutes of racing as the winner, just under two seconds clear of Neal’s Primera, with the Audi A4 of Brad Jones and Cameron McConville the only other car to finish on the same lap, and with just 18 cars classified of the 42 that started the race.

This was the last race for the Super Tourers at the Bathurst 1000, with the V8 Supercars Championship hosting the only Bathurst 1000 from 1999 onwards, and arguably the last time that BTCC and Australian drivers took part in the race on equal terms.

Nissan wouldn’t return to the Bathurst 1000 until they joined the V8 Supercars Championship in 2013, and Volvo made its return just last season, and in the early stages was a clear threat for the victory at Mount Panorama, with Scott McLaughlin and Alex Prémat in the #33 Volvo S60, until typical Bathurst dramas saw them in the wall with damage just a few laps from the end.

Rydell meanwhile returns to racing this year with the Swedish NIKA Racing team with a new challenge, driving a Honda Civic in the FIA World Touring Car Championship, while his close rival from the 1998 Bathurst 1000, Matt Neal, is set to continue with his family-run team, also competing with Honda in the British Touring Car Championship.

You can watch extended highlights of the 1998 AMP Bathurst 1000 below: