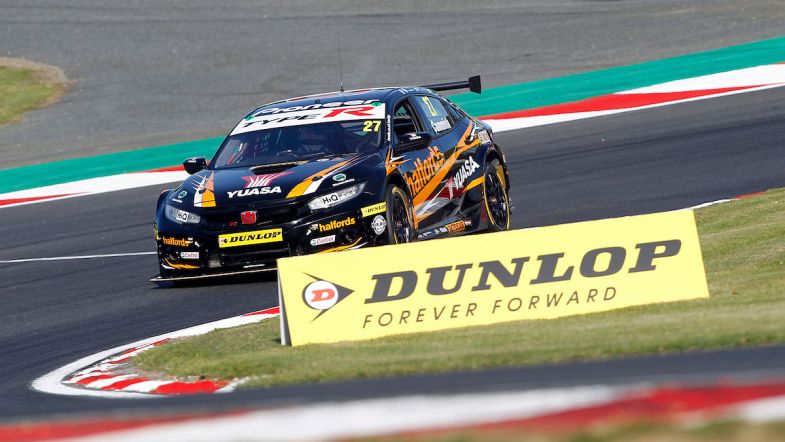 The new Jack Sears Trophy champion made the decisive move on Eurotech Racing’s Smith into Paddock Hill Bend on the second lap, having been glued to his bumper for the whole of the first tour.

However, the win is provisional at this stage, due to a post-race investigation into a possible false start. Cammish’s Honda Civic Type R appeared to be creeping on the grid, but stopped again before the lights went out.

Cammish becomes the 17th different winner of a record season and gave Team Dynamics an emotional first victory since the death of team member Mark Wain.

In the championship battle, it was advantage Colin Turkington, with the ballast-laden West Surrey Racing BMW 125i crossing the line in 12th, two places ahead of Speedworks Motorsport’s Tom Ingram. The gap between the pair is now 36 points with a maximum of 44 left to play for.

Motorbase Performance’s Tom Chilton had a solid run to ninth place and is now officially out of the running for the title.

Smith held his lead off the start ahead of Cammish, with team-mates Matt Neal and Jack Goff battling fiercely around the first lap. Goff passed Neal into Sheene while further back, Team Hard team-mates Ollie Pidgley and Bobby Thompson took each other out at Graham Hill Bend.

It was also a short encounter for Team BMR’s Ash Sutton, who went off at Druids and retired in the pits with front-end damage.

Neal re-passed Goff into Druids on lap four, before Ricky Collard, acting as a rear-gunner for Colin Turkington, engaged in a fierce battle with Ingram’s Toyota on lap five. After running side-by-side up Hawthorn Hill, Ingram eventually passed the BMW with a forceful move into Westfield.

Ahead of him, Turkington couldn’t make a move stick on Chilton despite a big look up the inside into Surtees on lap 10, while Tom Oliphant’s Ciceley Motorsport Mercedes A-Class stayed between the two title contenders to the flag.

Neal passed Smith at Druids on lap nine and closed to within 0.4 seconds of Cammish by the flag, while Smith staved off heavy pressure from tteneam-mate Goff to keep his place on the podium.