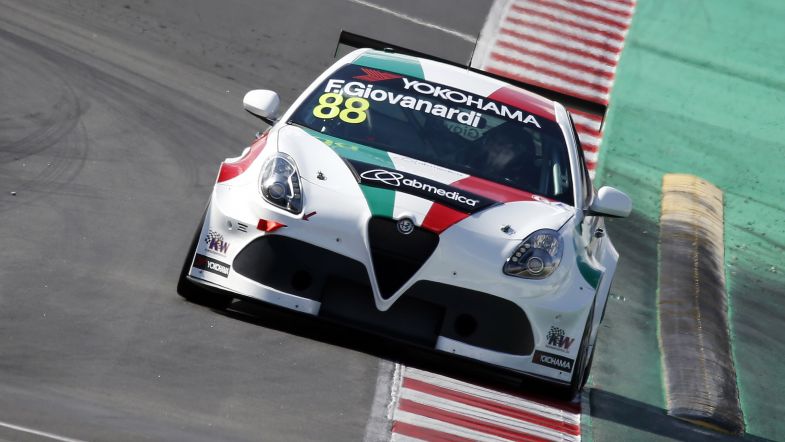 Track test: We get behind the wheel of the Alfa Romeo Giulietta TCR

Join TouringCarTimes journalist Pietro Casillo as he gets a first-hand experience of the Romeo Ferraris-built Alfa Romeo Giulietta TCR in a test at the Italian circuit Cervesina.

As is the case with many of the TouringCarTimes readers, I suspect, my dream was always to become a professional racing driver and drive beautiful cars all around the world.

I was never able to put enough budget together to go racing until 2017, when I became Italian champion in a Renault Twingo one-make series in Italy. Not quite what my dream was, but I still feel lucky I was able to race and win.

Imagine my delight when I got a call from the Romeo Ferraris team, asking me whether I would like to test their TCR car. I didn’t even have to reply, just pack the racing gear and go!

Although I was very lucky to get the opportunity to test WTCR machinery, the weather was not on my side, as light rain was still falling on the damp tarmac when I arrived. I had never seen the track, nor had I ever taken a seat in the car for that matter, despite spending so many years watching them trackside.

I know most of the Romeo Ferraris staff, so it was nice to see them again, and WTCR race-winner Kevin Ceccon was also there for advice, which was good help for a start. 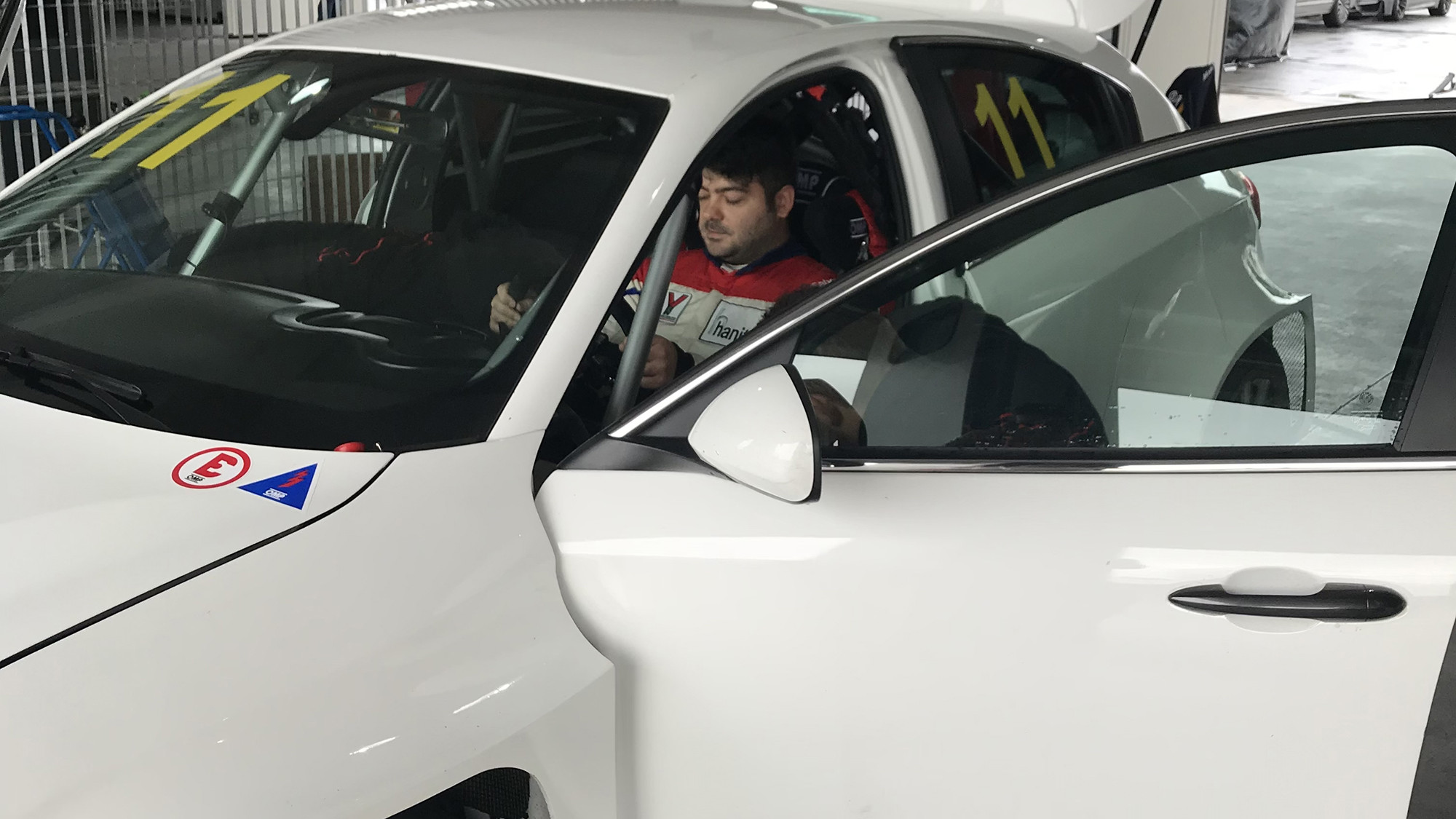 Mario Ferraris, owner of the team, was going to take care of me as I headed for two four-lap runs. The first thing he told me was ‘please do not crash the car’, to which I fully agreed. I wasn’t there to show off and set the best possible lap time, I was going to enjoy the moment and try to convey the feelings to you.

Mario explained the basics of the car that took a few minutes as the mechanics accommodated my “generously sized” body into the car. Height was not a problem as, unlike in road cars, it is the pedals that are adjusted to fit the driver, and not the seat, as long as you’re comfortable reaching the steering wheel.

I was told how to use the dashboard, which gives loads of useful information and, more importantly, shows alarms in case something goes wrong in the engine or the gearbox. I was told that if the screen turned yellow I’d have to go back to the pits safely and if it turned red I should just stop the car on track and, obviously, swear as much as I wanted to.

Luckily that was not to be, although I did have one problem. These racing clutches need to be operated very carefully and I wasn’t used to that at all. So, as you may guess, I stalled it on my first try. Not just once, I just couldn’t set off.

Mario kindly explained to me how to move the car, but my confidence was shredded to bits, as I had gotten into the car as an Italian champion and, mind you, I had made a fool of myself before even turning the wheels.

At that point I realised that I had to approach it as a beginner would. Not that I had an awful lot of experience, but I thought having done a full championship and some other races would come in handy. Well, no. 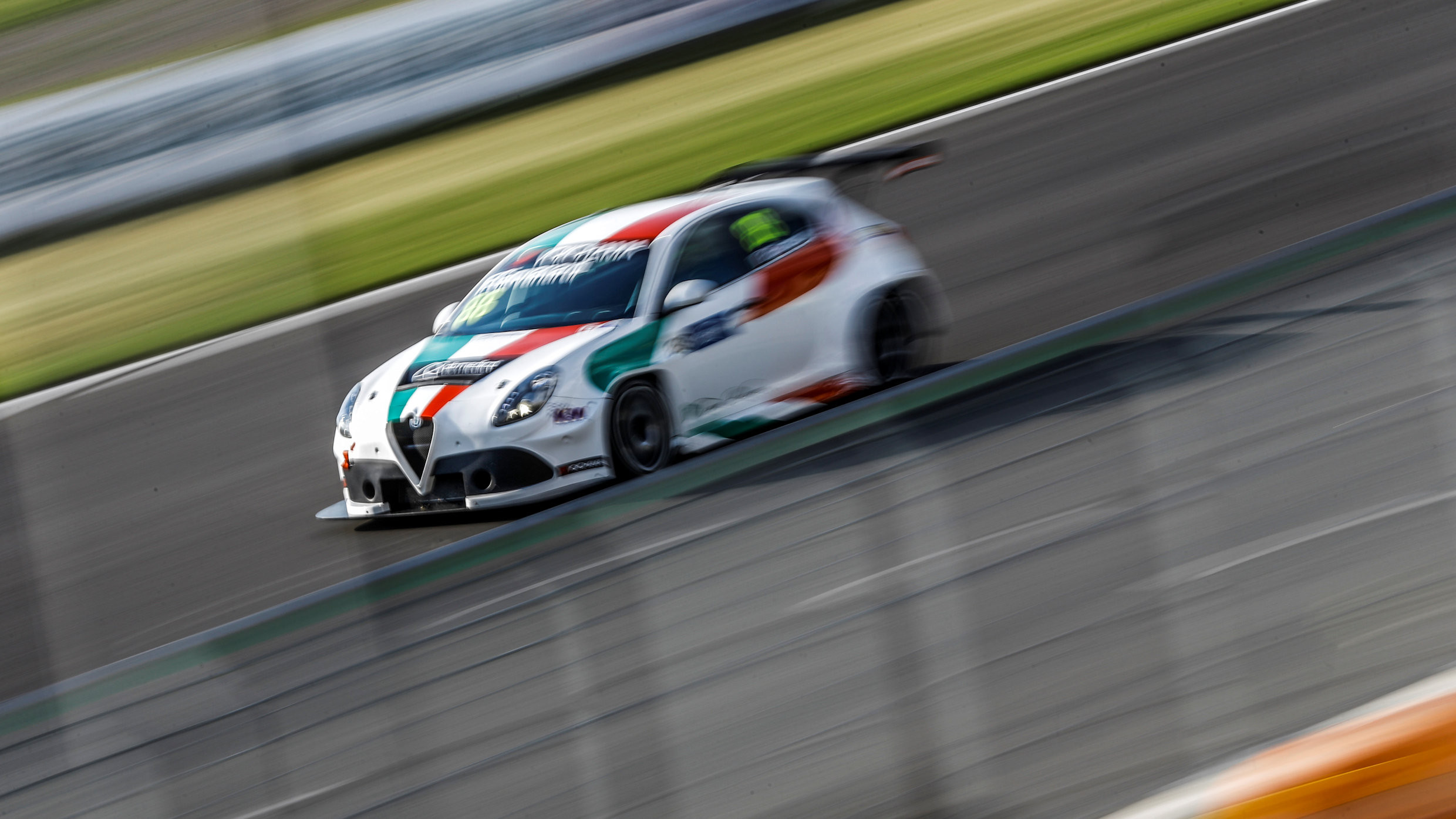 I should explain at this point that my previous racing car had no more than 85hp and it featured a classic H-pattern five-speed gearbox, although I never used that fifth gear in a year and a half of racing. You can only imagine the shock I felt when I finally got started and, with little more than 20% of throttle, I could feel the engine wanting to unleash that 340hp straight away. Which I didn’t do because I was scared stiff!

The track was damp, so I thought I’d take it easy for at least a couple of laps, as I also needed to at least understand where the track was going, as I didn’t know it at all. I had been told which gear to use for each corner, but there was so much feelings that I obviously forgot everything by the time I came to the first corner of the first lap.

I was trying to take it easy, but due to the way the car is built and the nature of the race specification sequential gearbox, you really don’t want to turn into a corner with your foot completely off the throttle, as the car will start jump all over the place as if it was stalling. That is normal in a racing car, but it’s not easy to understand that the safest thing to do is going fast!

That is also the reason why on the second lap, when I was hoping to push a tiny bit more, the brakes gave me the middle finger at Turn 2 and I risked an impressive and heartbreaking off. The brakes were obviously not in the temperature range they work at, so again, my inexperience with proper racing material kicked in again. 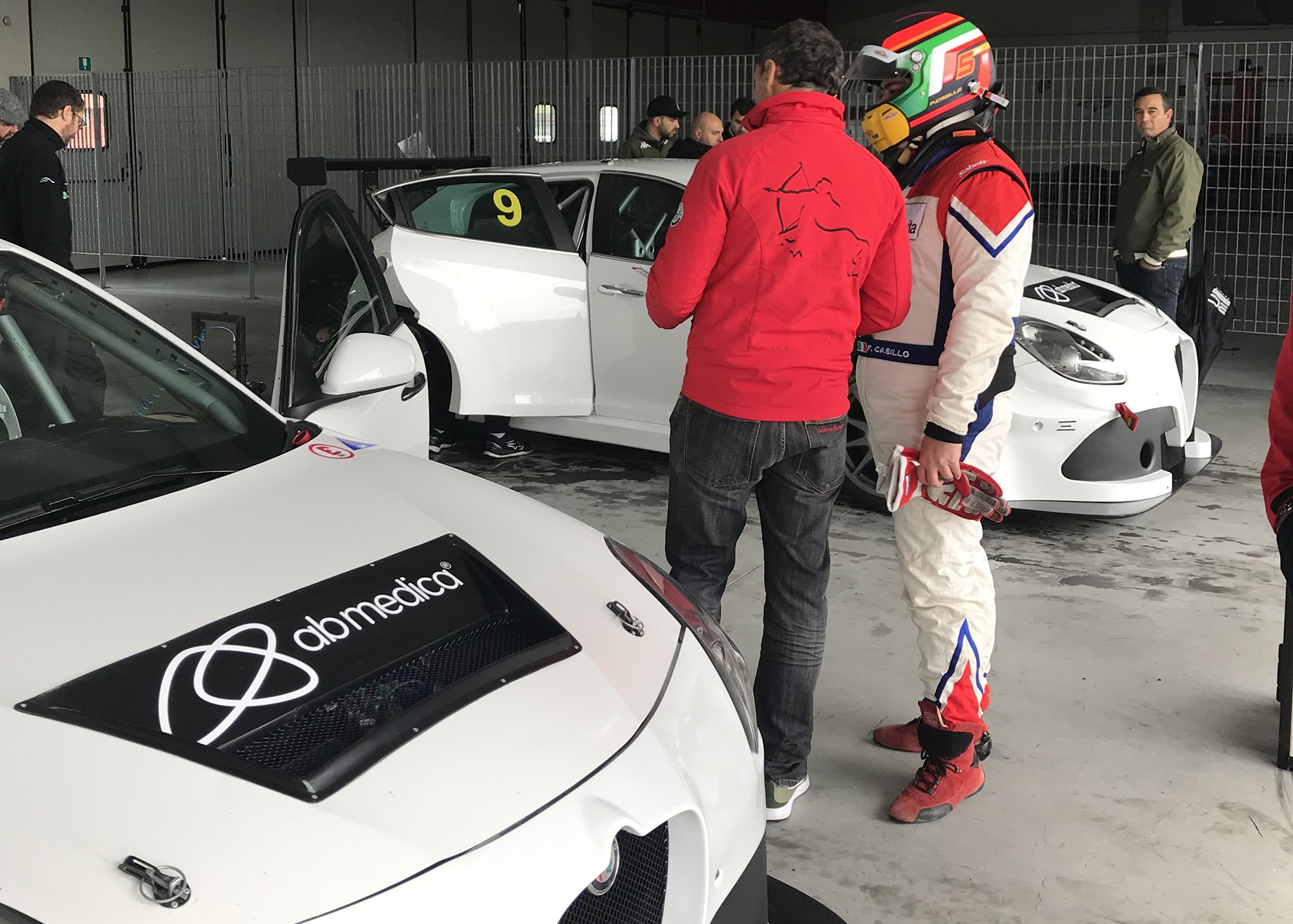 Anyhow, I had to pick up my courage and start pushing a little bit more as the test progressed. Despite the low-grip conditions, I was impressed the sheer power of that 1,750cc turbocharged engine. I was actually shocked by the acceleration and the forces it puts on the driver’s body on a damp track. That engine just glues you to your seat.

The engine of the Alfa Romeo is smaller compared to the other 2-litre turbos of the TCR. The engine mapping takes care of the difference in capacity to make sure the Giulietta is on level power with its competitors. The result is impressive. The torque delivery is brutal, which is not easy to master on a damp track. In fact, you have to very gentle unless you want disastrous wheel spin through the gears.

Ceccon explained to me that with the tyres in the proper temperature range, wheel spin doesn’t happen that often, but you still need to be gentle on the throttle out of the corners.

The handling of the car is also impressive. I thought it would be all over the place with all that power through the front wheels, but that wasn’t the case.

The Giulietta is easy to drive, at least as long as you drive it like I did. I wish I could tell you what it’s like to drive it on the limit, but for as much as I would have loved to tell you the tale, I just didn’t want to risk it. 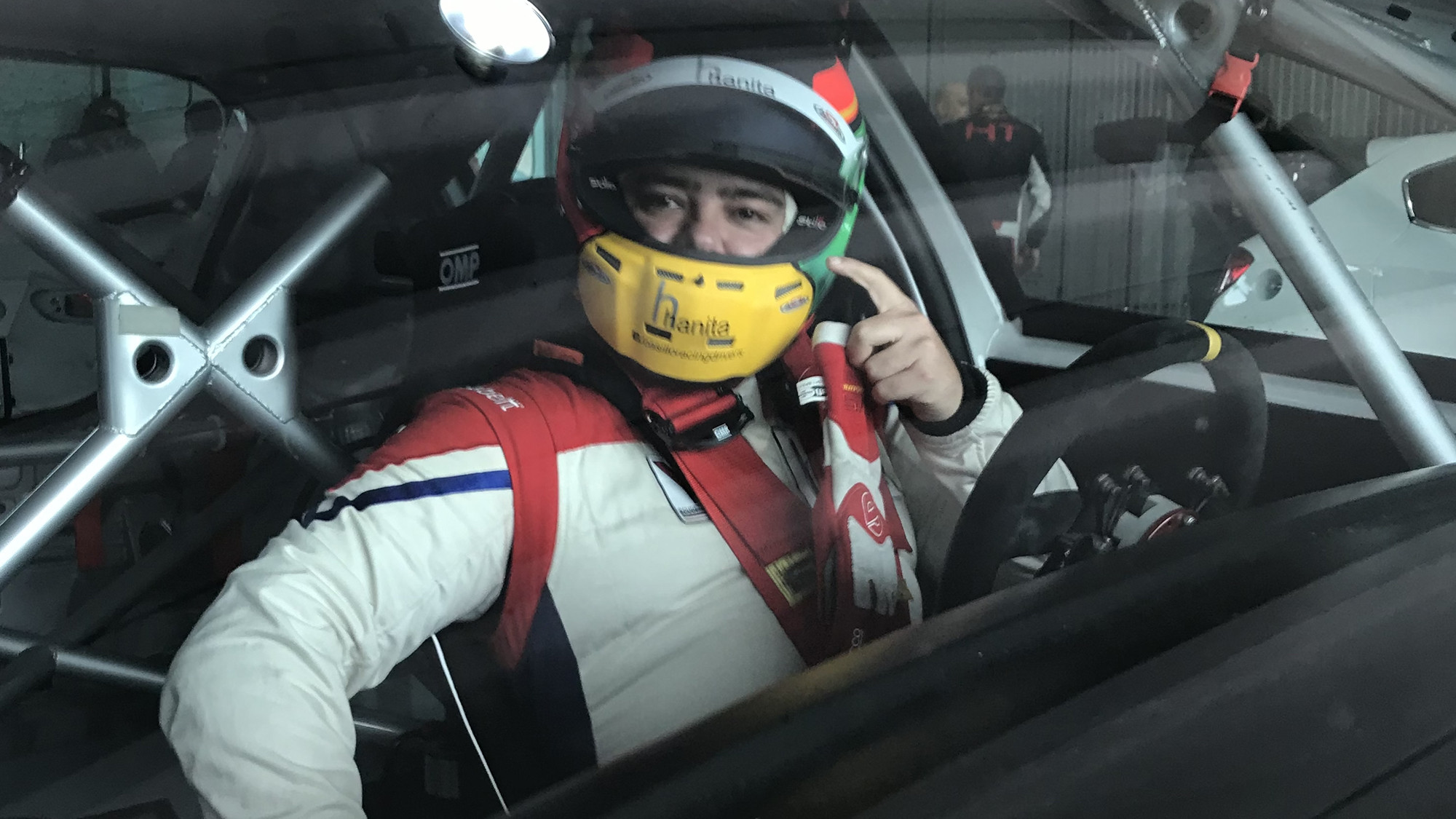 By the time I reached the end of the second stint, the temperatures had finally come up to something much closer to what it should be like. I had also gotten to grips with the paddle-shift sequential gearbox, which changes gear with a tremendous speed and feels very natural, despite it not being a gear stick that feels more “mechanical”.

And my lap times – which I could see on the dashboard but I won’t disclose because, well, they were too impressive (hehe) – came down by some 16 seconds in the end.

The test of the Alfa Romeo Giulietta TCR was a wonderful experience, and I can’t thank Romeo Ferraris enough to let me drive one of their cars. Ceccon also took the time to give me some advice between the two runs, which was precious and hugely contributed to that 16-second improvement.

The car is beautifully crafted and feels like a proper racing. I wish I had time and insurance coverage to push it to the limit, but I guess this will be the topic of the next feature?

An ordinary man, with racing experience limited to basically a road car turned into cup racing material, I was mind-blown by the beauty of the TCR machinery. I hope this brought you a bit closer at least to what it would feel like to drive one of these fantastic beasts.

Don’t miss the video from my, very careful, first laps: