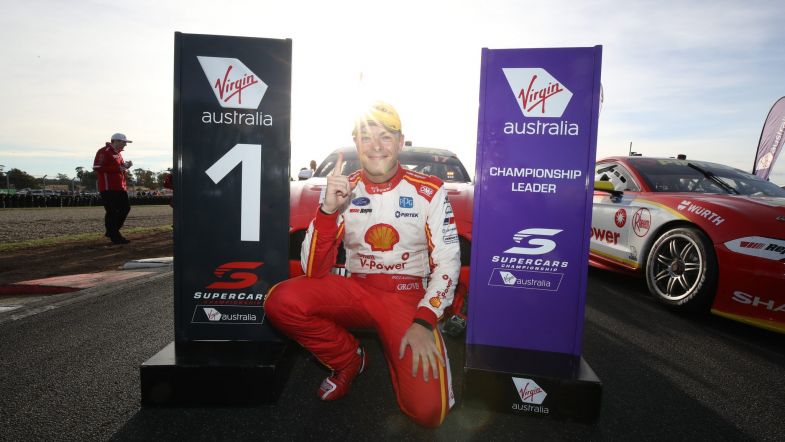 All the talk of parity and centre-of-gravity changes has failed to stop the march of DJR Team Penske in the Supercars Championship, Scott McLaughlin leading teammate Fabian Coulthard to a crushing Mustang 1-2 in Race 7 of the season at Symmons Plains.

The reigning champion beat polesitter Mark Winterbottom into the first corner and subsequently dominated the race, even a slow pit stop and the ‘man flu’ failing to slow what was a complete performance from the No. 17 Mustang and its Kiwi driver.

He edged out teammate Coulthard by 1.7 seconds to take his championship lead to 135 points after just seven races of the season. Shane van Gisbergen finished third to salvage something from an otherwise character building day for the factory Holden squad.

Coulthard started fourth, however passed David Reynolds early and then jumped Winterbottom in the pit stop sequence to climb to second, shading his teammate to the finish in the second 1-2 for the team this year.

Van Gisbergen’s third place came after opting for an alternate strategy to a majority of the field: stopping later and storming home on fresher tyres to ultimately denying polesitter Mark Winterbottom a podium finish two laps from the flag.

Six Commodores and Mostert’s Mustang trailed the dominant DJR Team Penske Mustangs. The race was all about McLaughlin who converted second on the grid to an early lead that never really saw him threatened.

His advantage was clear from the outset when he beat pole sitter Winterbottom into turn one and two and immediately established a margin over his Holden-driving rival.

Coulthard, meanwhile, passed Reynolds on lap three with a big move around the outside of turn five to move to third, while a slow start saw van Gisbergen fifth in the early running.

The race settled down before Reynolds was the first of the leaders to stop when he pitted from fourth on lap 18 while Coulthard stopped for four tyres a lap later.

Winterbottom stopped on the 20th lap, though a slow stop for four tyres and fuel saw the blue Commodore lose track position to Coulthard, dropping to a net third position when the field settled.

Leader McLaughlin’s straightforward if slightly slow stop a lap later saw him retain track position over his teammate and Winterbottom as the order settled, the Shell Ford never headed from there.

Van Gisbergen was the last in the field to stop, waiting until the end of the 29th lap and emerging behind both James Courtney and David Reynolds in sixth place – Courtney the big winner of the pit stop sequence in his Mega Racing Commodore.

On fresher tyres, van Gisbergen slipped past Reynolds at turn six on lap 34 and then promptly hunted down Courtney, easily accounting for the former champion on the lap 40 with a pass at turn five.

He then set out about chasing Winterbottom and reduced a four-second margin to nothing by the penultimate lap.
Hindered by the lapped Brad Jones Racing Commodore of Jack Smith, Winterbottom found himself defending heavily into turn four, van Gisbergen’s better drive out of the iconic hairpin ultimately helping him past by the time the pair reached the end of the back straight that same lap.

That pass denied the Charlie Schwerkolt-run team their first Supercars podium, Winterbottom forced to settle for fourth behind McLaughlin, Coulthard and van Gisbergen.

The other big story of the day centred on Jamie Whincup, who entered the race second in the championship.

Forced to work his way through the field following his earlier qualifying miscue, the former champion’s race unravelled on the second lap when he made contact with the rear corner of Chaz Mostert’s Mustang at turn six – damaging the right front wheel and tyre on his Red Bull Commodore.

He lost two laps in pit lane and finished last, dropping two spots and a substantial haul of points in the championship.

With McLaughlin enhancing his now substantial series lead, Mostert moves to second in the standings and Coulthard to third, while Whincup’s terrible day drops him to fourth.

A consistent Tim Slade sits fifth in the championship, David Reynolds, Will Davison, Shane van Gisbergen, Mark Winterbottom and Nick Percat completing the top-10 ahead of Race 8 on Sunday.

The longer Sunday race will be contested over 200km with two stops and varied strategies likely to be the order of the day.