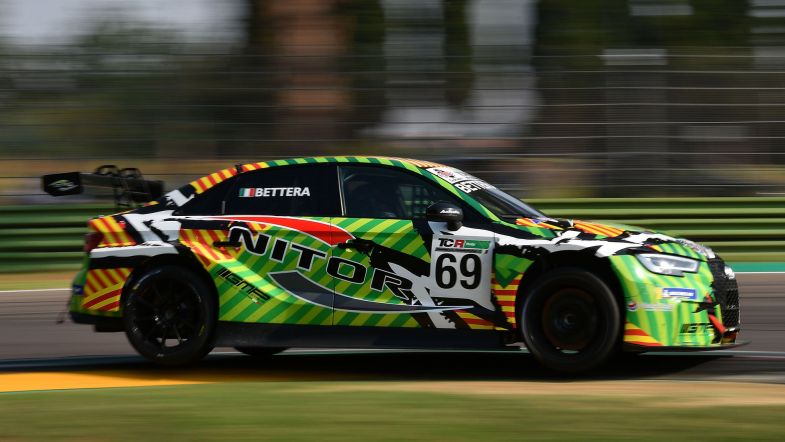 Enrico Bettera managed to stay out of trouble to take his Audi RS 3 LMS to its second victory of the season at Imola in a race plagued by on-track fighting incidents.

At the start, Bettera made the most of pole position to take the lead ahead of Cupra pair Matteo Greco and Igor Stefanovski, with Jacopo Guidetti’s Audi RS 3 LMS slotting into fourth.

However Guidetti hit trouble as he went straight on at Tamburello, losing several positions after returning to the track just behind Scuderia del Girasole’s Salvatore Tavano and Team Wimmer Werk’s Felix Wimmer.

Luca Segú, sharing a Honda Civic Type R FK8 TCR for Race Republic with Stefano Comini this weekend, then stopped at the Variante Alta, with the safety car called into action for two laps whilst the Italian’s car was recovered.

At the restart Stefanovski attacked Greco but then went straight at the Tamburello. Tavano managed to get ahead of the Macedonian, who came under fire from Target Competition’s Marco Pellegrini.

Pellegrini attacked Stefanovski on the following lap, taking third place at Villeneuve, as Bettera and Tavano opened a gap.

Stefanovski didn’t give up on a podium finish, coming back to Pellegrini and frustratingly flashing his headlights at the Italian driver. However, Greco closed back in on Stefanovski, forcing the Macedonian to defend, as both came under Wimmer’s close watch.

Greco overtook at Villeneuve, but tangled with Stefanovski, running wide and losing several positions as Wimmer overtook both. Stefanovski recovered the position Eric Scalvini then attacked the Austrian.

The hostilities wouldn’t end there, as Pellegrini went out at the Tamburello on the penultimate lap as his right front tyre came loose, with the Target Competition driver going straight and retiring in the gravel trap.

At the chequered flag, Bettera achieved his second victory of the season, followed by Tavano and Stefanovski on the podium.

Wimmer managed to stay ahead of the Cupras of Greco and Scalvini, with Matteo Bergonzini taking seventh place.

Team Wimmer Werk’s Gunter Benninger recovered from this morning’s qualifying problems to take his Cupra TCR to eighth place, ahead of team-mate Christian Voithofer. The fourth driver from the team, Peter Gross, completed the top ten.