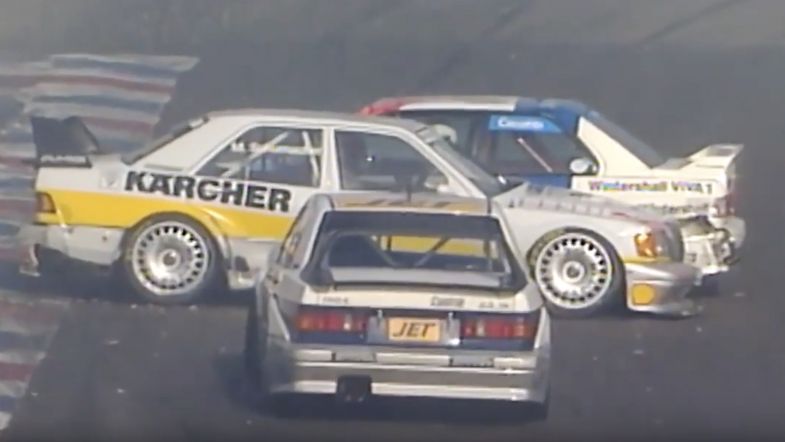 As we prepare for the 2020 racing season, join us to look back at ten of the most controversial clashes in touring car racing from the past four decades.

Three-time WTCC champion José María López and Agustín Canapino were fighting for the 2013 Top Race V6 title when López made a controversial move for position – with the subsequent contact seeing him go on to claim the title. However, as López rushed to the airport to head to France for the Citroën WTCC launch the following day, he was disqualified, and the title went to Canapino instead.

Thed Björk was heading for his first victory of the season in the penultimate Swedish Touring Car Championship round of 2009 when Volvo driver Robert Dahlgren, who was team-mate to Björk’s title rival Tommy Rustad, made contact with him on the penultimate lap. The incident resulted in Dahlgren being hit with a ten point penalty – a rare punishment in the series. Data revealed that the Volvo driver braked 27 metres later than he had during the previous lap.

The second Brands Hatch round of the 2003 BTCC season saw a heated confrontation in the parc ferme between Yvan Muller and Anthony Reid. The MG driver launched a late attack on the Vauxhall driver at Druids, resulting in Muller getting a licence suspension and Reid getting his helmet shaken around (more of that to come…).

Five years earlier, Anthony Reid was involved in a similar controversial move into Druids at Brands Hatch. This time it was with then title rival Rickard Rydell of TWR Volvo. The incident resulted in Reid being stripped of his win and getting his helmet shaken around in parc ferme, as he would five years later.

Volvo driver Jan “Flash” Nilsson and Audi driver Roberto Colciago were the main title contenders for the 2001 STCC title, and the two came together spectacularly at Gelleråsen, with Colciago taking out the Volvo driver. The duo met in the pit lane after the race in a slightly comical way.

Seven-time F1 world champion Michael Schumacher made an infamous one-off appearance in the season finale of the 1990 DTM season. The Mercedes driver drove over the grass at the first corner to take out BMW driver and title contender Johnny Cecotto. The incident saw Cecotto knocked out of title contention, as Audi driver Hans-Joachim Stuck lifted the crown.

More DTM controversy, this time 25 years later with the infamous radio communication from Dr. Wolfgang Ullrich, then Head of Audi Sport,: “schieb ihn raus” (push him out). Audi driver Timo Scheider went on to take out both Mercedes drivers Robert Wickens and Pascal Wehrlein. Scheider was excluded, Audi was stripped of their points in the race and handed a 200,000€ fine, with Ullrich being banned from the DTM pits.

V8 Supercars legends Mark Skaife and Russell Ingall came together in spectacular fashion during the 2003 season finale at Eastern Creek. Skaife ended up in the wall and headed out to the track to show his displeasure with the Ford driver who responded by turning his car towards the angry Holden rival. Skaife was fined 10,000 AUD and Ingall 15,000 AUD for the incident.

One of the most controversial finishes to a championship came in the 1999 season finale of the STW Cup at the Nürburgring. Audi driver Christian Abt and Opel driver Uwe Alzen fought furiously for the title, culminating on the last corner of the last lap. Abt was hit by Alzen’s manufacturer colleague Roland Asch, who had been black flagged for an earlier incident, with Alzen crossing the line to claim the title. But the German Motor Sport Federation later changed the result back to one lap before the incident, handing the title to Abt.

It is impossible to complete a list of the most controversial touring car clashes without the 1992 BTCC season finale at Silverstone. Vauxhall driver John Cleland was fighting BMW driver Tim Harvey for the title, with Harvey’s BMW team-mate Steve Soper getting involved. Cleland was passed by both and when he passed Soper back (on two wheels), Soper responded by driving over the grass to take the Vauxhall driver out, handing the title to Harvey.

The race has it all, classic commentary from Murray Walker, ultra-close racing and plenty of title-deciding controversy. A well-deserved number one.