A journey back in time to the 1997 RAC Tourist Trophy

The RAC Tourist Trophy is the oldest continuous motor race having first been held in 1905, and the 1997 edition saw it run for Super Touring cars at Donington Park.

The race attracted 21 entries, mainly from the British Touring Car Championship, but also from the German and Swedish equivalents – all racing for a prize pot of 25,000 GBP.

Touring car legend Alain Menu had won the race in 1996 and had his sights firmly set on a repeat victory in 1997 after a dominant BTCC season with Williams Renault, and was joined by team-mate Jason Plato.

But he was facing stiff opposition from not only Volvo and Nissan, but also Audi as it bid farewell to the four-wheel drive version of its A4.

The German manufacturer had no less than five Audis on the grid as BTCC regulars Frank Biela and John Bintcliffe in their Audi Sport UK-entered cars were joined by the semi-independent German team Abt Sportline entering Christian Abt and Kris Nissen in two bright-yellow Quattros.

The most notable Audi entry was the front-wheel drive A4 of Yvan Muller. The Frenchman had raced full season with the new version of the A4 in the German STW Cup, finishing seventh overall, and would provide the German manufacturer with an interesting comparison between the drivetrains. Honda meanwhile had none of its regular drivers there, with newly crowned F3 UK champion Jonny Kane being joined by World Superbike front-runner Aaron Slight.

Ford had both of its BTCC regulars entered for the race in the shape of Paul Radisich and Will Hoy whilst Vauxhall had just one factory-supported entry in the form of the flying scotsman John Cleland, who ran a Vectra with a new engine and aero kit. Vauxhall was represented by a further three independent entries, with Swedish and Norwegian racers Jan Brunstedt and Tord Linnerud being joined by Tim Sugden – who drove an older Cavalier for Mint Motorsport as a last-minute replacement for Ian Heward, who was originally entered by the team.

Brunstedt was supposed to be joined by STCC team-mate Thomas Johansson, but he had to sit out the race as the Vectra he was supposed to drive had been delayed in its transport from the Bathurst 1000 race in Australia. There were two independent entries from Team Dynamics, with Matt Neal racing a Ford Mondeo and STCC regular Kari Mäkinen in a Nissan Primera.

There were other notable entries on the list that never made it to the race, with Jamie Spence entered in a Toyota Corolla by RouseSport that failed to make it to the grid.

Three-time BTCC champion Andy Rouse had built the Toyota in Super Touring specification in an attempt to lure back the Japanese manufacturer to the BTCC; a project that unfortunately never materialised. 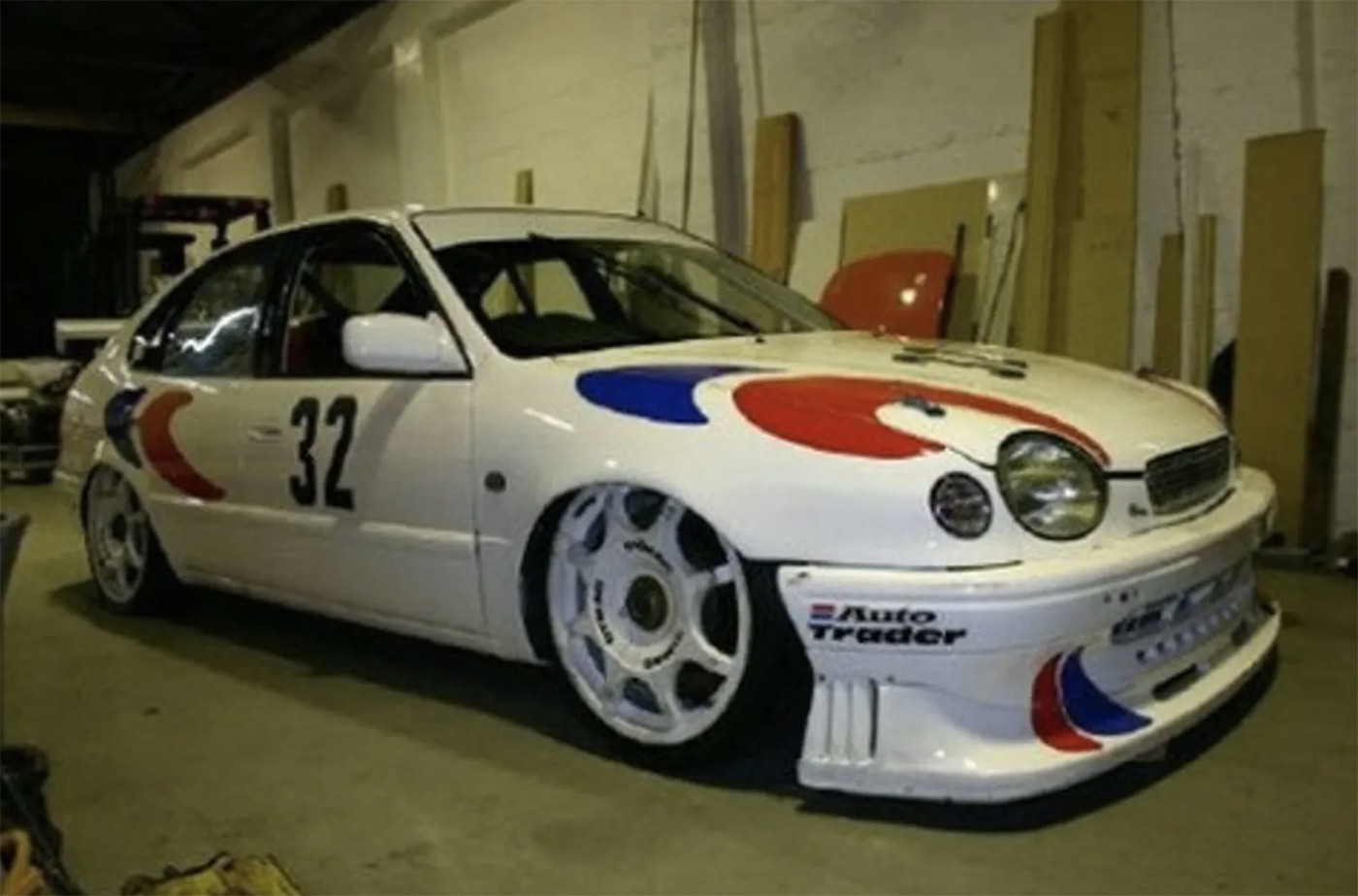 Peugeot had entered its BTCC duo of Tim Harvey and Patrick Watts, but did not show up for the race, despite a competitive showing in the Bathurst 1000 race a couple of weeks earlier.

The race weekend was drastically changed from 1996 when it had an endurance format of 80 laps and mandatory pit stops without driver changes. The 1997 format featured a single qualifying session that was followed by two qualifying races and a longer final race.

The second qualifying race used a reversed grid system, reversing the result from qualifying, a format that saw several drivers opting for a special strategy.

Menu and Leslie opted to go as slow as possible, without breaking the 110% qualifying maximun, in order to secure the reversed grid pole position for the second race, claiming positions one and two respectively on the grid.

F3 star Kane impressed in his first Super Touring outing by putting his Honda Accord in fifth position on the grid behind 1996 BTCC champion Biela. Plato was a close second for Renault, with Rydell in third and Menu charging from last place on the grid to finish fourth.

World Superbike star Slight was an early victim, spinning off hard into the barriers after receiving a nudge from Audi driver Muller. The Honda driver was uninjured but the team could not repair his Accord, forcing him out from the remainder of the weekend. 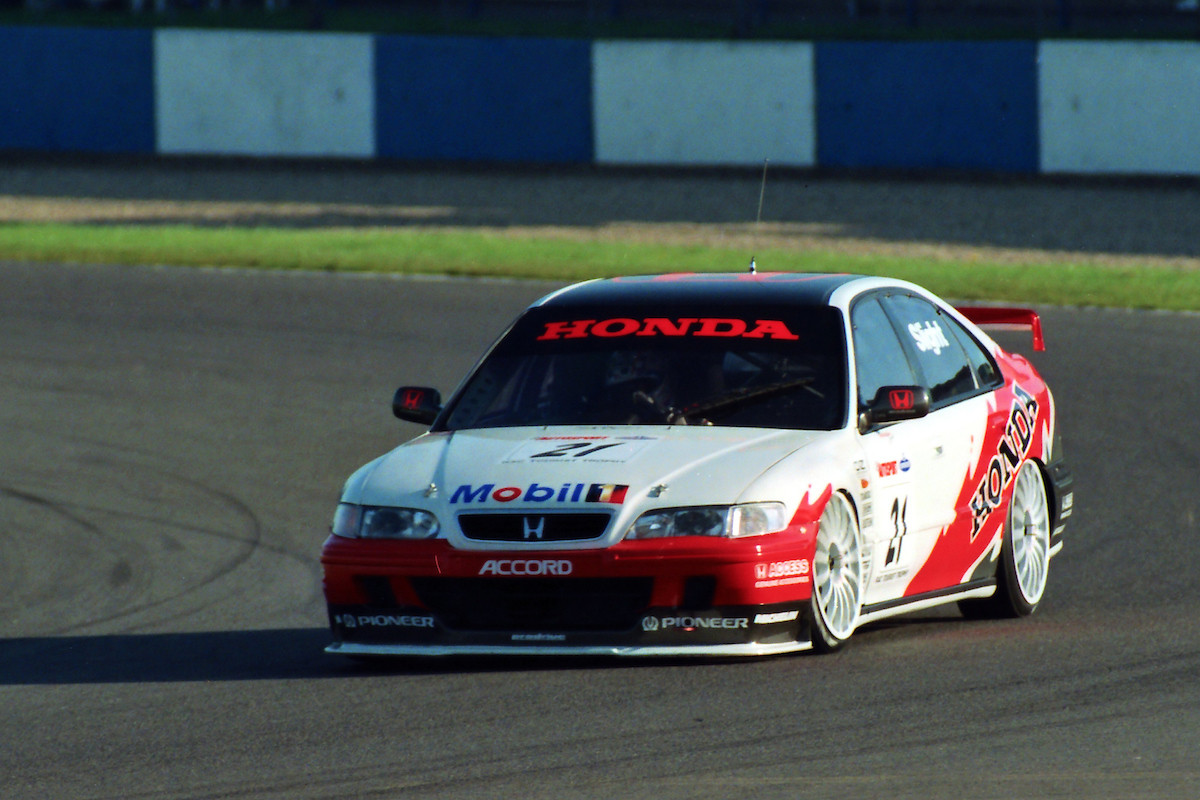 The second race saw Menu disappearing into the lead as soon as the lights went to green, with Leslie a distant second and Hoy third ahead of Muller.

There was plenty of action in the second race, most notably a five-car fight between Nissen, Hahne, Biela, Rydell and Plato.

Hahne went into the side of Nissen coming into the final chicane, resulting in a half-spin for the Abt Audi driver.

The five drivers kept at it until Starkeys Bridge where Hahne and Plato made contact, allowing Volvo driver Rydell to sneak past all four drivers up into fifth position.

Reid, who won the first race, charged from the back of the grid to sixth position after being hit on the opening lap.

The grid for the final race was determined by adding the finishing positions of the two qualifying races, with pole position awarded to the driver with the lowest number.

Menu started from pole ahead of Rydell, Leslie, Biela, Muller and Hoy.

Nissan driver Leslie made a strong start from second position on the grid and challenged the Williams driver through the first series of corners, making contact through the fearsome Craner Curves. But Menu managed to stay ahead and Leslie had to focus on defending from Plato instead, who had made a very strong start from seventh on the grid.

Rydell, who started second, had made a dreadful start after creeping just before the lights went to green and dropped back to fifth place.

A three-car Audi fight developed behind the leading quartet between the four-wheel drive BTCC regulars Bintcliffe and Biela and the front-wheel driven Audi of Muller.

Bintcliffe got ahead of both of his Audi team-mates in the first part of the race but soon dropped back, leaving Muller to chase Biela until the chequered flag.

The fight for second place went on throughout the race as well, culminating on the very last lap when Plato made a late dive on Leslie at McLeans, resulting in the Nissan driver spinning off into the gravel.

Plato escaped a penalty, making it a Renault 1-2 as Menu secured a dominant second victory of the day to claim the 1997 Tourist Trophy honours. Rydell inherited the final podium position thanks to the incident, with Biela sending off the Quattro model in fourth, beating FWD team-mate Muller who finished fifth.

Reid was unable to make ground and finished sixth ahead of Ford driver Hoy and German Volvo driver Hahne. Bintcliffe dropped down to finish ninth ahead of the top privateer Audi in the form of Danish racer Nissen.

1997 was the last year for touring cars to be featured in the Tourist Trophy as it switched to the International Sports Racing Series for the 1998 race.