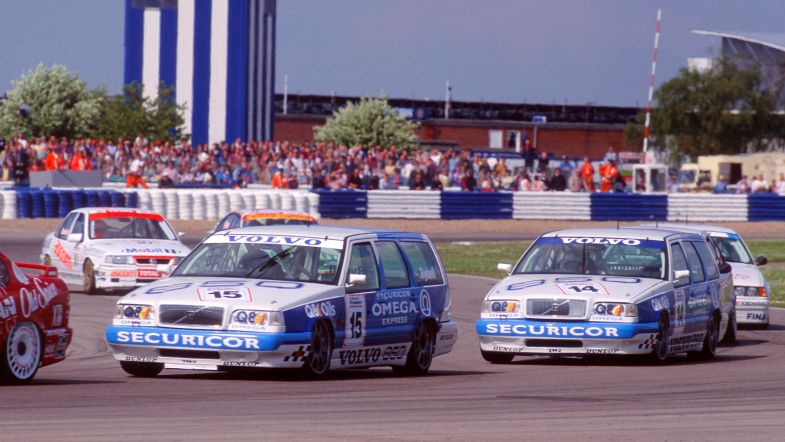 Sometimes a new racing car is launched and when you see it hit the track for the first time, it just looks right; like it was designed with the end goal of being a successful racer.

Then, at the other end of the scale, there are cars that come along and leave you to wonder if what you’re seeing in front of you is the result of someone not really taking things seriously…

With that in mind, and given the current downtime in the racing world, we thought we’d collate a few racing programmes from the not too distant past that either surprised when they came to fruition, or that promised more than they would ultimately deliver… Kicking things off is one of the most iconic vehicles of the British Touring Car Championship’s Super Touring era – even if it’s a car that is far from being the most successful.

When Volvo elected to enter the BTCC in 1994, it sprung a huge surprise when Tom Walkinshaw Racing – the team entrusted with the programme – rolled up with a pair of 850 Estates, having managed to keep the plans to run the car largely under wraps.

Famously, lead driver Rickard Rydell wasn’t even aware he’d be racing an estate car when he signed up to the programme…

Compared to the cars that are seen on track today, the 850 Estate appeared to be far from the most aerodynamic machine – although it was actually slightly more aerodynamic that the saloon variant, which would eventually come in to replace it.

One thing the car did have however was a major USP as the only estate on the grid, which ensured that Volvo would garner plenty of attention across the season.

With only limited testing, the team faced an uphill struggle to fight towards the front of the grid, although Rydell did manage to qualify third at Snetterton and picked up top six finishes at both Oulton Park and Knockhill.

Come the following season, TWR switched to the 850 saloon which would soon be winning races with both Rydell and new team-mate Tim Harvey and Volvo would ultimately lift the title with Rydell in the S40 in 1998. However, is it the 850 Estate that would become an unlikely pin-up for a golden era of touring car racing. 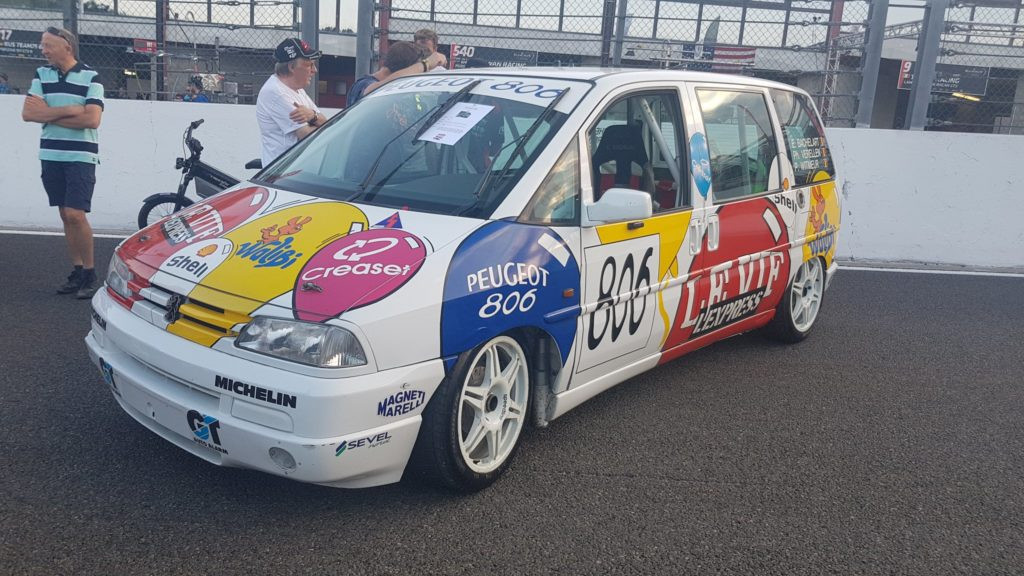 If the 850 Estate was an unlikely race car, then it’s hard to find words to describe the car that Kronos Racing – a team that would later go on to win the WRC title – elected to use for an entry into the 1995 Spa 24 Hours.

Back then, the race was held for touring cars across four classes headed by Super Touring, with the BMW of Peter Kox, Steve Soper and Jo Winkelhock ultimately emerging victorious by a margin of nine laps.

Elsewhere there were some more unusual cars on the entry – including a Citroen ZX, Peugeot 306 diesel and a Suzuki Baleno – but it was the Kronos car in the Procar class that arguably raised the most eyebrows.

Peugeot Belgique had been keen to try something different in the race, so Kronos got to work on a racing version of the 806 people carrier; a car that couldn’t have been much further from the definition of sporty.

Built on the underpinnings of a Peugeot 405 and with an engine comprising of the block from a Group A rally car and the cylinder head from a Super Touring car, the 806 was allowed into the race despite concerns from some other teams, and duly qualified an impressive third in class and twelfth overall.

Whilst engine issues would ultimately prevent drivers Philip Verellen, Pascal Witmeur and Eric Bachelart from making it to the finish, the 806 went down in history as one of the more unusual cars to compete in the Spa classic. Five of the last ten BTCC titles have been won by drivers at the wheel of a Honda Civic so you might be asking yourself why the car is appearing on this list.

That’s because not every racing variant of the Civic has been that successful, as was the case in 2004 when two Super 2000 versions of the EP3 Type R appeared on the grid. It was the car entered by Mardi Gras Motorsport that would garner a number of headlines before the season started, and whilst it ultimately didn’t set the world alight on track, it would prove to be something of a trailblazer.

Mardi Gras had previously run Roger Moen and Mark Lemmer in the Super Touring era, and returned to the grid in the first year of S2000 machinery with a Civic that had previously raced in Europe.

A lack of pre-season running meant that the team was on the back foot from the moment the car appeared in public for the first time during the season launch at Donington, where driver John George propped up the times with a lap 6.5 seconds off the pace.

Things wouldn’t get any easier in the opening three rounds and having qualified ten seconds off the pace at Silverstone – and been lapped in every race it completed – the team elected to park the Civic, which was hampered by the fact it was around 100kg heavier than the minimum weight. George would return later in the year with a Peugeot 406 Coupe, again powered by gas, and was able to race with the pack, even if he didn’t trouble the scorers.

Whilst the Civic wouldn’t deliver the results the team had hoped for, it showed that alternative fuels were an option in touring car racing, with SEAT going on to run diesel power with huge success in both the WTCC and BTCC, and Arena Motorsport winning races and the Independents’ title when it brought gas back to the British series in 2010. 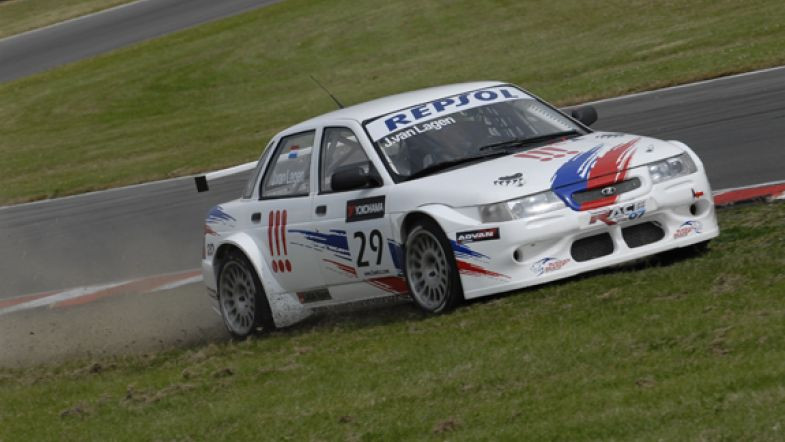 Russian manufacturer Lada has long been the butt of jokes thanks to infamous cars like the Riva and the Samara, so there was plenty of surprise when news surfaced of a move into the World Touring Car Championship with the MTEC Sport team back in 2005.

“Our objective is to improve our brand image,” Vitaly Vilchik, the president general director of Avtovaz, said at the time – although there would be a wait before a Lada entry did actually materialise.

The original plan had been for a two-car entry in 2006 before the new Priora was introduced in 2007, but it would be the 2008 season before the entry list featured two cars as Viktor Shapovalov’s Russian Bears Motorsport team took up the challenge.

The 110 WTCC would be a world away from the 90hp road-going version, but still looked outdated compared to the BMW 320si, Chevrolet Cruze, SEAT Leon and Honda Accord Type R that also featured on the grid and would fail to trouble the scorers in 36 races across 2008 and 2009. A finish of eleventh in Morocco for Kirill Ladygin was the best it could manage.

The 110 would however serve a purpose before the more modern Priora finally arrived in mid-2009, and allowed Lada to score points for the first time thanks to James Thompson – before the manufacturer took the decision to leave the series.

Returning in 2012 with the Granta, Lada showed it could be a serious contender as it won races with Rob Huff, including on the biggest stage of all on the streets of Macau. Further victories then followed with the Vesta, with the two later models being a world away from that outdated car with which Lada had taken its first steps onto the world stage. The car was built by the Dealer Sport team in 2008 and was powered by bio-ethanol, although it was running on regular fuel when it appeared at Mantorp Park for a demonstration run during that seasons STCC season finale.

Despite the best efforts of the team to secure factory support from Saab for the racing programme, having had some backing during the initial build, there was an air of uncertainty about whether the car would race in 2009 even after it appeared on the entry list with Jens Edman scheduled to drive.

In fact, it was barely 24 hours later when the team was forced to admit that it didn’t have the finances in place to contest a full season in the series, and had only raised around half of what it felt was required to develop and run the car.

As racing began, the Saab instead spent the early part of the year testing with a goal of racing at Gelleråsen after the summer break – but the team felt the car wasn’t ready and the season finale back at Mantorp instead became the focus.

However, a lack of spare parts after failures in testing meant the plans had to once again be put on hold, meaning the entire 2009 season had passed without the car turning a wheel in competition.

Testing would continue into the start of 2010 but after failing to race once again, the team decided that enough was enough and the plug was pulled. Even after brief speculation about a ‘return’ in 2012 without the bio-ethanol engine, the Saab 9-3 S2000 would ultimately be consigned to the record books as a ‘what might have been’. After the collapse of the original DTM (and the International Touring Car Championship that briefly followed) in the mid-1990s, it would be the 2000 season when the DTM was re-launched with a nine round calendar solely on German soil.

Both Mercedes and Opel would commit to the new series with factory programmes whilst Audi was represented – as it would be for a number of years – by the Abt team, running the TT-R on a semi-independent basis.

The inaugural season for the ‘new’ DTM should however have featured a fourth manufacturer, with the Zakspeed team – which had featured in the original series – having elected to build a Volvo C70 for its planned programme.

The German team had no support from Volvo themselves but was hopeful of attracting backing once the completed car – featuring a Judd V8 engine – hit the track for the first time.

Whilst the C70 was a quick car (some reports at the time said it was a bit too quick) and certainly looked the part, the support that Zakspeed was hoping to get from Volvo never materialised – with a programme in the DTM, and with the C70, not being of interest to the Swedish marque.

A lack of manufacturer backing was part of the reason why the project stalled and Zakspeed failed to appear on the DTM grid, with the C70 never being seen in the series.

Unlike the Saab above, the car would appear in competition as Zakspeed used it for a number of endurance events, the most high-profile of which was an entry into the Nurburgring 24 Hours, before the car was retired to the team’s museum to sit alongside a Calibra that it had hoped to run before the ITC was canned.

A scale model of the car complete in Volvo colours also resides in Volvo’s own museum.