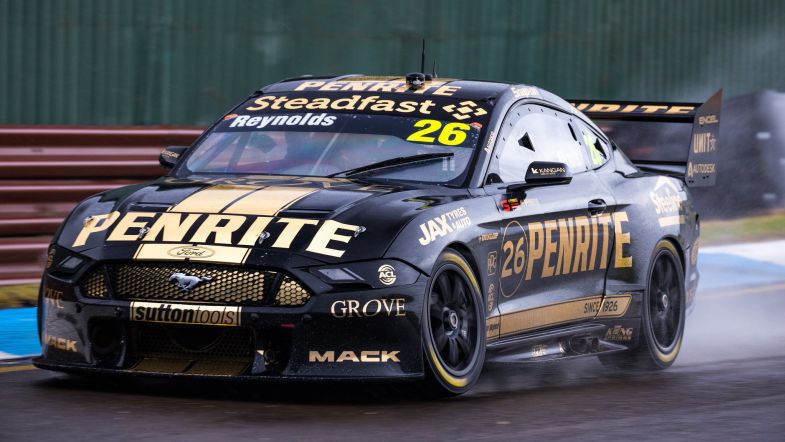 New Kelly Grove Racing recruit David Reynolds has said how proud he is of their efforts to score a third place in the last race of the Sandown SuperSprint weekend, taking his first podium with the team in his 350th race start.

After moving to KGR from Erebus Motorsport in a highly publicised split over the off season, Reynolds had only scored one top ten finish going into the last race of the round, a feat he managed in the season-opening race at Mount Panorama.

Bringing home an 11th place in race three and a horror finish of 22nd in the penultimate outing, Reynolds showed the true pace of the KGR car in the wet to close out the weekend, finishing with a clear gap to fourth to secure his first piece of silverware with the Braeside based team.

Driving in a special, retro-themed Penrite livery to honour the main sponsor’s heritage in the event they were the title sponsors of, Reynolds was proud to do them justice and show the improvement the team has been making.

“It was awesome today to get a podium in my 350th race at the Penrite Oil Sandown Super Sprint and do everyone at Penrite proud this weekend and bring home a trophy,” he said.

“It was shocking conditions, especially at the start, but I got a good start, moved up to P3 and then just kept my head down from there.

”It’s a really solid improvement from where we were last round, we were competitive all weekend and the car was pretty good to drive, particularly today.

“The first race today was pretty disappointing because we got turned around and the car was damaged, which is a little annoying because the car would have been just as quick in that race.

”We’re heading in the right direction as a team and I’m really proud of all the guys, it’s been an intense few weeks with a lot of changes to the cars but it’s started to pay off.”

He now sits ninth overall in the points standings, ahead of both drivers from Erebus but two spots behind team-mate Andre Heimgarter who has yet to finish outside the top 15.