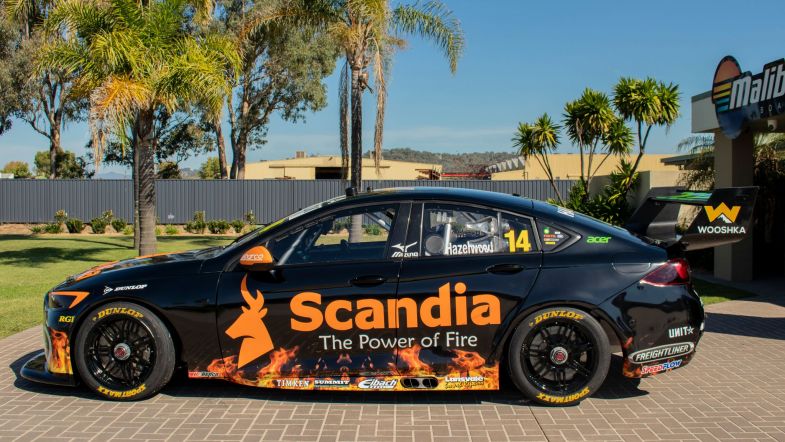 Brad Jones Racing has announced that Scandia will take on the role of primary sponsor on Todd Hazelwood’s Holden Commodore for the next round of the Supercars season in Tasmania.

The black and orange livery features dramatic flames to promote the company, which is experts in designing wood fires and stoves.

Dunlop Super Dealers and Cub Cadet Mowers backed the #14 entry at Bathurst and Sandown during the opening two meetings of the year.

“The Scandia Racing livery looks unreal,” Hazelwood said. “I love the black and orange, it’s going to really stand out on track.

“Thank you to Scandia for their support this weekend, hopefully we can do them proud with some solid results. It’s going to be great putting on a show for the Tasmanian locals who missed out on seeing Supercars in action last year.

“I feel the SuperSprint format will create some exciting races and it’s a great opportunity for the team and me to be fighting for podium finishes.”

Hazelwood will be looking to add to the two top ten finishes he has secured so far this season, with eighth place in race three at Sandown improving on the tenth place he picked up in the opening race of the campaign at Bathurst.

“The focus for us is to now turn that promise and speed into race results in Tasmania. I’m hungry for more and excited to see what the team and I can do together. My engineer, Tony and I are working well together and feel we’re making good gains behind the scenes.

“I feel it’s only a matter of time until we start to really show what we can do.”