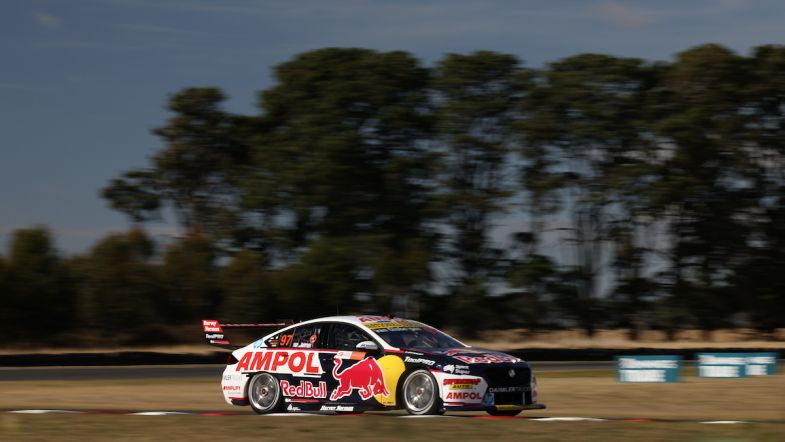 Shane van Gisbergen made it a record-equalling six wins from six at the start of a Supercars Championship season with victory in the opening race of the weekend at Symmons Plains.

Having stormed to pole position in dominant fashion earlier in the day, van Gisbergen was looking to lead the field away when the lights went out but it was the Ford Mustang of Cam Waters from alongside on the front row that made the best start.

Waters jumped into the lead on the run to turn one, with Jamie Whincup also managing to get ahead of van Gisbergen to move into second spot. That wasn’t for long however, with van Gisbergen reclaiming the place by the end of the opening lap when he slipped down the inside at the end of the back straight.

Somewhat surprisingly given the tight nature of the circuit, the whole field was able to make it through lap one unscathed although Nick Percat ran into drama on lap two when he was forced wide on he exit of turn four and hit the wall, resulting in him being forced back into the pits.

Waters led out front from van Gisbergen and Whincup, with Chaz Mostert – the practice pacesetter – holding fourth ahead of the two DJR Fords in the hand of Will Davison and Anton de Pasquale.

Further down the field, Jack le Brocq was a big mover up into P12 after a disappointing qualifying performance whilst going the other way was Jack Smith, who lost three places on the grid from tenth thanks to a penalty for impeding le Brocq in qualifying and then slipped back outside the top 15 in the early laps.

Water remained out front until lap nine when van Gisbergen managed to get a run through turn five and launched his Holden down the inside into turn six, repeating the move he had pulled on Whincup earlier on.

Immediately, the championship leader turned the screw and quickly gapped the Tickford Racing man behind, establishing a lead of over a second in little more than a lap.

Davison was the first man inside the top ten to pit early as he came in from fifth spot at the end of the eleventh lap, with David Reynolds following him in a lap later whilst running in seventh spot; a slow stop costing him valuable time when his car stalled and the Erebus man struggled to restart.

As van Gisbergen moved clear, Waters came under pressure from both Whincup and Mostert, with Whincup going up the inside into six and Mostert almost pushing the Triple Eight car through as Waters dropped from second down to fourth in one swoop.

De Pasquale was the next of the leading runners to put at the end of lap 15 and got the jump on Davison, rejoining just ahead of his team-mate as the two almost came together on pit exit.

Bryce Fullwood then had a moment at turn four which left his car stationary on the outside of the circuit, putting the field on notice for a potential safety car. Although he got the car going again, Whincup elected to dive into the pits from second spot, rejoining just ahead of the squabbling DJR pair.

Waters pitted on lap 20 from third spot and his race continued to go from bad to worse as he rejoined behind both de Pasquale and Davison, with Mostert also coming out behind the two Mustangs when he came in a lap later.

Van Gisbergen was comfortably clear of the chasing pack when he came in on lap 23 for his mandatory stop, swapping the two rear tyres and rejoining well ahead of Whincup to retain the defacto lead of the race behind those cars yet to pit.

The big battle was between Davison and Mostert for position, with the Walkinshaw Andretti United Holden swarming all over the rear of the DJR Mustang lap after lap before he finally managed to make a move stick at turn six to split the two Fords.

The positions would remain static from that point on towards the sharp end, with the big battles coming further down the order outside the top 15, with Todd Hazelwood and Zane Goddard going side by side for position and Reynolds battling hard with Tim Slade as he attempted to come back from his pit delay.

When Andre Heimgartner – who had started near the back – dived in to stop on lap 33, van Gisbergen moved back into the lead with his advantage over Whincup sitting at more than three seconds. The championship leader was able to cruise to the finish from that point on to add another win to his tally and further extend the gap at the head of the standings.

Whincup was equally comfortable in second spot ahead of de Pasquale, who made the most of DJR’s strategy call to secure a first podium of the year having made up four spots over the course of the race. Mostert followed him home in fourth having been unable to replicate the move he pulled on Davison, who would end up fifth.

Sixth for Waters was a disappointing result considering the pace he had shown earlier in the day and his storming start, with Mark Winterbottom, Scott Pye and Will Brown following behind. Brodie Kostecki rounded out the top ten after a solid performance that saw him climb five places in the sister Erebus Holden.

Van Gisbergen now holds a 153 point lead over Whincup, with Mostert 183 points in arrears in third.