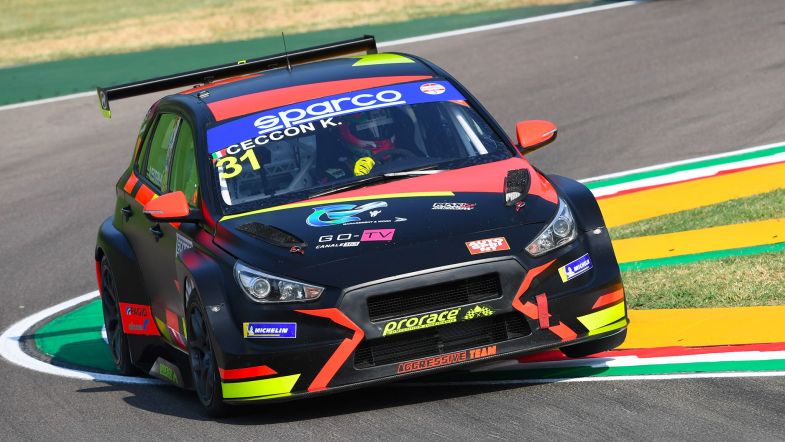 Kevin Ceccon wins at Imola and takes the championship lead

At the start, Volcano Motorsport’s Mikel Azcona made the most of his pole position to take the lead ahead of Ceccon and Igor Stefanovski from AKK Stefanovski, who gained two positions after a good start.

Martin Ryba, driving a Honda Civic Type R TCR of Brutal Fish, spun off the track on the first lap but was able to rejoin further down the field.

Evgenii Leonov, driving a Cupra Leon Competición, started an attack on Stefanovski for third place on the second lap, as leading driver Azcona came under increasing pressure from Ceccon.

Azcona suffered a puncture on the fourth lap, retiring to the pits and leaving Ceccon in the race lead.

Stefanovski and Leonov continued their feud, with both going wide at Rivazza on the fifth lap.

Nicola Baldan, who had been penalised with three places on the starting grid for overtaking a driver under yellow flags during qualifying, charged back up through the field, overtaking Salvatore Tavano for fifth place on the sixth lap.

Baldan then overtook his team-mate Antti Buri for fourth position at Tamburello on lap seven.

Championship leader Eric Brigliadori, driving an Audi RS 3 LMS from BF Motorsport, meanwhile reported issues in the hot temperatures, having to run his car with a 5% power cap to avoid damage, with Brigliadori running in eighth place.

Leonov came under fire from Baldan as both came to lap Giorgio Fantilli on the penultimate lap.

The Russian, who had an issue with his splitter, defended Baldan’s attacks during the last lap.

At the chequered flag, Ceccon took the victory ahead of Stefanovski, his first podium result of the season, with Leonov managing to fend off Baldan and Buri to complete the podium.

Tavano also managed to control Ruben’s attacks to finish in sixth place, with Brigliadori bringing it home in eighth place.

“It’s an important moment, we did a good race and we benefited from Azcona’s issue,” said Ceccon after the race. “It’s a great result for all of us.”

The result allows Ceccon to take the championship lead with 239 points, 13 over Brigliadori and 17 ahead of Buri.