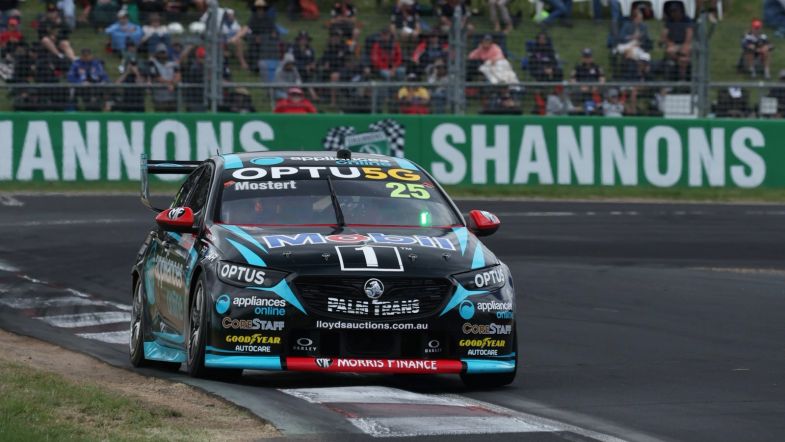 A wildlife-induced second safety car closed up the pack at the end of four hours of racing at Mount Panorama, with Shane van Gisbergen ending the hour ahead of long-time leader Chaz Mostert – but with Mostert having made an additional stop.

Barely a minute after the race entered the fourth hour, Garth Tander came in from the lead in the #888 Holden, which allowed Lee Holdsworth to reclaim top spot in the #25 entry as Walkinshaw Andretti United continued to run out of sync after the tyre failure in hour two.

Tander stayed aboard the car for another stint and came out to rejoin the track just as James Moffat came round Hell Corner, the pair running side-by-side up Mountain Straight before Moffat swept ahead into second spot – surviving a scare when he then got sideways but kept it out of the wall through Griffin’s Mount.

As Holdsworth held a comfortable lead at the front, Moffat was coming pressure from Tander for second spot; the pair making slight contract at The Chase on lap 87 when Tander tapped the rear of the Ford ahead.

Behind that battle, Tony D’Alberto continued to run in a solid fourth spot in the first of the DJR-run Fords, with David Russell in fifth fending off Craig Lowndes in the final car to be within a minute of the lead heading onto lap 90 of the race.

Holdsworth made the fifth stop for the #25 at end of lap 92 with his lead over Moffat standing at just under 40 seconds, rejoining in sixth spot as Moffat moved back into top spot with Tander fixed firmly on his tail in the battle for the lead.

D’Alberto was 13 seconds back in third spot, and five seconds behind him came the battle for fourth as Russell round himself under ever-increasing pressure from Lowndes – and Holdsworth was only a handful of seconds behind.

Russell came in on lap 95 to hand the #99 back to Brodie Kostecki having kept Lowndes at bay, but the fight between the pair had been fraught enough to allow Holdsworth to close onto the rear of the #88.

Sizing up the car ahead, Holdsworth got a run heading up Mountain Straight on lap 97 and slipped down the inside into Quarry Bend to grab fourth and then took third immediately when D’Alberto pitted the #11 from third to hand over to Anton de Pasquale.

Lowndes dived in from fourth spot on lap 98 to out Jamie Whincup back behind the wheel for his final stint as a full-time Supercars driver, with team-mate Tander then grabbing the lead when Moffat pitted at the end of lap 99 top hand over to Cam Waters.

Whincup rejoined just ahead of De Pasquale and Kostecki and was forced to defend hard to keep De Pasquale at bay.

Tander then came in at the conclusion of lap 100 to hand over to Shane van Gisbergen, putting Holdsworth into the lead of the race ahead of team-mate Warren Luff, who was still to make his fifth stop.

Van Gisbergen would rejoin in third spot ahead of Waters and a yet-to-stop Nick Percat, with the battle between Whincup, de Pasquale and Kostecki behind. Tim Slade and Will Davison rounded out the top ten as the final drivers still on the lead lap.

Luff came in to hand the #2 car back to Bryce Fullwood on lap 103 and he would rejoin ahead of Slade in eighth spot, leaving Holdsworth with a lead of almost 40 seconds as he prepared to hand the car over to Chaz Mostert for the run to the finish.

Before Holdsworth could come in however, the safety car was called for a second time as a result of an Echidna making its way onto the circuit at The Cutting.

Holdsworth came in from the lead as did Waters from third spot, putting Van Gisbergen into the lead of the race with Mostert rejoining behind in second and Whincup moving up into third. Waters meanwhile would rejoin in fifth spot behind De Pasquale.

The race would hit the four hour mark as the field circulated behind the safety car and backmarkers were waved through, with 53 laps left to run.