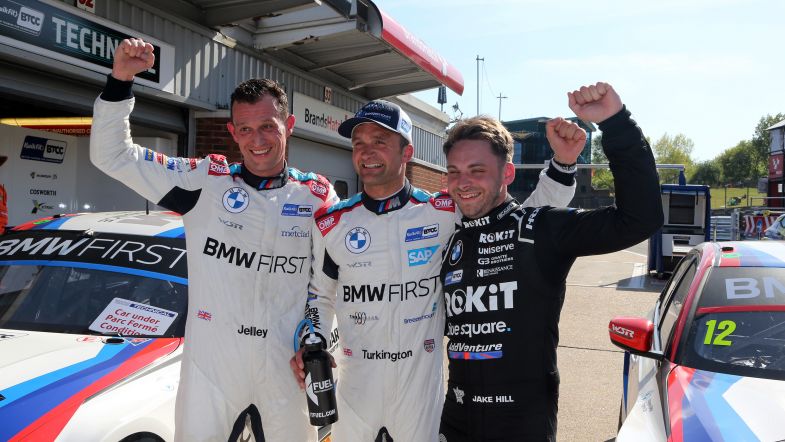 Colin Turkington led a BMW lock-out of the front two rows in qualifying for the second meeting of the BTCC season at Brands Hatch.

In a session that saw the qualifying lap record smashed – with the top 18 all under the record previously held by Tom Ingram – Turkington was able to grab a 25th career pole by the relatively large margin of 0.167s ahead of Jake Hill, with the third WSR-run car of Stephen Jelley heading row two.

Jelley lines up alongside Adam Morgan who was a solid fourth for Ciceley Motorsport, with the leading front-wheel drive car being the Honda of Josh Cook in fifth; albeit two-tenths of a second off the pace in his BTC Racing Honda.

Tom Ingram was quickest at one stage in the EXCELR8 Hyundai despite having no hybrid to make use of, and ended up sixth quickest ahead of impressive rookie George Gamble and the leading Ford Focus in the hands of Dan Cammish.

Rory Butcher – who was late starting the session due to an issue on his Toyota – and the Honda of Dan Rowbottom rounded out the top ten.

Missing from the sharp end of the grid was Ash Sutton, who was struggling to extract the most from the NAPA Racing Focus and will start back in 18th spot, with Jason Plato also struggling for pace in his Honda down in 22nd.

Showing how the close the field is however, the top 25 drivers were all within a second of pole.