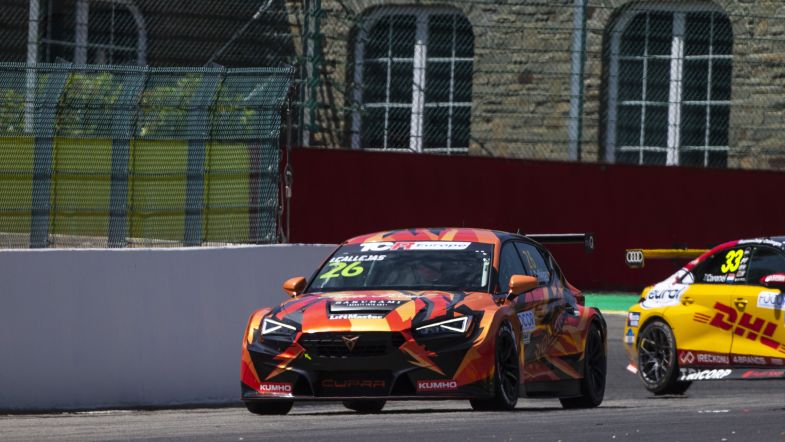 Volcano Motorsport’s Isidro Callejas became a TCR Europe victor aged just 17 in the first race of the weekend at Spa-Francorchamps, profiting from a final lap error by Franco Girolami.

Comtoyou Racing’s points leader Girolami started on pole, and had two Hyundais on his tail entering La Source for the first time as Callejas’s team-mate Klim Gavrilov was slow off the line from the front row.

Target Competition’s Nicola Baldan went for the outside into the opening corner while Josh Files snuck down the inside but had third placed starterCallejas alongside and stopping him from attacking Girolami on the run to Raidillon.

Files tried to pass Cupra León Competición driver Callejas into Les Combes but couldn’t do it there either, and further back Rubén Fernández was spun around at the same corner which resulted in the safety car being called out.

It was a similar story for Girolami on the restart on lap four, with the race length extended from eight to 10 laps due to the running under yellow flag conditions, as he made a strong launch in his Audi RS 3 LMS II and the Target drivers were the focus of attention again in their Hyundai Elantra Ns due to Felice Jelmini almost rear-ending his team-mate Baldan on the run to La Source and going sideways onto the grass to avoid an impact before even reaching the corner.

Girolami and Callejas raced away and there was little to separate the pair as they traded fastest lap on several occasions through the remaining laps.

It looked like Girolami had the win wrapped up though as they came to the final lap, but entering Les Combes for the final time he locked up heavily and had to take to the run-off – realising pre-race predictions that drivers who were pushing hard would end up taking too much out of their tyres in the 34°C heat.

And it meant there was room for Callejas to slip through on the inside and take his first win at the continental level.

Files and Baldan finished third and fourth for Target, escaping a frantic battle between Gavrilov and Girolami’s closest title rival Tom Coronel. Paul Ricard race winner Coronel has got up behind Gavrilov by passing Jack Young on the opening lap, then on the restart lap the pair drifted wide exiting the corner after Blanchimont as they disputed fifth.

Coronel attacked again into La Source and the end of the Kemmel Straight on the next lap, then on the descent to Bruxelles he even made contact with Gavrilov. There was still no way through, and Coronel had to wait until the penultimate lap to pass.

Jelmini finished behind them in seventh, while Jack Young, John Filippi and Jáchym Galáš had an intense battle for eighth that included Galáš controlling a sideways four-wheel drift exiting Les Combes as tyres were pushed to the limit. Despite that moment he was able to finish ninth, behind Young but ahead of Filippi who had a drift of his own into the gravel that resulted in him dropping to 12th.

Completing the top ten was Evgeni Leonov, who inflicted defeat on Viktor Davidovski in the Diamond Trophy classification.

The second race of the weekend takes place on Sunday, with a 11:35 CEST start time.