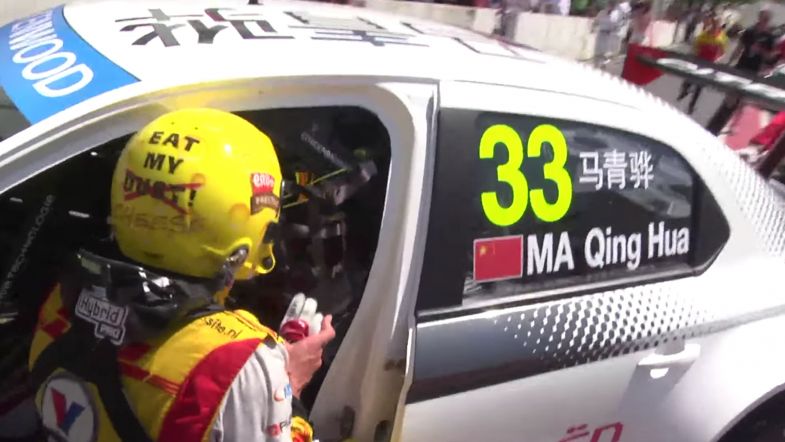 In the latest of our top ten series, we look at the most entertaining and controversial feuds in touring car racing, compiled by our European correspondent, Pietro Casillo.

ROAL Motorsport’s Tom Coronel was left fuming after this incident at Vila Real, Portugal in 2015. The Dutchman felt he had been blocked by the Citroën driver and failed to progress to Q2, which triggered his reaction. Coronel “had a word” with Ma, saying “What did you do? Are you stupid?”. Some curt remarks afterwards to the TV crew also landed the Dutchman with a fine by the FIA officials.

Volvo’s Rickard Rydell was overtaken by Nissan’s Anthony Reid just on the last lap at Druids, courtesy of a tap which had sent him wide and opened the gap for the Primera driver to sneak past. The Swede was upset after the race and confronted Reid, who described the move as a racing incident.

Holden Racing Team driver Mark Skaife made contact with Stone Brothers Racing driver Russell Ingall during the 2003 season finale at Eastern Creek, which ended his fight for second in the championship. Skaife waited for Ingall and showed his disappointment, with the Ford Falcon driver pretending to run over him in response.

Alfa Romeo’s Alessandro Nannini was fighting with Mercedes’ Klaus Ludwig in an attempt to retain the crown that Alfa Romeo had won in 1993 in the highly-competitive Deutsche Tourenwagen Meisterschaft. Ludwig’s stable-mate Roland Asch, who had been lapped by the Italian, tapped the Alfa into a spin. Nannini went back to the pits, changed tyres and chased the German, deliberately slamming into his C-Klasse under braking. The Italian’s car then caught fire due to the damage two corners later.

Vauxhall team-mates Yvan Muller and Jason Plato had a tense relationship at the end of 2001. The feud started at Donington Park with a couple of hard moves from both sides. A collision at Silverstone meant the Frenchman refused to shake hands with his team-mate on the podium, with Plato punished by the officials post-race. The team was completely split for the remainder of the season, which left Plato without a drive for the next two seasons despite winning the championship, with Muller still under contract to Vauxhall for the following year.

We enter the top five with a famous off-track row between Campos Racing’s Hugo Valente and Honda’s Gabriele Tarquini. The two had a close fight during the first two corners of the second race at Shanghai, with the Frenchman picking up damage and retiring from the race. After collecting the trophy for second on the podium, Tarquini was confronted by the Chevrolet driver, who accused him of being “too old”, to which the 2009 world champion replied his colleague was too young. The two then started insulting each other as Valente walked away as Tarquini was also taken away by a member of the WTCC staff. They would be team-mates the following year at Lada Sport.

Tom Coronel started on pole position at Mehdi Bennani’s home race in Marrakech, Morocco, sharing the front row with the local hero. The two came together at the start, with Coronel hitting the wall on the inside before bouncing across to the other side, where he was collected by Citroën’s Yvan Muller. The Dutchman’s Chevrolet was heavily damaged in the incident, and missed the next race in France as his new car was repaired. When Coronel confronted his friend Bennani, the Moroccan claimed he was crying in the car because he couldn’t avoid the incident with his friend.

The sustained rivalry between Matt Neal and Jason Plato is a part of the history of the British Touring Car Championship. The climax of that tension led to a pit lane altercation between the two at Rockingham in 2011, as Neal felt Plato had blocked him in qualifying and had run into the back of the Cruze in frustration. The Chevrolet driver showed the finger to his rival when he climbed out of the car, after which the discussion escalated to Neal promising Plato he would “rip his ******* face off”. Both were punished for the incident with a fine, three points off their licenses and a suspended grid penalty.

Jan “Flash” Nilsson and Roberto Colciago were the protagonists of one of the last feuds of the super touring era. The Italian claimed to have made a mistake under braking at the start at Gelleråsen, which left Volvo’s Nilsson stuck in the gravel. During the subsequent safety car period, Nilsson had already pointed his finger at Colciago. The Swede’s state of mind surely wasn’t helped by another incident between Colciago and another Volvo, as team-mate Jens Edman was also forced out of the race following contact with the Audi driver.

During a post-race interview, Colciago was insulted by Edman, who sarcastically congratulated him, before he was confronted by a furious Nilsson. The Italian tried to explain what had happened, but “Flash” looked like he would hit him, to which the Italian threatened to call the police.

The 1992 British Touring Car Championship season finale could easily be described as the most controversial moment in the history of the championship. Vauxhall’s John Cleland was fighting for the championship with BMW’s Tim Harvey and Toyota’s Will Hoy. Steve Soper, who had recovered from an accident at the start, was in a position to help team-mate Harvey.
Cleland was already unhappy when Soper overtook him for fourth, showing the middle finger to his rival, to which iconic commentator Murray Walker brilliantly covered with suggesting the Scot meant he was “going for first.”

Into Brooklands, when Harvey was already in fourth, Cleland attacked Soper for fifth, but the BMW driver closed the door and sent the Vauxhall with two wheels up in the air. The Scot was slightly ahead of his rival when the 318is launched itself up on the inside; the result was a contact which forced both to retire on the spot, with Cleland subsequently calling Soper “an animal.”