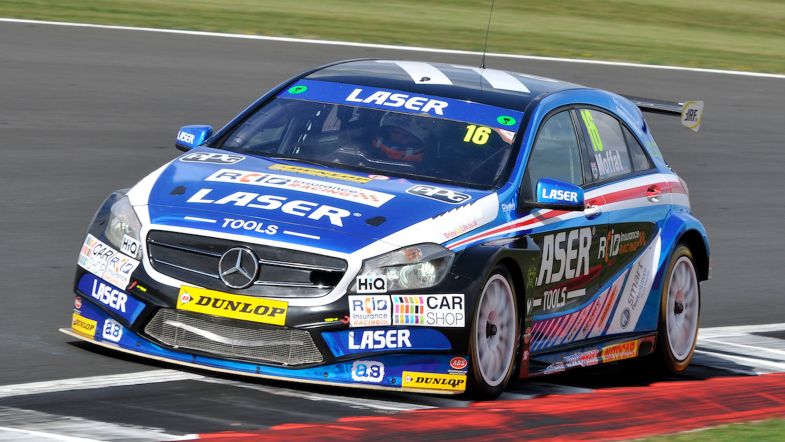 Aiden Moffat wins the final race of the day at Silverstone

Aiden Moffat has taken his first win since Brands Hatch 2017 in the final race of the day at Silverstone, the 16th different winner of the 2018 BTCC season, while championship rivals Tom Ingram and Colin Turkington completed the podium.

Moffat launched away well from pole position in his Aiden Moffat Racing Mercedes-Benz A-Class, while Jack Goff alongside visibly crept at the line in his Eurotech Racing Honda and also had a slow start as a result, falling behind the Simpson Racing Honda of Matt Simpson.

The safety car was out following a suspension breakage for Team Hard’s Ollie Pidgley on lap nine, with the race resuming with an epic six-car battle for the lead making the show, with Moffat holding off Ingram’s Toyota, which now had Rob Austin’s HMS Alfa Romeo, Colin Turkington’s BMW and the Motorbase Ford of Tom Chilton and Power Maxed Vauxhall’s Josh Cook right behind.

Turkington eventually passed Austin at Copse on lap 21 and began the top three began to break away, while the three behind traded paint for several laps as they battled for fourth, with Cook coming out on top ahead of Austin and Chilton, who recovered after an earlier scare with some bodywork rubbing on his rear-right tyre.

Moffat held on for the win, while Ingram had to switch to defend against championship leader Turkington, securing second and reducing the points deficit to 34 points heading into the final round.

Tom Chilton is the final driver in contention for the title, 64 points behind with 67 remaining, meaning Chilton would need to win the last three races at Brands Hatch with Turkington effectively not scoring in order to lift the crown.

The final round of the 2018 BTCC season takes place at the Brands Hatch Grand Prix circuit in two weeks’ time on September 30th.