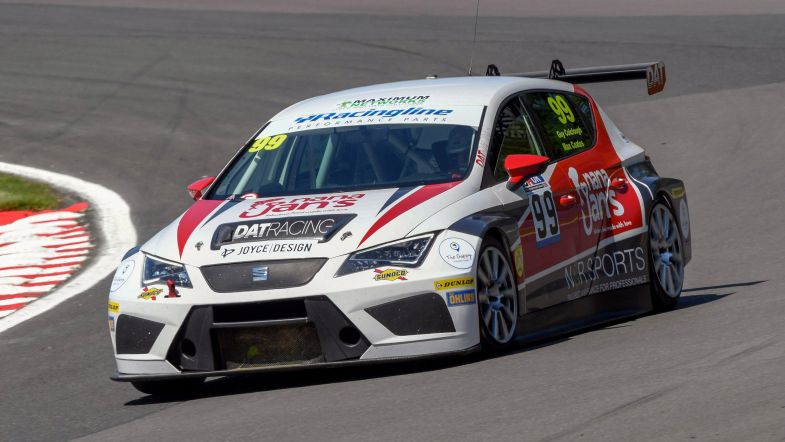 Max Coates secures victory on his debut at Donington Park

Max Coates has taken his first win in the Touring Car Trophy at Donington Park, overtaking Lewis Kent’s Hyundai on the final lap after the Hyundai driver had led throughout in his i30 N TCR.

Kent started from pole position in his Essex & Kent Motorsport Hyundai i30 N TCR, and led into the first corner ahead of Max Coates’ DAT Racing Cupra TCR DSG, with Darelle Wilson just behind in the DW Racing Vauxhall Astra TCR.

Behind, Henry Neal in the Team Dynamics Honda Civic FK2 soon passed James Turkington’s Ciceley Cupra TCR at the Old Hairpin, with Mark Wakefield then overtaking Turkington for fourth at Melbourne in his Maximum Motorsport Cupra.

Wakefield then passed Neal’s Honda on lap three and moved up to fourth, two laps later overtaking Wilson’s Vauxhall, who slowly began to fall down the order.

Meanwhile, Kent was holding on to a slender lead over the DSG-equipped Cupra TCR of Max Coates, but as the race drew on, the Hyundai eventually began to pull away.

But on the final lap, Coates closed in and stole victory by seven-tenths of a second in his Cupra DSG TCR, with Kent having to settle for second, but was the top car in the TCR UK classification.

Coates was the top classified Touring Car Trophy runner, with his Cupra TCR DSG not running to full TCR homologation, with Henry Neal second in the class, fourth overall, with Turkington fifth on his switch from the Supercopa to the Cupra.

Alex Day missed the start of the race and joined mid-way through, and wouldn’t be classified in the results in his HMS Racing Audi A4 BTCC.

The second race of the day is scheduled for 18:15 BST.