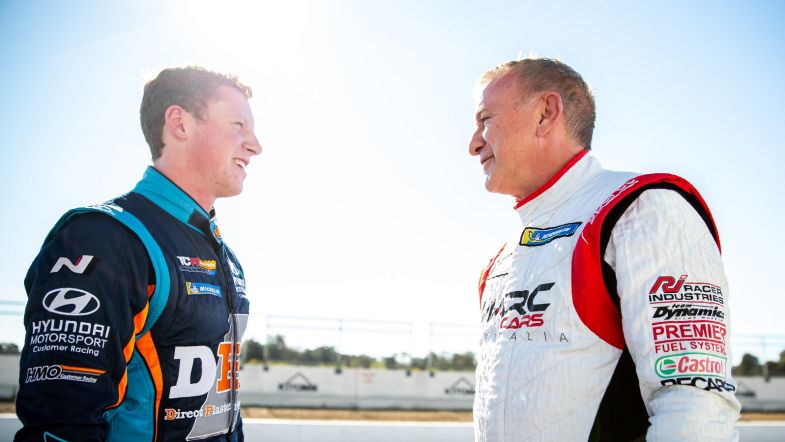 Australian motorsport veteran Russell Ingall has praised the young stars of the TCR Australia series after notching up another podium in the closing race at Winton.

The 2005 Supercars champion came home third after fighting through the pack over the day in the first race, making a quick start to jump up into the last podium spot in his Melbourne Performance Centre Audi RS 3 LMS.

Speaking after the race, Ingall said that the younger drivers in front of him, race winner Will Brown and team-mate Aaron Cameron, have potential to be stars of the future in the Australian racing landscape.

“We got a bursting start, I’m starting to get a hang of the starts in these things because they’re pretty tricky but it was a hard race because the two boys in front,” Ingall said.

“Will (Brown) was gone but I thought to keep the pressure on Aaron (Cameron to see how he’s going. The cars are from the stable, he’s got the same setup I have or near enough so I thought whatever he’s doing, I won’t do any better.

“All credit to Aaron, really great driver. I’ll tell you what: corporate Australia, if you’re listening to any of this, and you should be, look at the side of that car (Cameron’s). We’ve got to keep this guy in the category because he’s a very good driver, I sat behind him, he didn’t make a mistake.

“That’s what this category is about, young talent; if you support a guy like that, he’s got a good future.”

With the race win, Brown extended his championship lead for HMO Customer Racing while a strong weekend for Cameron jumped up to fifth in the standings after a strong weekend.