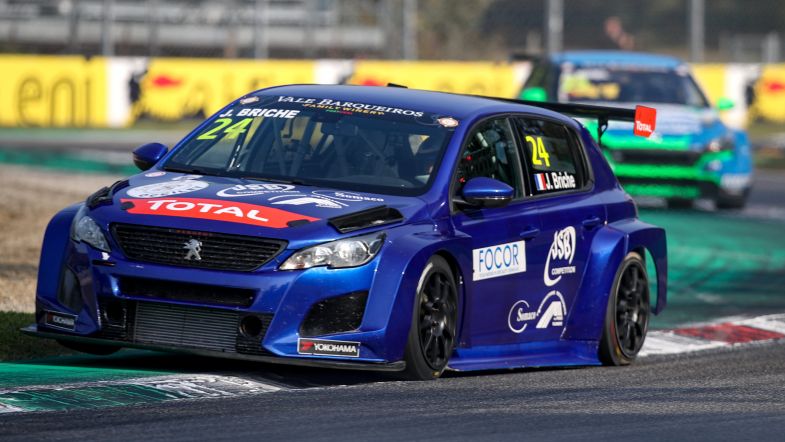 Julien Briché ensured the TCR Europe series title fight will go down to the wire after claiming a routine lights-to-flag victory in the penultimate race of the season at Monza.

The JSB Compétition Peugeot driver led away from pole position and was never headed throughout the 13-lap encounter which he won from DG Sport Competition’s Aurélien Comte by just over half a second.

Points leader Josh Files produced a sensational drive from ninth on the grid to finish on the final step of the podium in third, meaning he enters the final round of the season with a 33-point margin over Briché.

Both Peugeots got a decent start from the front row, with Comte slotting in behind his countryman as the pair braked for the first chicane.

Behind, Files briefly took to the grass as the pack negotiated the corner, but worked his way up to sixth by the end of the opening tour.

From then on, Files profited from slight contact between the Team Clairet Sport Peugeot 308TCR of Teddy Clairet and the Dan Lloyd’s Brutal Fish Racing Honda Civic Type R FK8 TCR at the second Lesmo, to move into fifth.

This then became fourth as Files completed a round-the-outside move on Comtoyou Racing’s Gilles Magnus at the entry to the Ascari chicane.

Briché and Comte were inseparable at the front, with the latter never seriously challenging the lead.

Files quickly closed onto the back of the Team WRT Audi RS 3 LMS of Santiago Urrutia and made a superb move past the Uruguayan under braking for the first chicane, with a patiently orchestrated manoeuvre.

The Target Competition Hyundai i30 N TCR driver closed to within a car length approaching the final Parabolica corner, keeping a tight line before getting the perfect switchback on the exit to take third.

Behind Urrutia, came Mat’o Homola in the second Target Competition i30 N TCR, following a race-long battle up the order.

The Slovakian was embroiled in a fierce squabble with Magnus and Target team-mate Andreas Bäckman and Lloyd for fifth, which ultimately went his way with an assertive move on Magnus entering Turn 1.

Lloyd had an eventual race in his Honda Civic, and his eventually unravelled after suffering a front left puncture with less than three minutes remaining.

The British driver had worked his back up into the top five after being shuffled into the gravel on the opening lap. He swapped places with Homola on consecutive laps before getting pushed off at the Lesmo curve again, which cost him a further two places.

Bäckman followed Magnus home in seventh, ahead of team-mate Dominik Baumann and Clairet. Nelson Panciatici rounded out the top ten.

The final race of the season is scheduled to take place tomorrow at 11:35 CET.