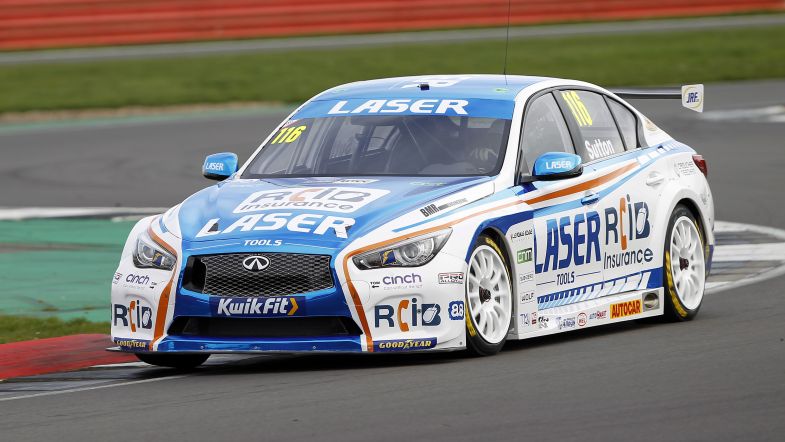 The team faced a race to prepare its two new Infiniti Q50s for the official test at Silverstone, with electrical work on Aiden Moffat’s car only being completed on arrival at the circuit.

Whilst the Scot would eventually go on to complete 44 laps across the day as he put mileage on his car, Sutton logged only 18 laps in his car, although a short run in the afternoon saw him post what would prove to be the ninth best time.

The team was set to head from Silverstone for Brands Hatch to complete further running with the two cars, which Sutton admitted was important ahead of the start of racing – whenever that may prove to be.

“The plan was for the test to be a glorified shakedown, and we definitely shook the car down!” he told TouringCarTimes. “We had some teething problems that we solved in the morning but then more appeared in the afternoon. There was nothing the team could do as it was engine related, and it ended the day.

“We still got a decent time on the board even though the run we did was only short. The guys told me the issue from the morning was gone so to go for it a bit, and I was just trying to see what the balance was like and how the car works compared to the Subaru.

“To get a good time under my belt gives me some real confidence as I wasn’t at the limit. I’m pleased with what is still to come and we just need to get some clean running. We’ll be going to Brands Hatch for a few days, but then we just have to shut up shop and see what happens in terms of going racing.”