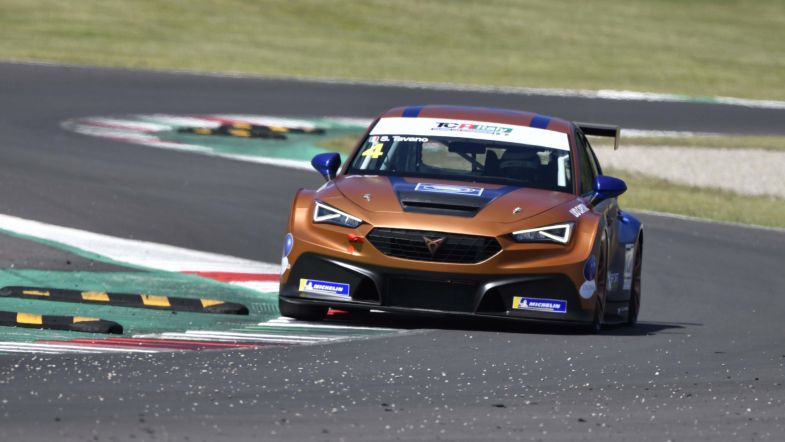 Salvatore Tavano produced a calculated drive to claim victory in the opening TCR Italy championship race of the season at Mugello, handing the new Cupra León Competición a winning debut.

The double reigning series champion, driving for Girasole, beat Target Competition’s Marco Pellegrini by 1.106 seconds, while Felice Jelmini profited from misfortune ahead of him to complete the podium after starting ninth.

Tavano qualified third but quickly made progress towards the head of the field after squeezing past slow-starting pole-sitter Eric Brigliadori for second at the first corner.

Pellegrini led the way initially but was immediately under attack from Tavano behind. The Hyundai i30 N TCR driver defended admirably for three laps before Tavano seized the advantage with a superb overtaking manoeuvre on the fourth lap of 14.

Tavano had the faster car from the off and opted to hang the León Competición around the outside of Turn 10 (Scarperia), which then became the inside of Palagio to take the lead.

Pellegrini briefly dipped a wheel onto the grass exiting Palagio and was subsequently forced to settle for second.

The Target Competition driver then took a trip through the gravel at Turn 12 (Correntaio) but held off Jelmini for second at the flag.

Behind the leading pair, there was disappointment for the early podium contenders as Brigliadori dropped out with mechanical issues just before half-distance. His BF Motorsport Audi RS 3 LMS slowed coming out of Turn 11, seemingly losing power, forcing Brigliadori back to the pits.

That dropped Brigliadori out of fourth but there was drama also for the man ahead, Franco Girolami. The Honda Civic Type R TCR driver, for MM Motorsport, ran in a comfortable third entering the final 10 minutes but suffered an apparent front-left puncture, forcing the Argentinean out of the race.

Girolami and Brigliadori’s incidents promoted Jelmini to an unlikely third place, having climbed his way up from ninth on the grid in his Hyundai i30 N TCR.

With the top eight reversed forming the grid for tomorrow’s second race, Guastamacchia will start from pole position alongside Carminati, while Tavano will have to work his way up from eighth if he is to claim a double win.

The second race at Mugello is scheduled to take place at 13:10 CEST.