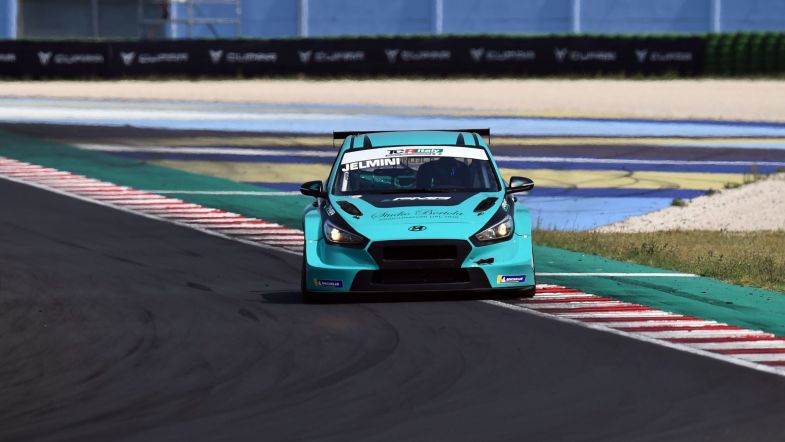 Felice Jelmini dominated proceedings in the opening TCR Italy race of the weekend at Misano, beating Eric Brigliadori’s Audi as others behind suffered drama.

Hyundai driver Jelmini, who was stripped of on-the-road victory at the opening round at Mugello due to a post-race penalty – took pole position in the morning’s qualifying session and led every lap of the 25-minute race.

Tavano made another lightning start in his Cupra, leaping from sixth on the grid to run fourth in the early stages. Everyone got through the first corners cleanly, although Francesca Raffaele’s BF Motorsport Audi RS 3 LMS was slow to get off the line.

Jelmini quickly opened up a 2.5-second advantage over Girolami, with Pellegrini having to defend third vigorously from Tavano, who slipped behind Brigliadori after the Cupra went wide exiting Turn 5.

Pellegrini and Brigliadori then piled the pressure onto the back of Girolami for second, with the Argentinean holding firm until a late front-left puncture caused his premature retirement.

Brigliadori then moved up to third when Pellegrini slid wide at the back of the circuit, his Target Competition Hyundai i30 N TCR losing grip at the fast Turn 13 and taking to the gravel.

That dropped him down to sixth and allowed Brigliadori and Tavano to take the fight to Girolami.

Mauro Guastamacchia had been part of the train but the Hyundai driver made a near-identical mistake to that of Pellegrini and slipped down the order.

Jelmini was untroubled out front and duly finished nearly 14-seconds ahead of Brigliadori and Tavano, with Pellegrini recovering to fourth.

The Elite Motorsport Cupra of Michele Imberti was seventh ahead of Pellegrinelli’s Girasole León Competición.

Guastamacchia will start from pole position in Sunday’s reversed-grid second race, with Raffaele joining him on the front row of the grid.