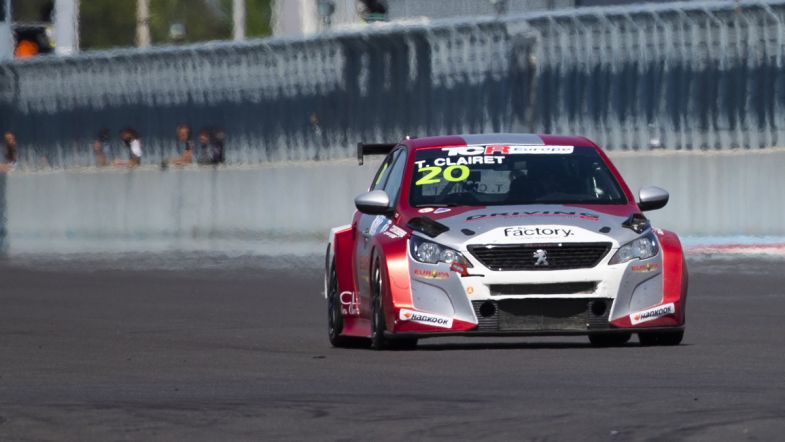 The Peugeot 308TCR was the car to beat throughout the 30-minute session, with Clairet initially setting the benchmark with a 2:15.978, some 1.170s quicker than Tom Coronel’s Comtoyou Racing Audi RS 3 LMS.

Clairet then improved to a 2:14.531 at around the halfway marker and kept the top position in what was a largely uneventful opening salvo.

Niels Langeveld was the best of the Hyundai Elantras in third, just over a tenth of a second in arrears of Teddy, thanks to a late effort in his Sébastien Loeb Racing car.

The VRC-Team Audi RS 3 LMS of Klim Gavrilov was fourth, nearly half a second slower than Clairet and was one of only two Audis to finish inside the top 10, along with Comtoyou Racing’s Tom Coronel.

Coronel had been Clairet’s closest challenger in the early going but slipped down the order to end up sixth, one place behind the PSS Racing Honda Civic Type-R TCR of Franco Girolami.

Sylvain Pussier was an impressive seventh behind Coronel’s Audi, with the second of the SLR Elantras Felice Jelmini eighth.

Points leader Mikel Azcona did not feature among the official times in his Volcano Motorsport Cupra León Competición, having run the whole session without a transponder.

His nearest rival in the standings, Mehdi Bennani (Sébastien Loeb Racing Hyundai Elantra) was just outside the top 10 in 12th, over a second off the leading pace.

Up next for TCR Europe is the second free practice session, which is scheduled to take place later on today at 16:40 CEST.