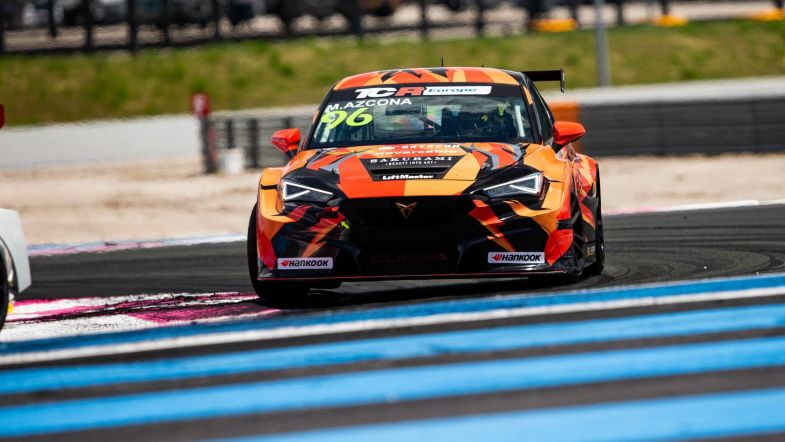 TCR Europe series points leader Mikel Azcona says he will need to maximise the rest of the races he contests this season after claiming his third podium of the year at Paul Ricard.

Azcona is dovetailing WTCR commitments with Zengo Motorsport alongside his TCR Europe drive and will definitely miss Spa-Francorchamps at the end of July, owing to his WTCR meeting at Adria.

Despite this, Azcona still believes he can fight for the title, with the Paul Ricard performance with significant weight compensation in his Cupra León Competición proof of its raw speed.

“We did than what was possible [before the weekend] because with 60kg in our car and 100kg difference between us and the Peugeot, I cannot do much [to compete] with them so for us, second place is very good result,” Azcona told TouringCarTimes.

“For now the championship is good for us, but I will unfortunately not participate in the next round because I have another meeting, so it will be difficult the next couple of races.

“It will be tough for me this year but I still this it’s possible to win the championship, if we make the most of the race I do. I have a good feeling with the car and our pace is really good even with a heavy car.

“Spa I will miss so it’ll make it hard, but I will do my best in all the races and hope to still fight for the title.”

Following his latest podium finish, Azcona has extended his points lead over Sébastien Loeb Racing’s Mehdi Bennani to 51 ahead of Zandvoort, while Jimmy Clairet moves up to third place on 87 points after his double podium weekend.

Franco Girolami is fourth in the standings after another solid meeting, but is just three points clear of SLR’s Felice Jelmini and Comtoyou Racing’s Tom Coronel.

Teddy Clairet, after scoring just three points in Slovakia is now into the top ten.