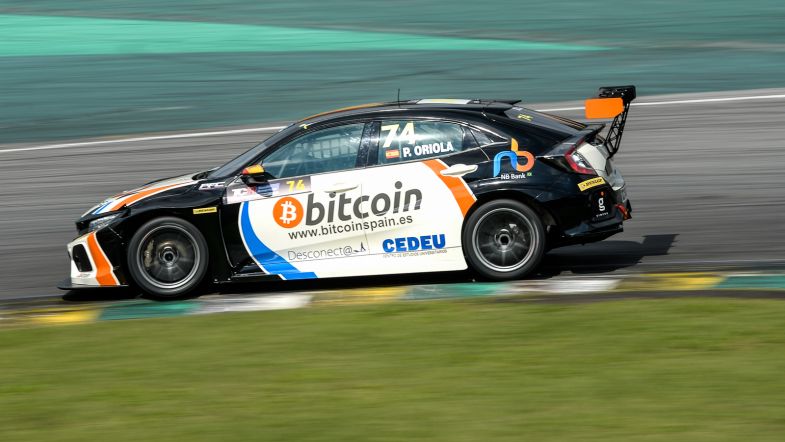 Pepe Oriola managed to win the second TCR South America race from tenth position on the grid for W2 Racing. He was joined on the podium by KMW Motorsport’s Paul Holton and 16-year-old Ayrton Chorne of Squadra Martino.

Gueciel De Andrade, who was supposed to start second, stalled as the cars were heading out on the formation lap and had to retire from the race due to a technical issue.

Adalberto Baptista of Cobra Racing Team started from the reversed grid pole position claimed the lead as the lights went out.

De Andrade’s team-mate Guilherme Reischl stalled at the start, with Fabio Casagrande of KMW Motorsports also getting away with a very slow start.

This allowed Oriola and Holton to jump to second and third respectively on the first lap behind Adalberto Baptista, leaving Chorne and Rodrigo Baptista in fourth and fifth.

Oriola and Holton managed to overtake Adalberto Baptista for second on lap two.

Chorne made contact with Adalberto Baptista on lap four and overtook him for third, with Rodrigo Baptista and Honda driver Raphael Reis following suit immediately after.

Oriola and Holton meanwhile had managed to open a gap of six seconds before the start of lap five at the front of the field.

Disaster struck for Reis on lap six, crashing heavily into Rodrigo Baptista at the Pico de Pato turn after what looked to be a brake failure or a stuck throttle.

The incident forced the safety car out on track – leaving just six cars remaining in the race as Casagrande pitted with a puncture, likely sustained from the debris on track after the crash.

Holton tried to challenge Oriola for the lead as the race resumed, but was unable to follow through.

Sapag managed to overtake Adalberto Baptista for fourth at the restart, only for the Brazilian managed to retake the position shortly after.

Oriola heads the standings on 54 points, Holton is second on 34 and Chorne is third on 26 points.

The second race weekend of the 2021 TCR South America season will be held at Curitiba, Brazil, on July 24-25.