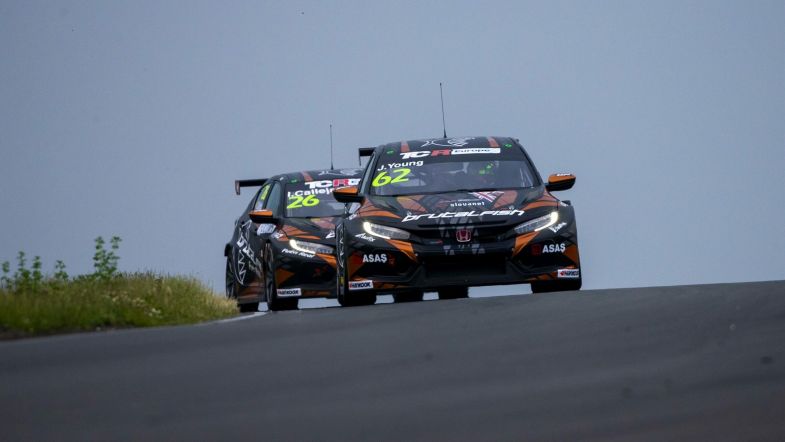 Young also made it a Honda clean sweep of practice, with PSS Racing’s Franco Girolami having topped the morning session.

Much like the first session, FP2 was run under blue skies and dry conditions with little in the way of drama for the 20 cars taking part this weekend.

After a low-key first practice, Comtoyou Racing’s Nicolas Baert was the early pacesetter in his Audi RS 3 LMS, posting an initial benchmark of 2:34.377.

This was soon beaten by the Sébastien Loeb Racing Hyundai Elantra of Felice Jelmini before Girolami leapt to the top of the times.

Azcona spent the bulk of the opening minutes in the pits before venturing out for his first competitive laps in the Cupra, and the 2018 Series champion went second quickest behind Girolami.

Both the Spaniard and Girolami were then pipped by Azcona’s team-mate Evgenii Leonov who set a 2:31.534, just three-hundredths ahead of the new second fastest Teddy Clairet in his Team Clairet Sport Peugeot 308TCR.

A final late flurry produced a much different leaderboard, as Azcona briefly went quickest before being beaten by Young, with Girolami vaulting back up to third ahead of Young’s team-mate Isidro Callejas.

Baert ended the session fifth fastest, four-hundredths clear of Sami Taoufik, with Leonov eventually tumbling down to eighth behind Jelmini.

The pair of Clairets, Jimmy and Teddy rounded out the top ten.

Qualifying for the opening race of the weekend is scheduled to take place on Friday at 12:30 CEST.