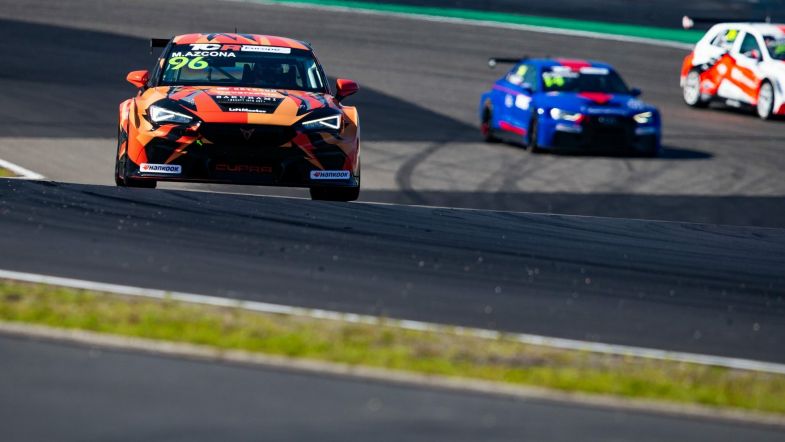 Azcona, who started fifth on the grid, made the most of a poor start from pole sitter Isidro Callejas to leap up to second on the first lap before engaging in a lively battle with Girolami’s PSS Racing Honda Civic Type-R TCR.

The pair were inseparable all range and even banged cars down the main straight in the closing stages, but Azcona struck late with a pass at Turn 4 to claim his fourth win of the season and extend his points margin.

Off the line, pole sitter Callejas bogged down and was swamped by both Girolami and Niels Langeveld into Turn 1 for the first time with Girolami assuming the advantage on entry.

Callejas fought back to reclaim his second place from Langeveld but the pair were then rounded by the fast-starting Azcona who leapt from fifth on the grid to run second after just four corners.

Girolami led the way out front from Azcona while Langeveld soon made it past Callejas at the chicane at the end of the second lap before joining the three car breakaway.

The trio gapped Callejas to the tune of 2.5 seconds, with Azcona and Girolami eventually dropping Langeveld as they disputed the lead.

Azcona had more speed than Girolami and kept the gap under half a second before he made a move for the lead exiting the final corner.

Under pressure, Girolami went to defend the inside line on the approach to the first corner and went slightly deep as the pair arrived on the scene. But Azcona was unable to make the move stick as Girolami kept his car on the inside line for Turn 2 to maintain position.

Azcona remained firmly on Girolami’s bumper however, and even gave the Honda a nudge from behind at Turn 3 with three laps remaining, blending out of the throttle to allow Girolami to maintain his place.

All the while, Langeveld had caught up to the pair and was within striking range heading into the closing two laps.

The battle continued to rage on in the final laps, with Girolami and Azcona banging door panels along the main straight before Azcona dived to the inside of Turn 1 in an attempt to seize the lead.

Again Girolami held firm but the Honda driver could not survive Azcona’s final-lap attack, with the Spaniard claiming the inside line for Turn 4 to claim the lead in dramatic fashion.

Azcona clinched the win by 1.4s at the finish.

Off the podium, Teddy Clairet finished fourth, with Tom Coronel the best of the Audis in fifth, just ahead of Klim Gavrilov.

Callejas eventually finished seventh, ahead of Dušan Borković who produced a great drive from 11th on the grid to finish eighth.

Sami Taoufik and Mat’o Homola rounded out the top 10.

Race 2 for TCR Europe is scheduled to take place on Sunday at 12:50 CEST.