The greatest BTCC race of all time

Many argue that the 1998 British Touring Car Championship race at Donington Park with Nigel Mansell was the greatest BTCC race of all time. But for me, a race from 1995 is at least on the same iconic level.

The race had it all:

The 1995 British Touring Car Championship races at Brands Hatch Indy was what really kicked off my love for touring cars as a kid. I’ve lost count of how many times I watched that VHS tape with the recording of the race that took place when I was eleven.

The concept of touring cars just blew my mind.

They raced cars that I could see on the streets and that I could identify with, and although Saab wasn’t involved in racing, it hit in the middle of the whole Volvo/Saab rivalry that was rather big among Swedish kids during the nineties.

There were actual heated arguments during breaks on whether the Volvo 850 or the Saab 9000 had the highest safety rating, and now all of a sudden, Volvo was racing in the BTCC with a Swedish driver against Audi, BMW, Renault, Ford and more. 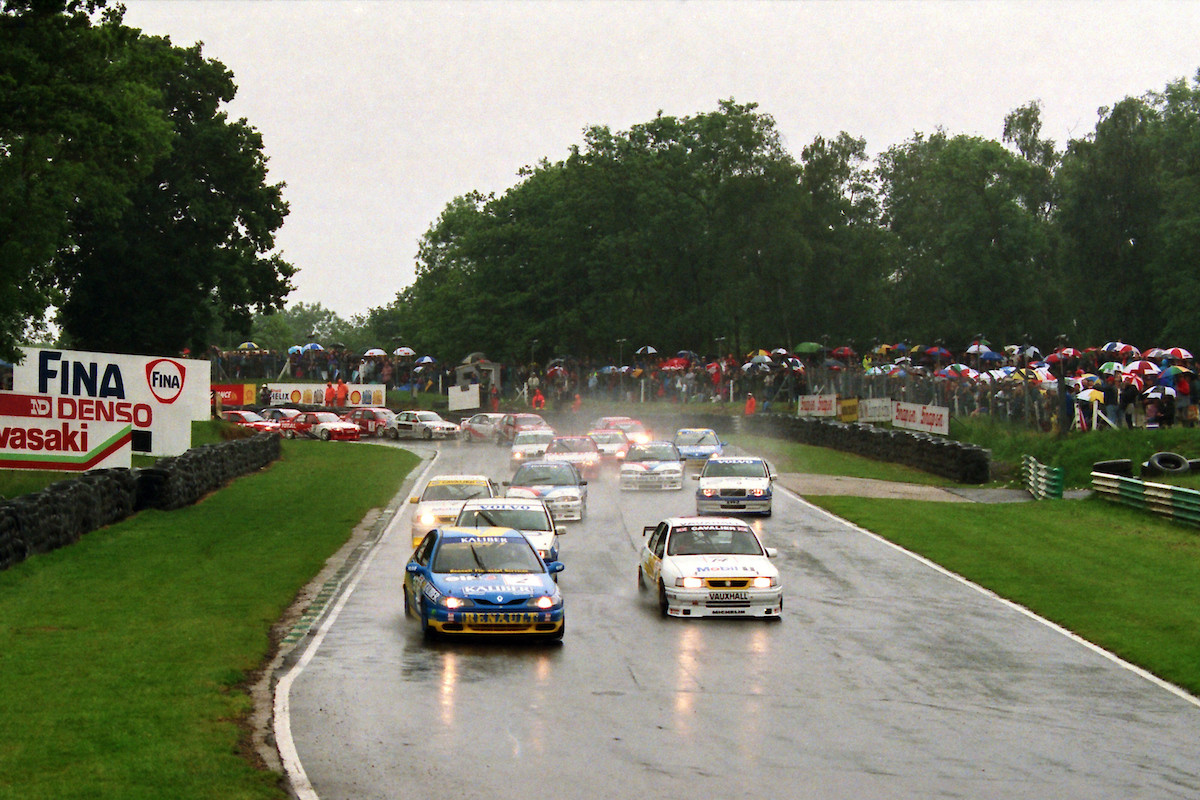 Back to the race at Brands Hatch in April of 1995.

Rickard Rydell had put the mighty Volvo 850 GLT Super Touring on pole position (his fourth in a row) but it was a car he had a hard time getting quickly off the line.

The start of the first race was held in dry conditions and arch rival John Cleland of Vauxhall out-dragged him into the first corner, only for the Volvo driver to retake the lead into Druids.

But the red flags were soon out as privateer Vauxhall driver Nigel Smith had stalled right at the apex of Druids.

This cued the first restart of two this weekend.

And just as the cars were about to get ready for the restart, rain started to fall, but it wasn’t pouring down – which left the teams desperately trying to make their choices between slicks, intermediates or wets.

The restart was a carbon copy of the first start, with Rydell being slow off the line, Cleland getting past and Rydell re-taking the lead heading into Druids.

And things went from bad to worse for Cleland.

“And Cleland is off! Into the gravel trap, there will be gravel everywhere in that Vauxhall! Och aye John the noo, you are off indeed!”

The legendary commentator Murray Walker’s iconic words as Cleland went off into Paddock Hill Bend. And it was to be more of that from the feisty Scottish driver this weekend. 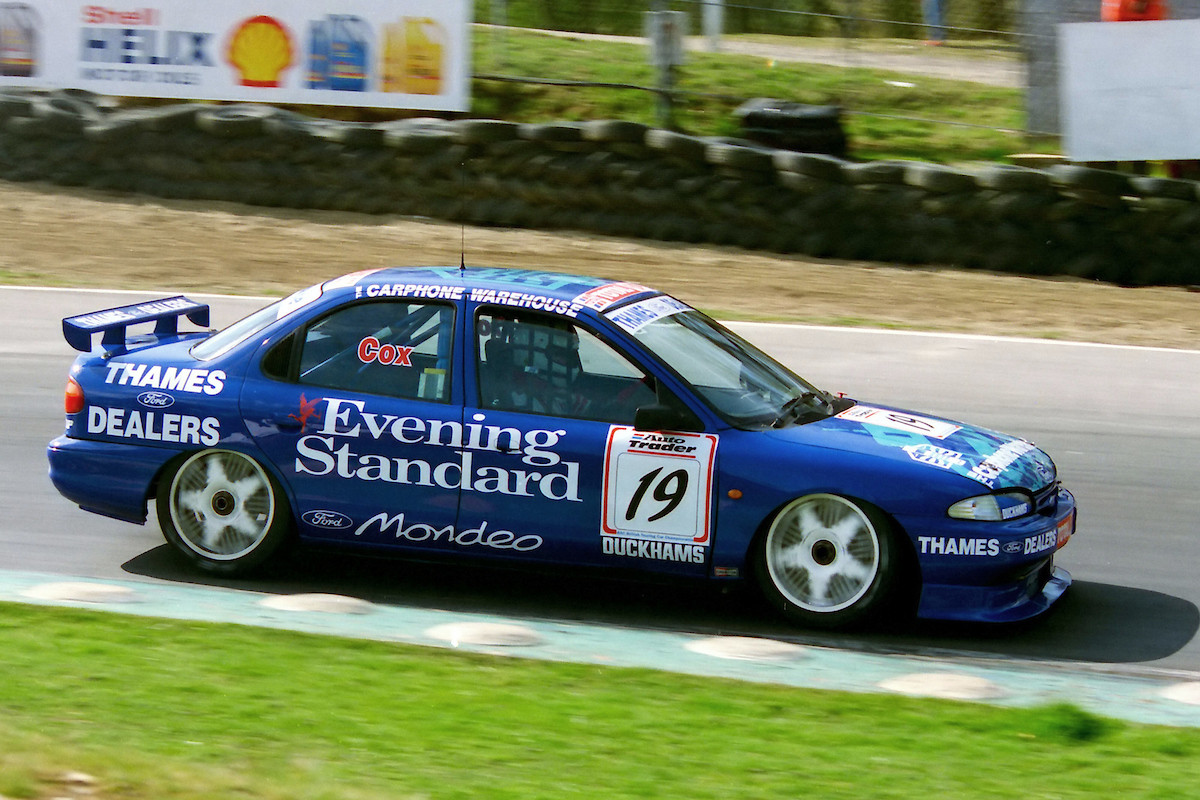 The Australian driver had fitted wets on his Ford Mondeo V6 Super Touring, while the majority of other drivers had gone for intermediates or slicks.

Cox drove around the outside of several works driver to the thrill of the crowd and provided an awesome show, crowning it with a spin at Surtees when he had fought his way up to sixth position from the back of the grid.

Cox got going again after having to wait agonisingly long for other cars to pass him before it was safe to rejoin the track.

The Australian fought his way back up to finish fifth, albeit a lap down on race winner and rain specialist Harvey.

But what about Rydell? 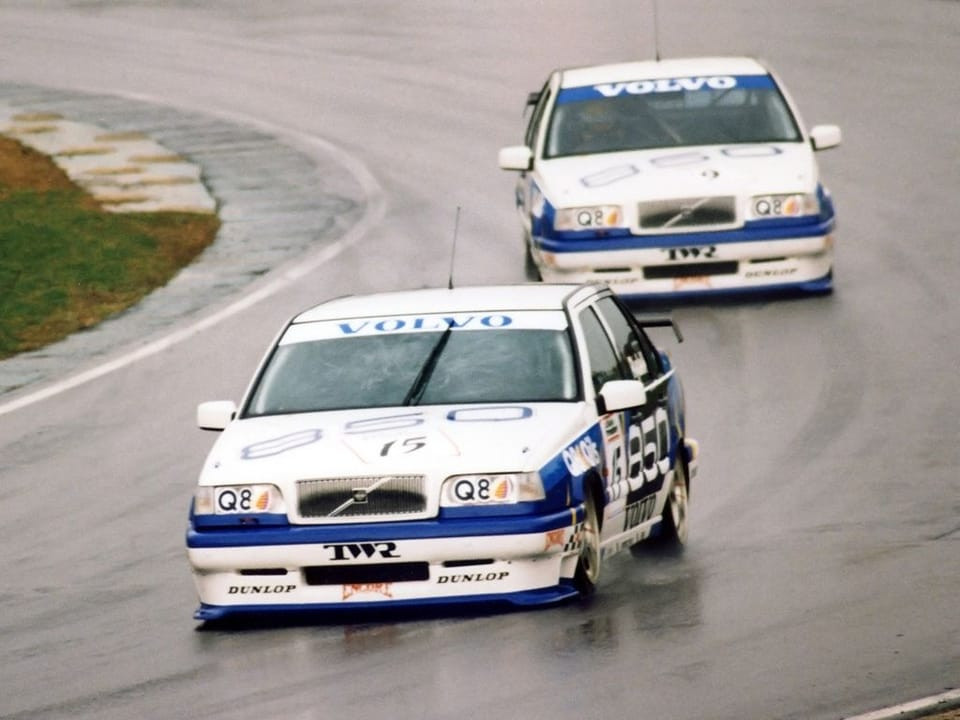 Disaster struck the Swede who had been leading while fighting a misting windshield.

Rydell had to admit defeat at mid-point of the race and headed into the pits for his crew to frantically trying clear the mist. The Swede rejoined the track later to finish twelfth.

The teams had just ten minutes between the first and second race, which saw even more frantic work for TWR Volvo as Harvey’s starter motor had failed. This forced the Brit to start from the pits instead of sixth.

And as the large crowd at Brands witnessed its third start of the weekend, it was deja vu.

Rydell was slow off the line and, you guessed it, Cleland rocketed past into the lead – only for Rydell to reclaim the lead a couple of corners later.

But his lead was to be short lived.

Both drivers were fortunately unhurt while their cars were badly damaged. Cue the red flags for a second time and the second restart.

And what happened this time?

Yes indeed: Rydell was slow, Cleland shot into the lead.

But this time Cleland put up a tougher fight to his Volvo rival.

Rydell tried to overtake Cleland around the outside at Surtees, only for the Vauxhall driver to slide sideways on his cold rear tyres, hitting Rydell and causing them both to spin off track. 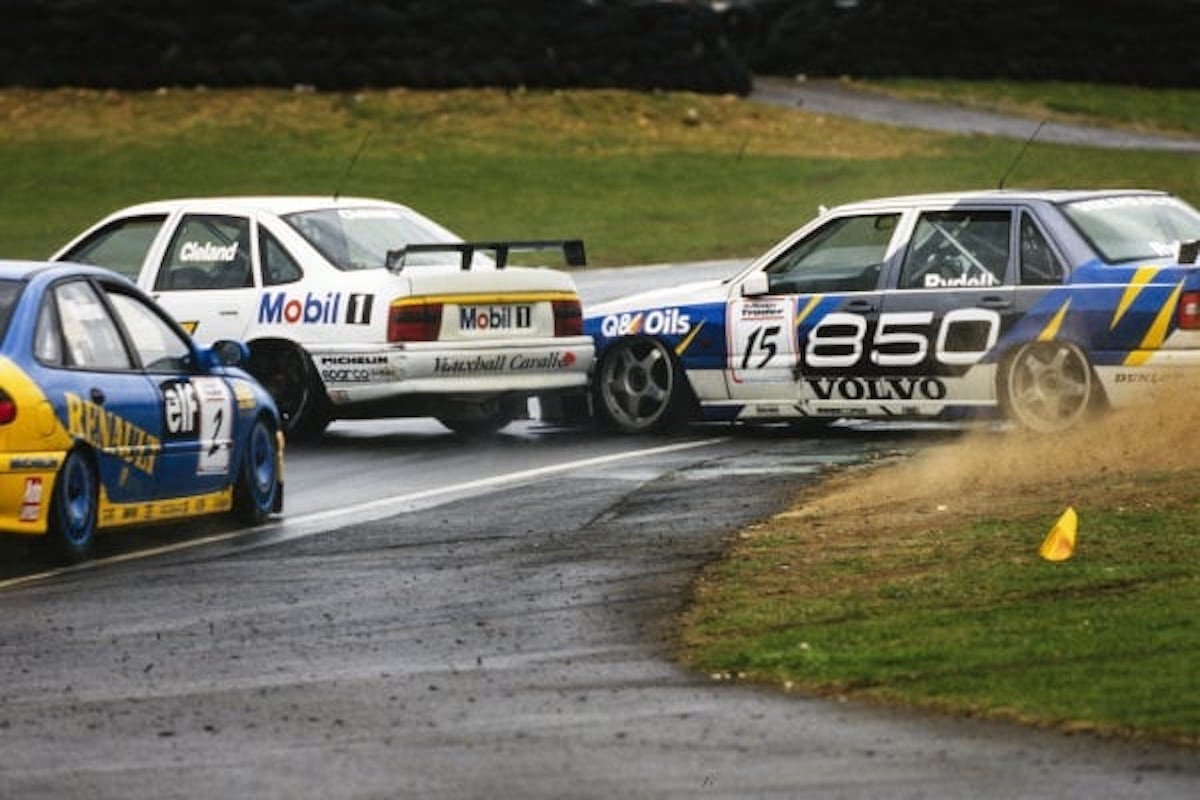 This handed Harvey the lead once again and the Volvo driver must have been in disbelief to find himself first after already having the luck of a restart that saw him back on the grid instead of starting from the pits due to his starter motor issues.

But the action wasn’t done just yet.

Cleland was slowly getting back on track again and managed to rejoin just as Harvey and the field came around a lap later.

And this saw Cleland, in a desperate attempt to not be lapped, starting a drag race with the Volvo driver through the main straight and into Paddock where disaster struck once again for the Vauxhall driver.

Cleland locked up his rear brakes, spun off the track and crashed hard into the barriers – right in front of Harvey, who commented on the incident after the race:

“Yeah, I think the old red mist descended a little bit on John, the old Scottish red mist came down from the hills. Because he hadn’t scored any points in the first race and had gone off and in fact I was coming round to lap him… and I don’t quite know what he was doing racing me, because he hadn’t completed a flying lap but he went into Paddock so quick, trying to out-brake me… but it was quite a spectacular shunt, I hope he’s all right but I nearly went off laughing myself.”

And as commentated by Murray Walker:

“Cleland is out of the car. He is okay but he is obviously very fed up with himself.”

Indeed. But what a show!

Harvey dominated the second race in the wet to claim a double win that weekend ahead of Vauxhall’s young signing James Thompson and Rydell in third, who had to fight his way up from the spin on the opening lap.

And that put an end to a sensational race weekend.

If you need to show someone what touring car racing is all about, show them this race.