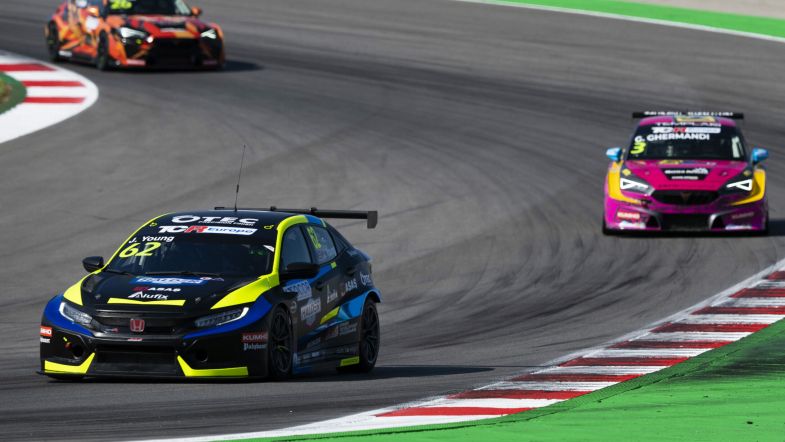 Young started second on the grid and followed Halder off the line before making a decisive move down the inside at the hairpin on the fourth lap of 12.

From then on, Young opened up a healthy margin over Halder, eventually coming home 2.24s clear at the flag.

Halder led away off the start as the pair of Halder Motorsport Honda Civic Type-Rs headed Baldan into the first corner. Further back, Comtoyou Racing’s Franco Girolami maintained his fourth place as team-mate Tom Coronel slipped back down the order.

Young stayed with Halder, never more than half a second in arrears and was allowed into the lead on lap four as Halder blended out of the throttle around the hairpin.

That gave Young the opportunity to pull a margin out front and the Northern Irishman duly achieved that. He was unchallenged for the remainder of the race and took the flag just over two seconds ahead at the finish.

Halder had momentarily looked like losing second place with Baldan and Girolami in close company. But the Honda driver was able to keep the Hyundai driver at bay until the end.

The action behind was frantic as Volcano Motorsport’s Isidro Callejas got the better of Girolami for fourth in a battle which raged for several corners.

Callejas initially got alongside the Audi RS 3 LMS on the fifth lap, temporarily getting ahead but Girolami fought back and dived back down the inside of the next corner. Callejas then passed Girolami at the penultimate corner but the places were reversed once more at the long sweeping final turn.

All this action brought the Target Competition Hyundai of Josh Files into the mix, but the 2019 champion had to quickly defend his sixth place from Callejas’s team-mate Klim Gavrilov on the run down the main straight.

Callejas did eventually get ahead of Girolami for good, with the latter suffering in the latter stages with a loose bonnet cover.

The order remained the same until the end of the race as things began to calm down.

Behind the top five, Files took a steady sixth place, ahead of Gavrilov and Coronel, with the Brutal Fish Racing Honda Civic Type-R of Pepe Oriola moving up one place from his grid position to finish ninth.