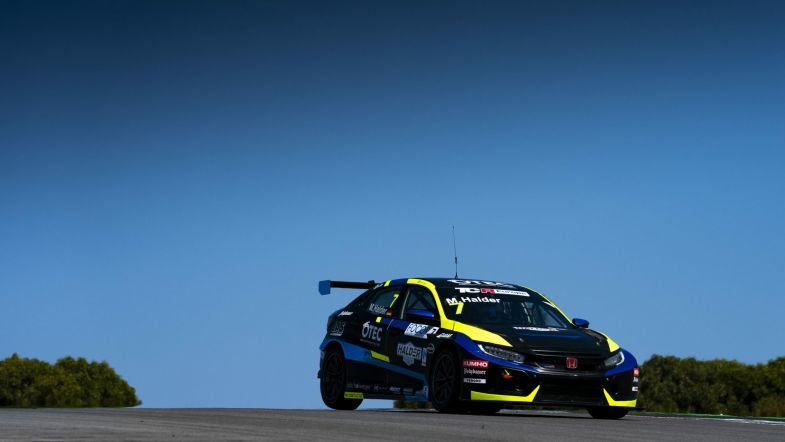 Mike Halder led a Halder Motorsport one-two for the opening round of the 2022 TCR Europe Series in an ultra-tight qualifying session at Portimão.

The Honda Civic Type-R driver only just made it into the second segment by the skin of his teeth in 12th place, but produced the best lap-time of the weekend to emerge just over a tenth of a second clear of team-mate Jack Young.

Free practice pacesetters Josh Files and Mat’o Homola could not quite replicated their Friday pace in Q2 and will start seventh and ninth respectively, with the top 10 covered by less than eight-tenths of a second.

As the session started, Janík Motorsport’s Jáchym Galaš was the first driver to set a benchmark time of 1:51.855, just a fraction of a second quicker than the Volcano Motorsport Cupra León Competición of Klim Gavrilov.

The pair would spend the majority of the session near the top of the times, with several others posting fastest times as the track conditions improved.

Homola briefly held the fastest time before being beaten first by Gavrilov and then by Young.

By the end of the first runs, Young was the quickest driver, but a swathe of improvements came in the final minutes.

Gavrilov returned to the top of the standings with his final effort of Q1, to go nine-hundredths faster than Young, who couldn’t improve on his best time, while Oriola moved himself up to sixth to assure his place in Q2.

Files then went fastest, but his Target Competition Hyundai Elantra N TCR eventually ended up in the middle of the top 10, as Comtoyou Racing’s Franco Girolami improved to third.

Scraping into the second segment was Halder, who managed the 12th quickest time, while sister Michelle Halder had to make do with 15th on the grid for both races. Another surprise exit from Q1 was Files’s Target Competition team-mate Felice Jelmini who could only manage 13th after a wild slide exiting the final corner.

Despite only narrowly making it into the second session, Halder was the first hit the top of the times at the start of Q2, with his 1:51.488 nearly two-tenths of a second faster than Files’s first attempt.

Oriola was third ahead of Homola, split by mere thousandths.

Continuing his strong pace from Q1, Gavrilov then went top but was soon beaten again by Halder’s ultimate pole time before the field came back to the pits. Young, on his first proper attempt went second quickest.

None of the cars could improve on their times on the final runs, with Halder cementing pole for Race 1 from Young and Target Competition’s Nicola Baldan.

Callejas will start fourth ahead of Gavrilov and Girolami.

The fellow Comtoyou Racing Audi RS 3 LMS 3 of Tom Coronel is seventh, with Files a somewhat lowly eighth ahead of the Sébastien Loeb Racing Cupra of John Filippi. Oriola rounded out the top 10.