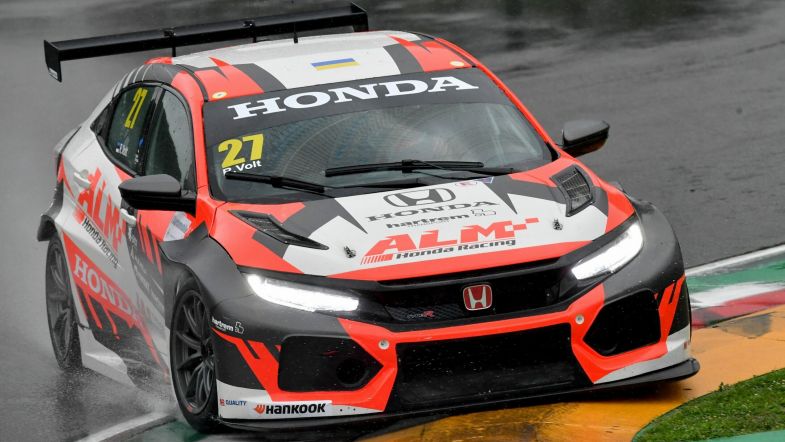 The Honda Civic Type-R duo went toe-to-toe for the bulk of the 25-minute session, held in overcast conditions, with Volt eventually coming out on top in the closing stages.

Vahtel dropped to 12th by the end as others made significant improvements on their final laps, with Niels Langeveld a close second and Carlo Tamburini third.

Volt was near the top of the standings all session and set an initial time of 1:55.139 to go over half a second clear of Langeveld’s Hyundai. The Estonian then lowered the benchmark even further before being beaten by Vahtel.

The pair exchanged quickest times until well after halfway through the session, with the interloping Giacomo Ghermandi slotting in between them momentarily.

Volt moved back ahead of Vahtel, who in turn improved again to go just over a tenth of a second quicker than his countryman, with Gil Fernàndez the next best some eight-tenths of a second further back in third.

With 10 minutes remaining, Taburini then launched his assault for the top spot by setting a time of 1:53.226, just under half a second down on Volt.

Tamburini then moved his Honda to the fastest time by 0.199s, demoting Volt to second.

Most cars came into the pits before their final efforts, with Volt eventually securing the top spot with his pole time of 1:52.353 to gap Tamburini to the tune of 0.220s.

Tamburini could not find an improvement and was dropped to third as Langeveld found extra pace on his last lap.

Jonathan Giacon was sixth quickest in his Fiat Tipo, just one-hundredth of a second faster than Imberti’s Hyundai i30 N TCR.

Fernàndez had to make do with eighth, safe in the knowledge that it would translate to Race 2 pole, while Antti Rammo and Felipe Fernàndez rounded out the top 10.

Past champion Salvatore Tavano had a difficult session, only managing 11th, just ahead of Vahtel.