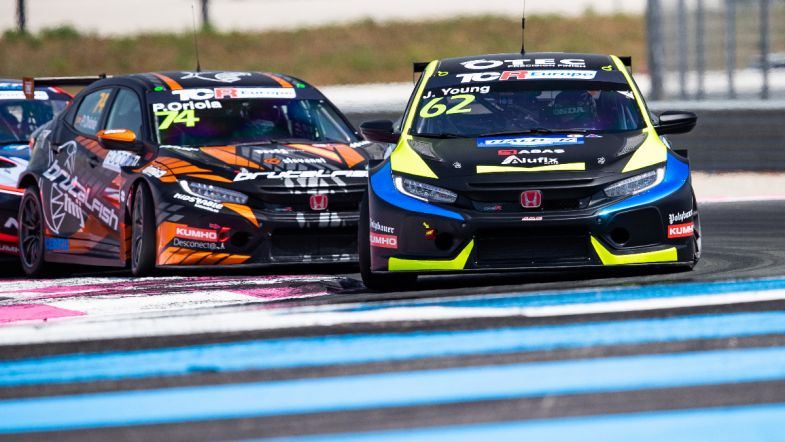 Halder Motorsport’s Jack Young has revealed the cause of his retirement from Saturday’s TCR Europe race at Paul Ricard, which has distanced him from the title battle.

Young was third in the championship standings coming into the race, and started sixth on the grid. After an early battle with fellow Honda Civic Type R TCR driver Pepe Oriola of Brutal Fish Racing Team he then settled into that position, only for a puncture to force him out of the race just as the final lap began.

The retirement means Young is now more than a win’s worth of points off the championship lead, and pending any penalties for incidents being investigated after race one he will start from fifth place on the reversed grid for Race 2 on Sunday.

“It was a good race up until the last lap there,” Young said to Touring Car Times of Race 1.

“I mean we were quickest Honda on track, so very happy and good pace with the car. We were just struggling a lot to put laps in consistently, and towards the end I felt a puncture coming on the front-left and there was nothing I could do to stop it.

“It was either slow down and lose 12 positions, or just go for it and see what happens. So we went for it and then it didn’t work. So we’ll have to go back to the drawing board and fix the problem before we go again tomorrow.”

After qualifying, in which Young was comfortably the fastest Honda driver between the Halder and Brutal Fish entries, his team-mate Mike Halder said Young’s pace had come from extracting the maximum out of the Civic when others couldn’t.

“I just like this circuit because I’ve been here a few times,” was Young’s response when the question of his pace was put to him.

“I was here with the Clios, at the world championships [in 2018], and I like the track a lot. We managed to extract the maximum out of the car, and it proved that we were fast in qualifying with 40 extra kilograms. I mean that’s positive, good pace in the car, but disappointing result.”