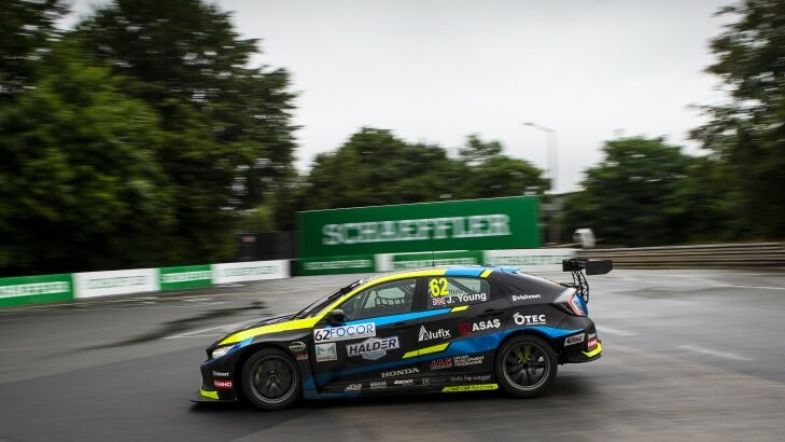 Halder Motorsport’s Jack Young was the fastest driver in TCR Europe’s first ever track session on a street circuit, topping practice one at a soaked Norisring.

Young’s benchmark 59.075-second laptime was set with five minutes to go in the half-hour session, and just moments before red flags were waved after Volcano Motorsport’s Isido Callejas crashed at the start of the lap after exiting the pits.

Callejas had been at the top of the timesheets early on when the track was at its wettest, with rain falling at the start of the day and into the first five minutes of practice, and the Cupra León Competición driver’s closest challenger was teenager Marco Butti, who is in only his second weekend in TCR Europe with the Comtoyou Racing-supported Élite Motorsport team and its Audi RS 3 LMS.

Butti had actually been first to set the pace, and he returned to first place just at the halfway mark by becoming the first driver to lap in quicker than 61 seconds.

Many drivers pitted to change tyres after that, but staying on compounds suitable for wet conditions despite the slow appearance of a dry line through much of the track, with Target Competition’s Felice Jelimini knocking Butti off top spot with 11 minutes to go with a 1:00.452 lap in his Hyundai Elantra N.

The drivers in the Hyundai teams were noticeable in running closer to the pitwall, avoiding the crowning of the road down the pit straight and actually sticking to the wetter line. Despite this, they soon filled all of the top places as Josh Files took over first place by breaking the minute barrier, whilst Jelmini improved in second place with a lap just 0.020s slower and Mat’o Homola went third fastest.

Nicola Baldan made it an all-Hyundai top four, and Files found more pace with eight minutes remaining as he set a 59.248s lap. That wasn’t enough to keep him on top though, as Young improved on his final lap to put his Honda Civic Type R on top of the order.

The aforementioned Hyundai drivers were the only others who broke the minute mark, with Young’s team-mate Mike Halder sixth fastest and 1.1s off the pace.

Aside from Callejas’s crash, the only other drama in the session was an issue with Giacomo Ghermandi’s Cupra. The Lema Racing driver could not turn his rear lights on and was shown the black-and-orange flag for the issue, but with the radio also not turning on it meant his team was unable to inform him of the problem as all drivers are mandated to have the rear lights on during wet sessions.

Tom Coronel’s Comtoyou stand-in Stian Paulsen was 2.591s off the pace in 16th place, while TCR Germany regular Patrick Sing did complete two full runs but did not have a functioning transponder so the team did not know what his pace was.