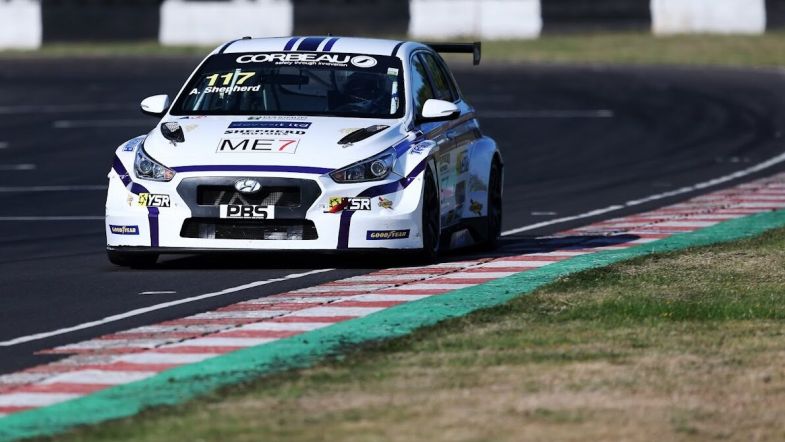 Adam Shepherd put his Castle Combes demons to rest by taking a dominant TCR UK victory in the opening race at Donington Park.

Points leader Chris Smiley completed the podium in third as Isaac Smith could only manage seventh in his Volkswagen.

“Finally, it’s a long time coming, so I am happy with that,” Shepherd said post-race.

“My start wasn’t the best but I thought ‘nobody’s going around the outside of Redgate’ and then I got a big hit so was managing that problem until the end of the race.

“I probably dropped about six seconds on the final lap, and I was having déjà-vu from Castle Combe but I’m happy I made it to the end.”

Off the line, polesitter Shepherd got the early jump to hold the lead into Redgate for the first time as Hart leapfrogged Smiley for second.

Behind, contact between Scott Sumpton and Ant Whorton-Eales on the exit of Redgate brought out the safety car, with Sumpton coming to a halt before the Craner Curves with front-end damage.

Shepherd maintained his lead at the restart but had Hart in close pursuit, with Smiley dropped ever so slightly on the second proper racing lap.

Key movers at the start were Isaac Smith and Lewis Kent, making their way up from 11th and 13th respectively – Smith having qualified eighth but with a three-place grid penalty following his Castle Combe incident last time out.

Kent, despite feeling under the weather, settled into seventh after the restart but fell under pressure from a charging Smith who was keen to make inroads into Smiley’s championship lead. Smith’s efforts to make it past Kent allowed the Hyundai Veloster’s team-mate and brother Bradley Kent past at the chicane.

The pressure on Smith at the bottom of the top 10 eased substantially after Bradley Kent took to the grass on the exit of Coppice, while an off for Callum Newsham at the final corner enabled Jamie Tonks to move up to ninth.

Shepherd, meanwhile, was largely untroubled in the lead, having established a gap of over 1.5s on Hart, whose pace dipped after half-distance. The Irishman in the Hyundai i30 N TCR then saw his season take another turn for the worse as he was forced into the pits with a mechanical issue, all but extinguishing his title aspirations.

Backing off in the final laps, Shepherd kept it clean to come home seven seconds ahead of Winfield, who just fended off Smiley – who suffered from a loss of power steering in the middle of the race – and Jac Constable to claim second at the flag.

Behind Constable, the Hyundai i30 N TCR of Alex Ley finished fifth, ahead of the recovering Veloster of Lewis Kent and Smith’s VW.

After a slight off in qualifying, Jamie Tonks brought his Cupra home eighth, while Matt Wilson and Diamond Trophy winner Andy Wilmot completed the top 10.