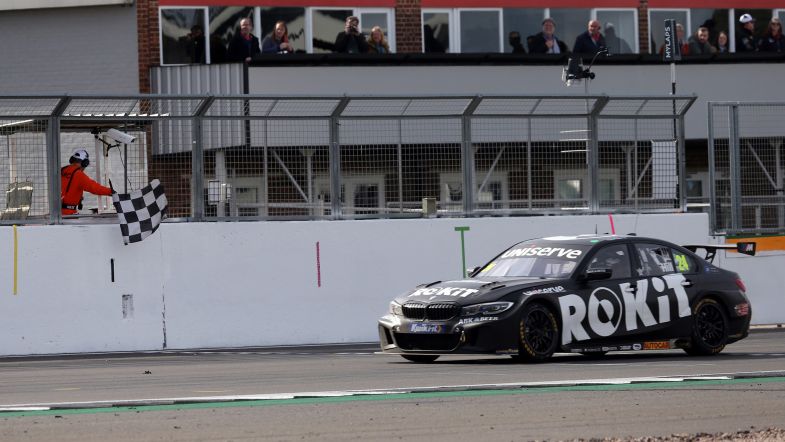 Jake Hill has closed in on the lead of the BTCC standings after battling his way to victory in the second race of the weekend at Silverstone.

Hill had started the race from second place behind Rory Butcher, and it was the Toyota that held the lead when the lights went out – with Hill dropping back to third on the opening lap when Gordon Shedden managed to get ahead of both him and Adam Morgan going into Brooklands.

As Butcher scampered away at the front, Hill nipped ahead of Shedden at Luffield, just before the safety car was deployed to recover the Infiniti of Dexter Patterson from the gravel at the same corner.

Butcher held the lead at the restart but on lap eleven, Hill drew alongside through Woodcote and slipped through going into Copse to hit the front before a further caution period when Ricky Collard pulled off with flames coming from underneath the bonnet of his Toyota.

Hill nailed the restart to drop Butcher behind and ticked off the final laps in comfort to secure victory and close to within two points of the championship lead.

Butcher followed behind in second place ahead of Shedden, with the two Scots squabbling over the position through the closing stages ahead of a titanic fight for fourth.

Ash Sutton, Adam Morgan and Tom Ingram would run together throughout the race, with Ingram managing to get ahead of Morgan with a fine move around the outside at Brooklands on lap five.

Ingram tried to get ahead of Sutton between the two Safety Car periods but almost dropped back behind Morgan in the process – with Sutton eventually holding on to fourth ahead of Ingram and Morgan.

Dan Cammish took seventh spot ahead of Josh Cook – who will start race three from pole – with the top ten completed by Team HARD duo Bobby Thompson and Aron Taylor-Smith.

After his issues in race one, Colin Turkington moved his way up to 13th place to salvage a handful of points.

Sutton now leads the standings by two points ahead of Hill, with Ingram and Turkington eleven and 14 behind respectively. Butcher and Cook remain in contention, albeit more than 70 points behind.