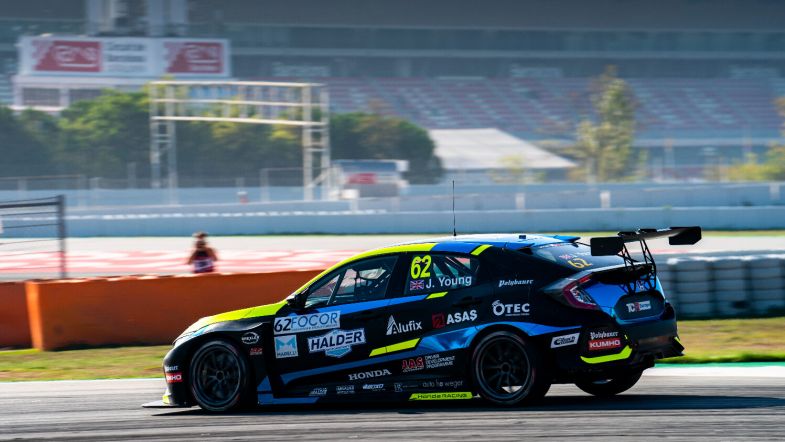 Halder Motorsport’s Jack Young claimed his second win of the TCR Europe season in the opening race in Barcelona, holding off Tom Coronel.

Young converted his second series pole position into victory, his fifth podium finish in TCR Europe, by making a strong start and then looking after his tyres once Coronel started to put him under consistent pressure.

There was no room for an overtake, and Coronel’s Audi RS 3 LMS started sliding with what appeared to be overheating tyres after several laps in Young’s wake.

With a few laps to go, the gap between the pair went from being a few tenths of a second to close to a second, enabling Coronel to run in some slightly cooler air and allowing him to set up an attack again at the end of the race.

But Young had enough pace to maintain the larger gap in his Honda Civic Type R, and he took his first win since the 2022 season opener at Algarve.

Coronel’s Comtoyou Racing team-mate Franco Girolami, who was crowned champion in qualifying, finished third but came under a lot of pressure from Frédéric Vervisch.

The Comtoyou pair both passed Volcano Motorsport’s Isidro Callejas at the start, although Callejas was able to reclaim fourth place after a few corners.

It took half of the race for Vervisch to then get back ahead of Callejas, and he then closed in on Girolami and filled his mirrors through the final laps. Although close enough to make a move on a number of occasions, he did not risk a dicey manoeuvre as the cameoing Belgian’s main intention was to secure a haul of points in the teams’ championship to help Comtoyou beat Target Competition to the title.

Callejas followed them home in fifth, and Jáchym Galás finished a lonely sixth.

Pepe Oriola ran in seventh until race control asked him to concede a place after he exceeded track limits at turn one, and that meant he finished eighth behind Target’s Nicola Baldan.

Josh Files, who is leading the fight to be runner-up in the championship, charged through from the back of the 22-car grid to finish ninth. The Target driver started at the back due to an engine change, and took only a few laps to make it up to twelfth. A bold move on John Filippi at the hairpin earned him eleventh, and he thenspent several laps sat behind Klim Gavrilov and Mike Halder until contact between the pair set up a chain of events that brought Files into ninth.

Halder made light contact with the rear of Gavrilov, which led to some bodywork rubbing on his car and then eventually falling off. More of the rear bodywork started flailing in the laps after the contact, making it harder for Halder to pass, and then at the penultimate corner Halder ran wide and it allowed Files to squeeze through down the inside.

Files then passed Gavrilov at turn two on the next lap, with Halder trying to follow through in the next corners but unable to get by until the damage became too much for Gavrilov’s Cupra León Competición and he dropped to twelfth behind Filippi.

Further down the order there was drama as Michelle Halder was spun around, but still managed to finish 16th, Evgeny Leonov flew off at the hairpin on the opening lap but recovered to finish 18th, and on the last lap there was a crash between Rubén Fernández and Giacomo Ghermandi.